The Return of our Quick Fire Questions: Ross Williams Of The Daily Jaws Answers Our Questions 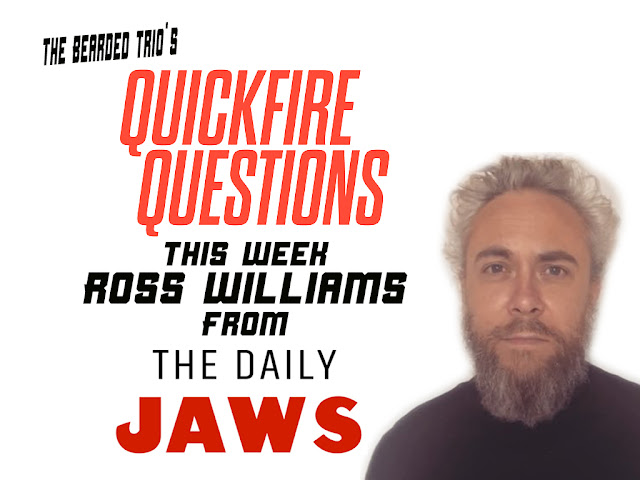 It's back!  Yes, after a three year break we have brought back our Quick Fire Questions.  What is it you may ask?  Well, if you've watched James Lipton's Inside The Actor's Studio then you will be aware that at the end of the interview the guest will get asked a set of random quick fire questions.  The idea is not to think too much about the question and just have some fun.

In the past we've featured guests such as Jimmy Mac of RebelForce Radio, singer Darren Hayes, E.T's Robert MacNaughton and Nathan Hamill to name a few.

To kick start the new round of Quick Fire Questions we have Ross Williams from the extremely popular Jaws website, The Daily Jaws.  Ross created the site back in 2015 and it has become the number one source for all things Jaws.  Recently, they hit the news with their recent #WeMake project where they recreated the whole movie made up entirely of fan recreations.  If you've not seen it yet then you need to watch it.  It's extremely funny and shows how creative the fans of Jaws are.

You're stuck in a swamp on Dagobah (Star Wars). What one movie, TV show, album and book would you take?
Jaws, Breaking Bad, Dark Side Of The Moon, To Kill A Mocking Bird
If you could invite any three people (alive or not, fictitious or not) to a dinner party, who would they be?
Stephen Fry, Muhammad Ali, Amal Clooney
What is your favourite John Williams soundtrack?
Jaws (Surprising - Rob)

If you were invisible for a day what would be the first thing you would do?
Form a fake telepathy act with my best mate and make millions.

When was the last time you cried because of a movie or TV show?
Time: The Kalief Browder Story
What is your biggest fear?
Wasting time.

What was the most embarrassing moment of your life?
Cant say. It was bad though.

Excluding search engines, what three website would you choose if no other websites were available?
thedailyjaws.com
YouTube
Awwwards

Do you have any movie/TV guilty pleasures?
Event Horizon


What are you looking forward to the most in the next six months?
Having planned for the following six months.

What is your most treasured possession?
I don’t care much for possessions.

What is your biggest regret?
Not learning to trust my instincts sooner.

What are you most proud of?
The relationships I have with those closest to me.

If you play video games, what was your most memorable video gaming moment?
Completing GoldenEye (N64) on 00 Agent without dying once.
What is your favourite Spielberg movie?
Jaws (No surprise there - Rob.)

Thank's Ross for the answers.  Next time we're sticking with The Daily Jaws as we will have Dean Newman answering our questions.