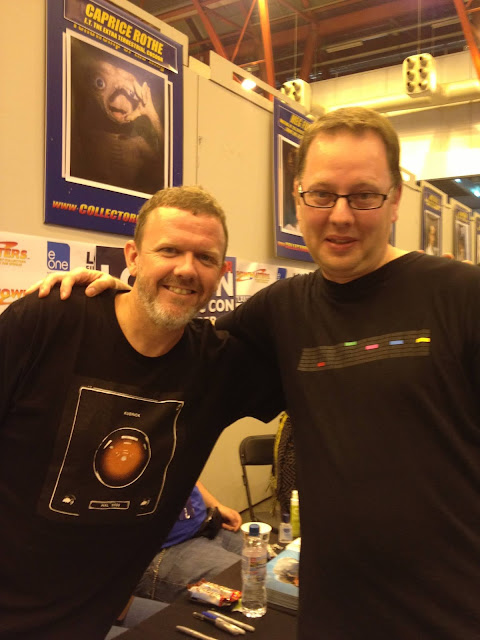 The Bearded Trio is 10 years old this year so we've become a little nostalgic and decided to post some of our favourite posts from over the years.  To kick us off we have our short interview with E.T. The Extra Terrestrial's, Robert MacNaughton (Elliott's older brother, Michael.)  He kindly answered our "quick fire questions."  This was a feature we ran regularly with questions that kind of replicated the quick fire round that James Lipton would ask his guests on "Inside The Actor's Studio."

I met Robert at London Film & Comic Con in 2013 and he kindly agreed to answer my questions.  I said to not think about them too much and tell me the first thing that comes to mind, hence the short answers.  Here we go:

You're stuck in a swamp on Dagobah. What one movie, TV show, album and book would you take?
MY movie would be The Fighter and TV show - Survivor (So I could learn to survive the swamp)

If you could invite any three people (alive or not, fictitious or not) to a dinner party, who
would they be?
David Bowie, Alfred Hitchcock and Lucy Lawless

What is your favourite John Williams soundtrack?
The Empire Strikes Back

If you were invisible for a day what would be the first thing you would do?
Put clothes on

When was the last time you cried?
Sunday

What is your biggest fear?
Being invisible for a day (Hah! - The Bearded Trio)

Excluding search engines, what three websites would you choose if no other websites were available?
Yahoo Fantasy Baseball
Coachella.com
Facebook

What are you looking forward to the most in the next six months?
Last episodes of Breaking Bad

What is your most treasured possessions?
My sled, Rosebud

What are you most proud of?
My kids

What is your favourite Spielberg movie?
Close Encounters of the Third Kind

It was a pleasure talking to Robert and is a genuinely nice guy.  I really appreciate Robert taking the time to answer our questions.

Let us know if you would like to see the return of the Quick Fire Questions feature and who would you like to see us interview?