A Look Back At Back To The Future By Douglas Meacham 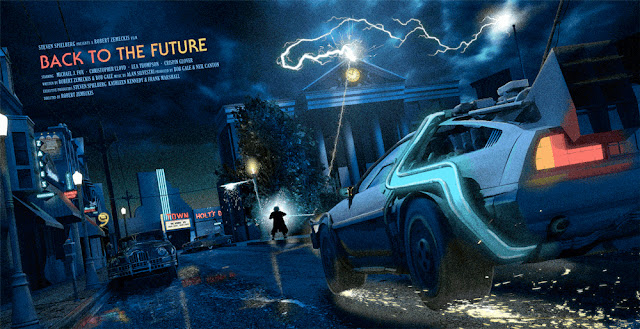 “NEXT SATURDAY NIGHT, WE’RE SENDING YOU BACK TO THE FUTURE!” - Dr. Emmett Brown

Earlier this month saw the 35th anniversary of the release of one of pop culture’s most beloved and enduring films. So much so that five years ago fans all over the world celebrated Back to the Future Day on October 21, 2015, the day Doc Brown and Marty McFly arrived in the future, albeit a somewhat different looking future. We did get some things right, but I’m still waiting for flying cars.

Bob Gale and Robert Zemeckis’s tale of a teenager who inadvertently travels back in time 30 years and meets his parents has been lauded as one of the most perfectly written scripts in cinema history, and it’s even used as an example in film schools today. Steven Spielberg liked the story so much that he brought the script to Universal Studios, where it was well received, and so the film was selected to be produced by his company Amblin Entertainment. The head of Universal at the time, Sid Sheinberg, however insisted on the title being changed to “Spaceman From Pluto”, his reasoning being that films with the word “future” in it don’t make money. He was later embarrassed by a letter from Spielberg saying the crew got a kick out of his joke.

Michael J. Fox was always the first choice to play Marty McFly, but the producer of the TV sitcom he was doing at the time, Family Ties, couldn’t afford to let him go. The second choice for the role was Eric Stoltz, whom I primarily know from THE FLY II and PULP FICTION. After over a month of shooting, it was finally realized that he wasn’t a good fit with the rest of the cast. And in the wake of his departure, a deal was struck to bring Fox onboard to shoot his scenes at night and on the weekends. He barely got sleep during the entire shoot, and felt his performance turned out terribly until he went to the London premiere. He had the privilege to sit next to Princess Diana, and has joked that he was a fake yawn and an arm stretch away from being on a date with her. Cheeky butt-head.

Christopher Lloyd initially turned down the offer to play Doc Brown because he wanted to return to his theater roots. But after remembering a nickel’s worth of free advice, “leave no stone unturned”, he took another look at the script and the rest is history. I had the pleasure of briefly meeting the iconic actor during a photo op at MegaCon in Orlando four years ago.

I’ve also had the pleasure of meeting two actresses from film, Claudia Wells and Lea Thompson. I met Claudia at a small convention in 2015 and got my picture taken with her in a Delorean. Unfortunately she wasn’t able to return to the role of Marty’s girlfriend Jennifer in the sequels due to her mother getting cancer, which is too bad because I preferred her over Elisabeth Shue. Two years ago around this time I met Marty’s mom Lea at LAX airport while she was on her way to a convention in Atlanta. She was casually waiting in line at Starbucks when I did a Marty-style double take to confirm it was her. She was kind enough to chat with me briefly and pose for a selfie.
Not enough words can be said about the performance of Tom Wilson as Biff Tannen in this film and the sequels. It’s too bad his take on the versions of the character in all the different time settings wasn’t recognized by a legitimate organization. He pretty much became the bully stereotype of the 80’s, and from what I’ve read, his portrayals are the antithesis of the actor’s true nature. 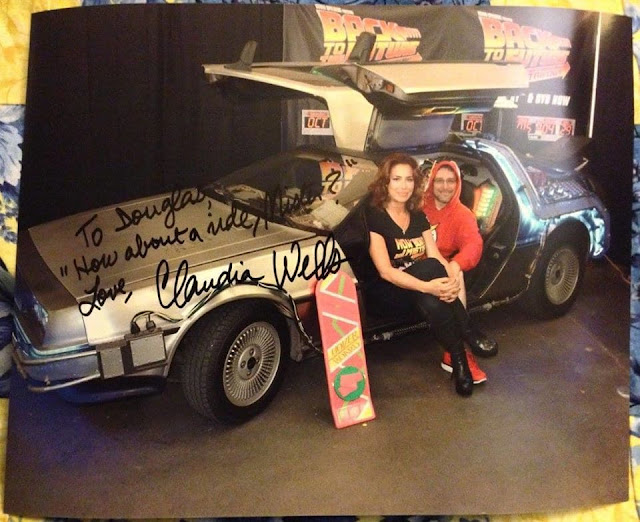 The DeLorean time machine is ranked among the most iconic cinematic vehicles of all time. People of my generation and younger most likely know of the existence of this short-lived car model only through this film franchise. I have not seen a true Delorean depicted on film except for its brief appearance in THE WEDDING SINGER, which makes sense seeing how that was an 80’s throwback film. The car was chosen because it had a futuristic spaceship look with its sleek design and hatch-like doors. Like Doc Brown said, “if you’re going to build a time machine out of a car, why not do it with some style?!”

Zemeckis was a big fan of the band Huey Lewis & The News at the time, and so he and Gale decided to bring them onto the project to record a couple of songs. As every fan knows, they turned out to be “The Power of Love” and “Back in Time”. I personally love both songs equally, in part also because my father sang them in his band shortly after they became hits.

And that leads me to the film’s orchestral music, composed by the great Alan Silvestri. He is easily among the film composers that I grew up adoring, for writing not only this score but for his work on other childhood favorites including WHO FRAMED ROGER RABBIT and FORREST GUMP, and I’m glad his work on the Avengers films has introduced him to a new generation of fans. Zemeckis wanted a classical score and not something contemporary that would have included synthesizers. Because of this decision, and under the guidance of Spielberg, his work on this film has become one of the most recognizable in film history. It’s a real shame he was not nominated for an Oscar. I had the pleasure of going to Back to the Future in Concert last year during San Diego Comic-Con, and I was blown away by it. The composer himself even appeared for a quick Q&A beforehand.

I’m glad I went back and saw all three films this week, it had been a while since I’d seen them. I feel the conservative amount of visual effects used has helped them to age well, and the writing is still very top notch. If it has been a while for you too, I encourage all you slackers to hop back into the Delorean. After all, you don’t need roads.