APOLLO 13 - A Retrospective Look Back By Douglas Meacham

On April 13, 1970, the Apollo 13 spacecraft was three days into its voyage to the Moon. Its lunar module was supposed to be the third manned spacecraft ever to land on the surface. But instead, it ended up serving as a lifeboat for three astronauts striving to stay alive after a routine procedural check of their service module goes wrong.

Twenty-five years later, a film was made to accurately portray the events of the mission that was dubbed “the successful failure.” Directed by Ron Howard, known for hits like COCOON and WILLOW, and starring America’s then leading man Tom Hanks as the spacecraft’s commander Jim Lovell, along with Kevin Bacon as command module pilot Jack Swigert and Bill Paxton as lunar module pilot Fred Haise, the team set out to make a movie that could be just as good or better than any archival footage that existed. 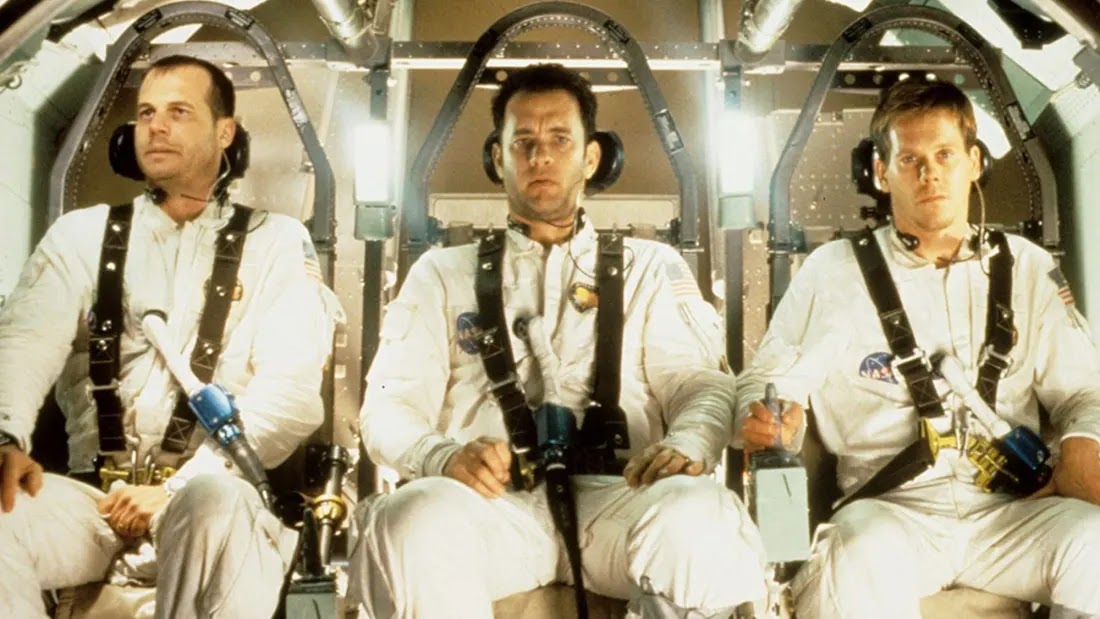 The cast and crew worked closely with real-life astronauts Jim Lovell (who cameos as the aircraft carrier captain at the end of the film) and Apollo 15 commander Dave Scott. They all attended Space Camp together where they partook in training exercises in Apollo simulators.

To achieve the effect of floating in space, a KC-135 plane was used to house the set interiors of the command and lunar modules while it flew parabolic patterns at 25,000 feet. The crew would film the actors “on set” while the plane nose dived for 25 seconds at a time, simulating weightlessness. This had to be done 612 times to film the full-body space scenes as well as some close ups. According to Kevin Bacon, Ron Howard got the idea of using the plane from fellow filmmaker Steven Spielberg.
Tom Hanks had been wanting to do a film about space for years. After this box office and critical success, he and Ron Howard went on to produce the limited TV series FROM THE EARTH TO THE MOON for HBO. Both projects got me interested in researching the moon landings as a kid.

I consider this film to be one of the few that significantly impacted my childhood, along with SUPERMAN, JAWS, and TITANIC. I of course have many childhood favorites from George Lucas, Steven Spielberg, and other great filmmakers, but I feel that these four have left a lasting imprint on me.

Facts
Douglas Meacham
Douglas is a HUGE movie fan and has a very insightful movie group on Facebook called, Meacham's Movie Madness. Douglas is also a Patreon of The Bearded Trio and a very valuable supporter of the site.