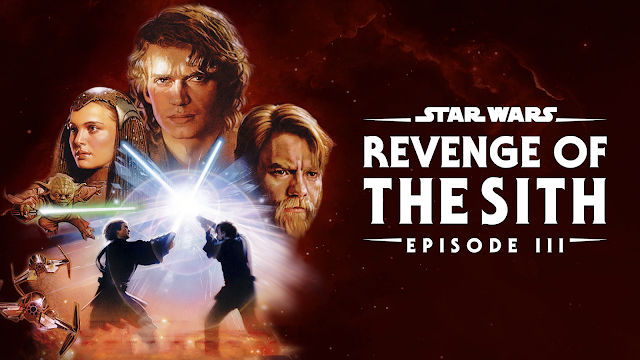 STAR WARS: REVENGE OF THE SITH


Fifteen years ago the Star Wars saga came full circle and was considered, at that time, to be complete. George Lucas had finally told the tale of Anakin Skywalker’s rise to Jedi knighthood and his subsequent fall to the dark side of the Force to become Darth Vader.

The prequel trilogy is my Star Wars, and this film is my favorite of the three. They are the films I saw in the theater as they came out like the generation before me did with the original trilogy. I hold the OT in high esteem and believe that they are the superior films, but because I didn’t experience them the way I did the prequels, I view them as very similar in quality to each other (although I do believe THE EMPIRE STRIKES BACK is the superior of the three).

Lucas’s use of the subtitle "Revenge of the Sith" is a play on the working subtitle for Star Wars: Episode VI - Return of the Jedi (1983), "Revenge of the Jedi". For episode VI, that title was abandoned because Lucas determined that revenge was not a suitable attitude for a Jedi. Since this film, however, is about the triumph of the Sith, "revenge" is entirely appropriate.

Lucas brought on his friend Steven Spielberg as a “guest director” to help design some sequences during pre-production. This was partly because Spielberg wanted the experience of using the pre-visualization techniques pioneered by Industrial Light & Magic, as he was going to use them for his upcoming film WAR OF THE WORLDS. Spielberg's main contribution was in the climactic lightsaber duel between Obi-Wan and Anakin on the volcanic planet Mustafar.

Speaking of the Mustafar duel, anyone who’s a fan of behind-the-scenes documentaries should hunt down the excellent “Within A Minute: The Making of Episode III”. It was included in the special features of the DVD release and can be found on YouTube. This documentary looks at one minute of the duel by picking apart every single aspect that goes into bringing that scene to the screen.

People have complained about how quickly Anakin seems to succumb to the dark side. But if you watch THE CLONE WARS animated series, Anakin’s character is much more fleshed out. You see the toll three years of war has had on him between episodes II and III. I recently finished my watch through of the series with the release of season seven, and seeing Order 66 carried out in the film again brought an additional emotional weight to an already heart-wrenching scene.

Speaking of Anakin’s turn, the scene in which it happens occurs almost exactly halfway through the film. It is the tipping point not just for the movie, but for the entire saga.

I cannot talk about Episode III without mentioning Ian McDiarmid’s performance as Palpatine. His portrayal throughout the prequels and in RETURN OF THE JEDI is why the Emperor is my favorite character in the Star Wars universe. He’s just one of those bad ass bad guys that you just love to hate. I know some people have issues with how his makeup looks after his face becomes deformed because it doesn’t line up exactly with how he looks in JEDI, but I just except the fact that he’s not as old here as he’s supposed to be in that film and therefore his face is less decayed. 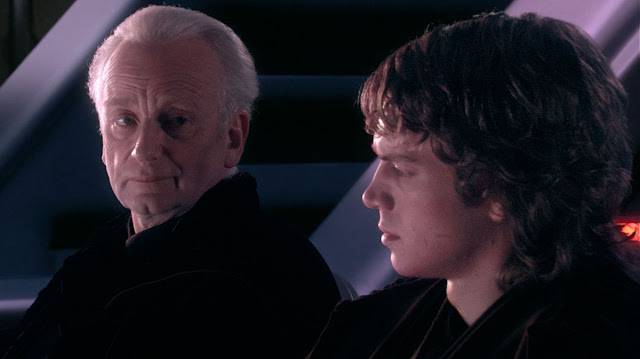 Lastly, John Williams’s score beautifully made use of previously established themes from both trilogies while introducing new ones. His stand-out theme for this film, “Battle of the Heroes”, is a hauntingly tragic piece of music that plays against Obi-Wan and Anakin’s duel on Mustafar. I also like his use of Leia’s theme on Alderaan and Luke’s theme on Tatooine as Obi-Wan delivers him to his aunt and uncle as they look out at a familiar twin sunset.