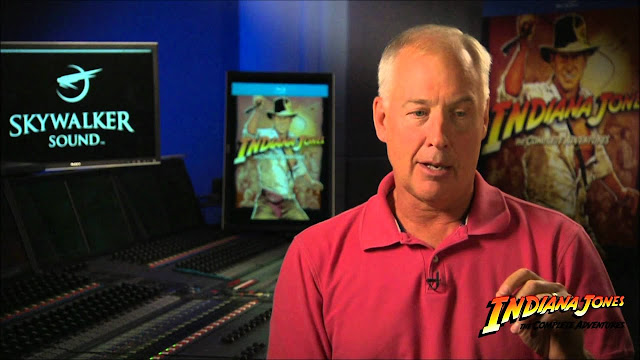 How in the world does one put the power of sound into a written form that doesn't actually sound like anything? Well, I'm not sure, but I sure am going to try to do the genius work of Ben Burtt justice here.
Here at The Bearded Trio, we are celebrating the 40th anniversary of the release of Raiders of the Lost Ark (1981), and the character of Indiana Jones. We tend to shine our spotlight, deservedly so, on three of the creatives behind one of cinema's transcendent characters - George Lucas, Steven Spielberg and John Williams.
However, on the occasion of this anniversary, we're taking a look at other figures who played just as big a part in making the 1981 film, and Indy's character as unforgettable as they are. You can check out Rob's wonderful tribute to Director of Photography Douglas Slocombe on the site today.
Ben Burtt landed his first big assignment as the sound editor of Star Wars: A New Hope (1977). He carried out George Lucas's marching orders to find earth-bound sounds and apply them to the used universe concept. R2-D2's vocals, the lightsaber, Darth Vader's breathing, the rumble of the Death Star and the laser blasts all owe their existence to the wonderfully creative ear of Ben Burtt. He became an essential part of Lucasfilm following the worldwide success of Star Wars, so when Raiders of the Lost Ark came around, he was the easy choice to be the film's supervising sound editor. 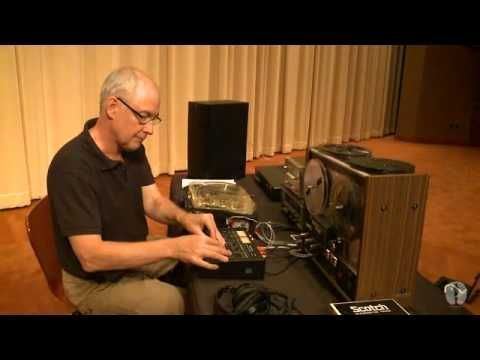 In terms of story and setting, Raiders would be a much different film than Star Wars or Star Wars: The Empire Strikes Back (1980). This time, the crew was making an earth-bound film that was a direct callback to the Saturday afternoon republic serials of the 1930s. The film was set in the 1930s and featured a hero that "never loses his hat," according to Burtt. Except of course when he did.
Burtt, who did ask if this was a film where the hero never lost his hat, smartly asked the right question in understanding what style of movie Spielberg was going for. Common sounds, like gunshots and punches had just that little bit of exaggeration to them, like they were slightly too loud and sharp, but landed perfectly in the ear of the audience. I have always felt Raiders was the film Spielberg made pointedly and specifically for an audience to enjoy first.
Raiders is a film that is, as Spielberg noted, "a great adventure in sound." From that alien-sounding bird that distracts Sapito in the Peruvian jungle in the film's opening sequence, to the ragged motors of the plane as Indy fights the German mechanic, every single sound grabs you and pulls you directly into the film.
Burtt is famous for the sources of the sounds he applies in his films as being pretty far removed from their intended application. The cover on the back of a toilet seat is the sound of the Ark's lid opening. Listen to those sounds thinking "toilet lid" and "Ark lid" separately, and the sound perfectly matches both, depending on how you're listening. But in context, in that final dramatic sequence, it only adds to the tension of the climax of the film.
His wife's cheese casserole is also an unlikely source for a wide variety of sounds. What makes sense for that kind of sound is Jabba the Hutt in Star Wars: Return of the Jedi (1983). What makes less sense, to less-trained ears, is that same casserole contributed to the sound of the snakes in the Well of the Souls. Now in the real world, snakes are nearly silent. They don't actually hiss. But down in that pit, with Indy and Marion having no means of escape, those cobras and pythons absolutely hiss. Would that scene be frightening if the snakes were silent, as they are in the real world? Maybe. But thousands of hissing snakes? I still shudder.
For his efforts, Burtt was rightly awarded an Academy Award in 1982 for Sound Effects Editing for Raiders, sharing the honor with Richard Anderson. 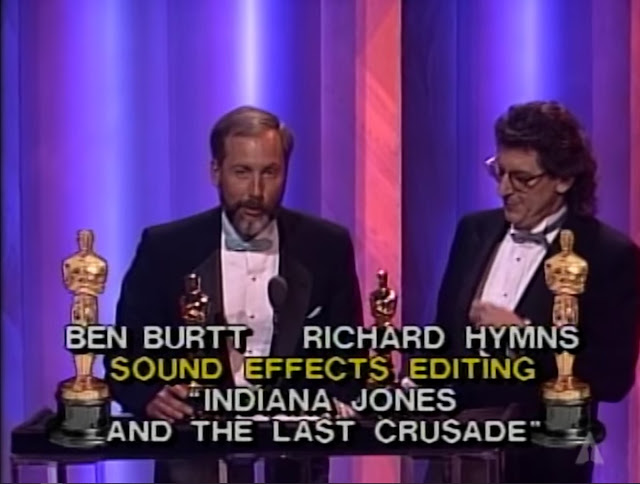 That magical run Spielberg/Lucasfilm had in the early 1980s featured Indiana Jones and the Temple of Doom (1984). The overall sound map of the sequel/prequel would not change much, and why should it? The crack of Indy's whip had become as iconic as the look of his hat and the tune of John Williams's main theme by then.
Doom would see Indy go to "hell" and return redeemed and ready to fight again, and Burtt's sound fit right into that theme.
I think a lot about how exhausted Burtt, Lucas, Dennis Muren, Phil Tippett and others at ILM had to be when Temple of Doom was in production. This group had an unprecedented run of blockbuster films from 1977-83. And yet they had to gather themselves physically and creatively for the sequel to Raiders of the Lost Ark just one year after Return of the Jedi completed the Star Wars Trilogy. With privilege comes pressure, and Burtt, like his talented coworkers, was up to the task.
Some sounds were reworked from Raiders, like in Doom's spike room sequence, a favorite of Spielberg's. Burtt used garage springs and counterweights that were originally used for the Peruvian temple sequence in the first film.
Take note also, of the failing plane engines when Indy, Willie and Shorty escape from Shanghai. The sound of those failing engines carries many of the same elements of the failing hyperdrive on the Millennium Falcon. This is just one of many examples of how I see the Star Wars and Indiana Jones films acting as cousins of one another.
In a retrospective "circle of life" moment, Burtt and re-recording mixer Gary Summers were allowed into Disneyland in California after hours to record sounds throughout the park. Standout sounds from these sessions included roller coaster sounds that applied perfectly to the mine car chase throughout the depths of the temple. Being in the park after hours allowed Burtt and Summers to record sounds without crowd noise and without background music that so often plays in the parks. Naturally, 28 years after the release of Temple of Doom, Disney bought Lucasfilm and rights to the Indiana Jones franchise along with it.

As the audience grew up with the three Indy films across eight years, so did the story grow and mature for the title character. The third entry in the series, Indiana Jones and the Last Crusade (1989) saw Indy repair and restore the relationship with his father in the latter's quest for the Holy Grail.
Burtt would win his second Academy Award in this franchise for his sound work on Last Crusade, sharing this time with Richard Hymns for Best Sound Effects Editing.
As Doom had bugs, rats would take stage as the creepy crawlies of Last Crusade. As is Burtt's custom, he looked to a very different part of the animal kingdom to get the sound of rats chirping and squealing: chickens. As is stated in JW Rinzler's definitive book on the Indiana Jones saga, Burtt says "Oddly enough I ended up using chickens. I put the sound on a keyboard and then played the highest notes. It sounded like rats to me and I guess everyone else believed it."
Cheese casserole is snakes and chickens are rats. Got it.
The standout sound to me in this film occurs in the screenshot above, when Walter Donovan shoots Professor Henry Jones in the stomach at the beginning of the film's climactic scene. That single gunshot startles the audience with its depth, starkness and volume. Burtt achieved the effect by firing a .357 Magnum inside an empty parking garage in Skywalker Ranch, just as George Lucas himself drove in to park! Presumably, Burtt did not shoot George first.
Another dramatic moment in sound in Last Crusade comes when Indy attempts to cross the invisible bridge as part of the Grail Diary's third challenge. Indy can't see the bridge. His father's health is fading quickly from Donovan's gunshot. The grail lies in wait across this bottomless chasm. Williams's breathtaking score holds on a single, soft violin note as Indy steps out into the void.
We then see, and hear simultaneously, Indy's foot hitting rock as his faith reveals the existence of this bridge, invisible due to forced perspective, but also perhaps, visible to the enlightened. 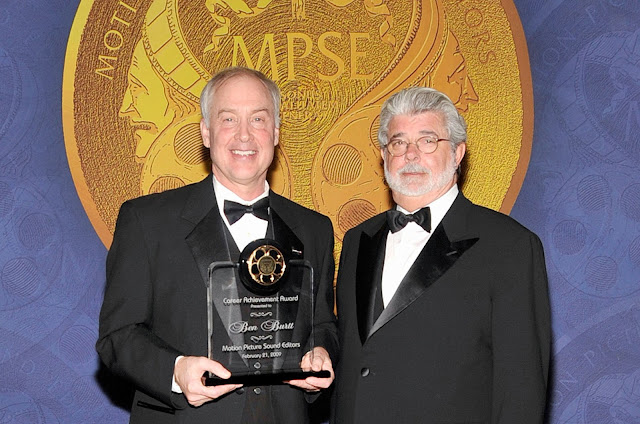 The brilliance, fun, timelessness and compact nature of the Indiana Jones movie saga has many contributors. Any list of such contributors is simply incomplete without Ben Burtt's name. He layered in a sound palate that told its own story of balancing the old with the fantastic, the gritty with the realism and just the right amount of touch of making Indiana Jones a hero, not just for one movie, but for all time.
Thank you Ben Burtt, from all of us, for your tireless work in creating the sounds of Indiana Jones. And please know that as much as your work has been studied and appreciated the past 40 years, it will live on, for many more than the next 40 years.
Brad Monastiere
I live in Michigan and have been an unconditional fan of Star Wars and Indiana Jones for decades. Follow me on twitter @bmonastiere
The Bearded Trio - The Site For Steven Spielberg, George Lucas, John Williams and a whole lot more.