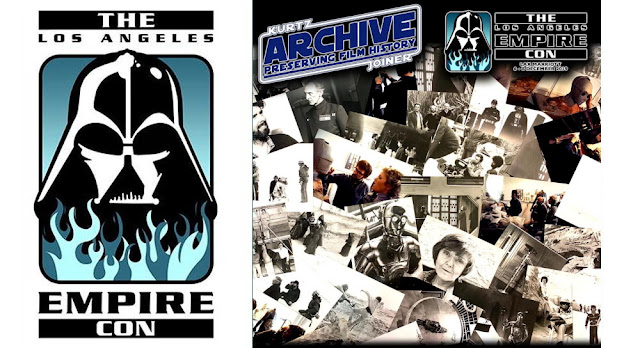 Rather than trying to explain what the “KJA” are, I thought I’d take the explanation directly from their website: www.kurtzjoinerarchive.com

The Kurtz/Joiner Archive is the collaboration of Gary Kurtz (Star Wars producer /filmmaker and vice president of Lucasfilm up until 1981) and Jason Joiner (Collector and Guinness world record holder for the largest Star Wars collection and film historian) In 1991 they met at Gary’s production offices in London to talk about Gary’s work on the Star Wars films. Jason had been interviewing crew members for the previous two years in an attempt to preserve and record as many of the crew’s memories as possible for future generations of fans. When they met, it was a genuine meeting of minds, as Gary really liked that Jason was finding out the real history from the crew that made the films. Jason was amazed by how much knowledge Gary had retained and soon realized that Gary was not a normal film producer; he was someone that gave up years of his life to live, work and breathe Star Wars for around 8 years. Gary did not just produce the films as a job; he gave over his life to creating them like one would bring up a child. Jason could tell that Star Wars had meant, and still did mean, a lot to Gary. After that meeting Gary helped Jason with his project to interview as many cast members as he could, which in the end totaled over 350 crew members.

One day Jason was talking to Gary about a 4-Lom mask that he had bought, and Gary talked about all the items he had kept from the past. It came up that there was a large storage room full of paperwork, photos, drawings and props. In fact, a lot of Gary’s life had been stored in boxes, never opened since the day they made it to that storage room. As Jason had been gathering items, just as Gary described, for the past 7 years, this collection was of great interest to him and so he asked to visit the storage room. Gary agreed and Jason went to the US to take a look. Upon arrival it was soon apparent that Jason had a difficult task ahead of him; the storage room was crammed from ceiling to floor with storage boxes, all brimming full of paperwork from Gary’s films. This was a whole new and exciting world for Jason, for in that one room there was more information about the films than he had learnt in over 3 years of meeting people.

Jason came back to the UK and talked to Gary at length about what to do with all of his material; it would need to be catalogued and looked after if it were to be preserved. It would also be amazing for Jason to have the opportunity to go through the paperwork to put it into order. Everything would need to be scanned and transferred to other formats so that there were back-ups of this unique and un-seen history. Jason knew it would be a big job that would take many years to complete, but he felt it was something he had to do. Gary saw that Jason cared as much as he did about the history of the films and felt that Jason was the person to look after, and be responsible for, this material. It was at this time that Gary and Jason came up with the idea of creating an archive to preserve and collect material relating to Gary’s films. And so Gary’s collection was added to Jason’s collection and the Kurtz/Joiner Archive was born.

KJA At Empire Con 2019
The room they used at the convention was the size of a small conference room, but it was wall-to-wall pictures and also some displays of props, costume pieces, etc... Most of these I believe very few members of the public had never seen before. The best part was that each day of the three-day convention the pictures would change, so you could go in there each day and see something new and different. The sad part is that the taking of pictures and video by the public were not allowed in there, and they even had someone stationed in the room to make sure that that rule was followed. So unfortunately, I have no images to share with this story. Someone from the “KJA” was in the room as well to answer questions, and I asked if they planned to publish these in a book or series of books as there were just so many and was told; “No plans for a book at this time.” It was truly a magnificent and wonderful display, and I highly recommend that anyone who considers themselves to be a Star Wars fan take the time AND make the time to see this collection if the opportunity arises.

As of writing this, the con is still scheduled to go on Dec 11-13th of this year, again at the LAX Airport Marriott. The “KJA” is listed on the website, and they even have a few guest announcements. However, they have not updated their social media posts since January, so who knows if it will still happen or not. Considering it is just over 90 days away, one would think some sort of announcement would be made as to “yay” or “nay”, but I have no control over that. So, we’ll just have to wait and see. I did buy my Gold Pass again, but I did that before the pandemic hit and as such have not reserved a room or investigated flights yet as I feel this will end up going the way of most conventions in 2020, but only time, and the status of COVID will tell. If you would like further information regarding the show, you may visit their website which is: www.Empireconla.com

Dan Dudych
You can read Dan's look back at Empire Con 2019 here.