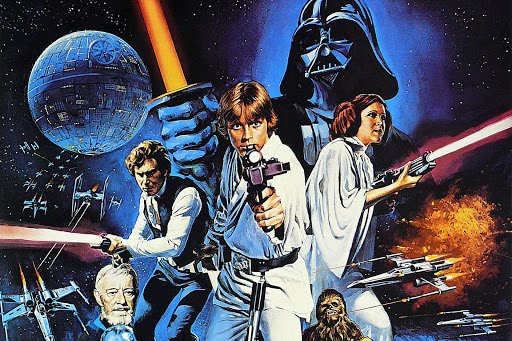 Each weekday this month, I’ll screen a film from The Bearded Trio Cinematic Universe and list 10 random scenes, characters, musical cues or performances that I particularly enjoy and look forward to upon every viewing. I’d love to hear similar little things you enjoy about these films, and hope you join me in this escape from the present-day world.

Next up is a film maybe one or two of you might have seen at some point over the past 42 years, Star Wars: A New Hope (1977)

A New Hope - An Introduction
I was a few months past my 4th birthday when Star Wars hit my suburban Detroit cinema. Like so many of my generation, I have vivid memories of that screening, and many subsequent screenings over the next couple of years. I recall being SO MAD that Darth Vader got away. He was the bad guy, he killed Obi-Wan Kenobi, he should die so the good guys can really win. That’s how my 4-year-old brain processed it at the time. If only someone could let me know that Darth Vader living would end up being a good thing.

While A New Hope isn’t my favorite in the series, it is an absolute work of genius, far ahead of its time. George Lucas created a masterpiece that emotionally resonated with audiences worldwide in a way, I would argue, like no piece of popular culture has since then.

We all know the key moments, lines and musical cues from this classic. Here are a few of mine.

1. So many characters have been so compellingly presented, it has begged the question “what is that person’s story?” This rebel soldier was the first on-screen character to prompt that question for me. For some reason, he made a strong impression. The grim determination, the resolve, perhaps the inevitability of his fate, which would be realized just a few frames later. This actor’s brief performance, conveyed for the audience which side it should be on.

2. Has there ever been a study or explanation of Darth Vader’s robes? Seen in this film, as well as Rogue One (2016), parts of the robe drape over his shoulder armor. In Empire Strikes Back (1980) and Return of the Jedi (1983), they fold under the armor. I realize I’m not pointing out something that is a shock to people, but I would love to hear a rationale for the change.

3. Some of my entries in this blog are written with the benefit of hindsight with additional films. This dinner scene is so key when taken in that context. Phil Brown conveys so much of Uncle Owen’s character in just a few words and glances like this one. Deeply skeptical, just short of openly hostile. But his final line in this scene: “That’s what I’m afraid of” shows there is a caring human under the gruff exterior. Luke’s aspirations extend well beyond the farm. Obi-Wan and Luke’s father are linked. Uncle Owen claims he needs Luke on the farm, but we learn he really wants to protect him. Just a brilliantly written, acted and directed scene.

4. This is my favorite musical moment in the film, and also is one that today, consistently puts a smile on my face. First of all, welcome back Obi-Wan Kenobi! For those who consume the Saga in story order (1-9), this is such a reassuring scene. The Obi-Wan we grew to love in the Prequels, who had endured so much, is still here. Nineteen years later. Quite a bit older, but still with that distinct twinkle in his eye. It’s comforting to know that this steady Jedi Master has survived this long to see Anakin’s son begin to come of age.
And John Williams’s music cue in this scene. It is magic. Quiet, understated, and a low but full rendition of the Force Theme, so perfect for this character in this reveal. The music plays under the dialogue, but is still commanding. A delicate balance, worked out so well in post-production. This is all set against the grit of Tatooine, so well represented by John Barry’s production design and Ben Burtt’s sound design. It’s a perfect scene, and leads my favorite portion of the film, which goes from this scene to the one in Obi-Wan’s home.

5. If it’s not apparent by now, I’ll come out and say it - Obi-Wan Kenobi is my favorite Star Wars character. I wrote about him here back when the Disney + Obi-Wan show was announced last August. As much as I adore what Ewan McGregor and James Arnold Taylor have done with the character, we all met him through Sir Alec Guiness. An enormously respected and acclaimed actor well before Star Wars, Sir Alec dressed the character with the combination of wisdom, patience, understated power and knowledge. Since we, the audience, projected so much of ourselves onto Luke, and as Luke looked up to Obi-Wan, so we too looked up to Obi-Wan. In subsequent scenes, which include Han Solo, you always got the sense that Obi-Wan knew just a little more than those around him. Even after his death on the Death Star, Obi-Wan’s presence loomed large throughout the rest of the film. Star Wars isn’t Star Wars without Sir Alec Guiness and his portrayal of Obi-Wan.

6. This was a popular bit during the release of Rogue One. The empty chair at this conference table absolutely belonged to Director Krennic. I will absolutely die on that hill!

7. During the Original Trilogy era, this was my favorite scene. Chewbacca and Luke and Han, in stormtrooper disguise, blast their way through this Death Star control room in an effort to free Princess Leia. I got the biggest kick out of the bad guys (in appearance) blasting other bad guys in order to rescue the princess. By this point the stormtroopers were well established as bad guys, so to see them “turning good” got an internal cheer from me every time.

8. A word here for Harrison Ford, who I plan to lobby Rob to be an honorary honored member of this website (hey he had a beard for a little while in The Fugitive!) In both A New Hope and Empire Strikes Back, he is performing his character better than anyone else could possibly hope to. When we meet him in this film, Han is world weary, cynical and fails miserably at hiding the huge heart he truly possesses. His conversation with the Imperial official, pictured here, is Ford at his improvisational best. George did an admirable job at creating a character that was an ideal foil to Luke, a foil that had to be a comfort zone for both actors, because there was no ambiguity about the sandbox they could run around in within the context of their respective characters. I’ll admit, I grew to like Han’s character more upon the release of Solo: A Star Wars Story (2018) but the character shines in a fun and unique way in this film.

9. This is an historic shot. It was the first shot produced by Industrial Light & Magic approved by George Lucas. An underrated aspect of the production of this film is the gestation of ILM as a special effects entity. Making Star Wars had to be challenging enough on its own, but George had to create ILM from literal dust at the same time. It certainly wasn’t an easy task. John Dykstra was a brilliantly talented artist, but had well-known clashes with George, and left ILM in the year after A New Hope’s release. The effects, as consumed by a 1977 audience, were jaw-dropping, and despite their aging, have achieved a long-lasting respect from fans worldwide.

10. All is well. The good guys won. The Death Star is destroyed. Medals were bestowed upon Luke and Han. The rebellion was celebrating. But there was one last thing that was missing for a time in this throne room scene. What happened to R2-D2? He was badly damaged during the Battle of Yavin. What a great touch by George, to show two shots of Artoo happily beeping and rocking back and forth in happiness, celebrating with Luke and his friends while also showing he was shiny, new and repaired. It was a touch that only a genius would have thought of, and still makes me well up in tears seeing those two shots to this day.

Brad’s Escapism Moment in A New Hope
The final shot of the film. A spirited argument could be made about which film has the more feel-good ending - A New Hope, Return of the Jedi or Indiana Jones and the Last Crusade. This shot represents the end of a wild ride of a journey billions of people around the world have taken time and time again over the past 42 years. I saw A New Hope 13 times in the theater when I was a kid. I went with friends. Parents. Grandparents. And all separately. It was important to me to share this experience with those I loved most as many times as possible. It wasn’t until 1988, when the film was broadcast on CBS around Thanksgiving, when I was able to record it on VHS and could enjoy the film in my home anytime I wanted. And look what has come from this film. Endless toys, comics, novels, games and so many other things that have enriched my life in countless ways. Star Wars got better after 1977 in my opinion, but I have the deepest love and respect for the 2 hour, 4 minute experience that got it all started.