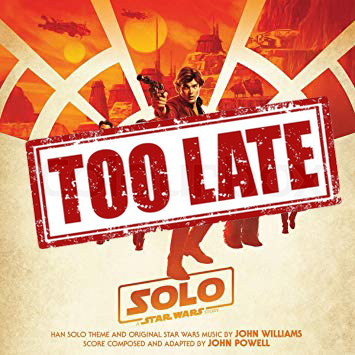 Solo: A Star Wars Story will not be represented in the 'Best Original Score' category at the Oscars due to Disney/Lucasfilm missing the deadline.  Oops!

According to Variety, the score from John Powell with themes by John Williams  was struck off the list of nominees after it failed to submit the score by the 15th November.  They say that misery likes company so they can feel slightly better in knowing that another three other movies will not be represented due to the same reason, Green Book, Mandy, and The Other Side of the Wind.

First-round voting is underway for the Oscars and over 150 scores are in the mix.  Solo: A Star Wars Story, unfortunately isn't one of them.  Lets hope they get that Grammy that they've been nominated for.

Voting ends at 5 p.m. Pacific time on Tuesday, Dec. 11. Shortlists will be announced by the Academy on Dec. 17.