Life size speeder bike will have you in End-awe 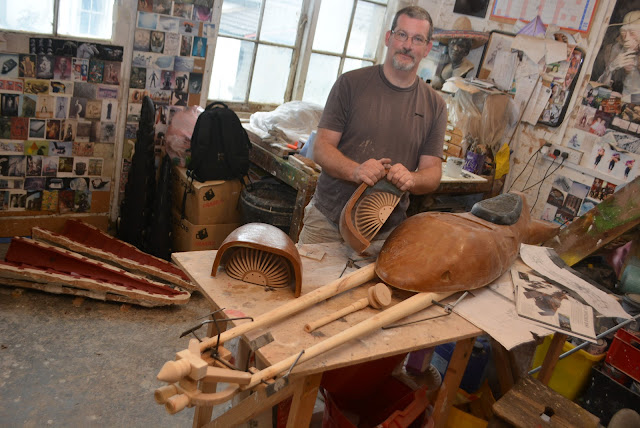 Ever wanted to build a life size speeder bike? Of course you have, Designer Dave Taylor been itching to build one since he first saw one appear on the big screen when he was aged nine. And now he has.

Dean Newman boards Shuttle Tydirium, don’t worry he has an older code clearance but it checks out, and catches up with then man who has brought the speeder bike to life.

You may remember Dave from last year, if not him then certainly his life-size X-wing fighter that ‘crashed’ into a shopping centre in Southend, Essex. 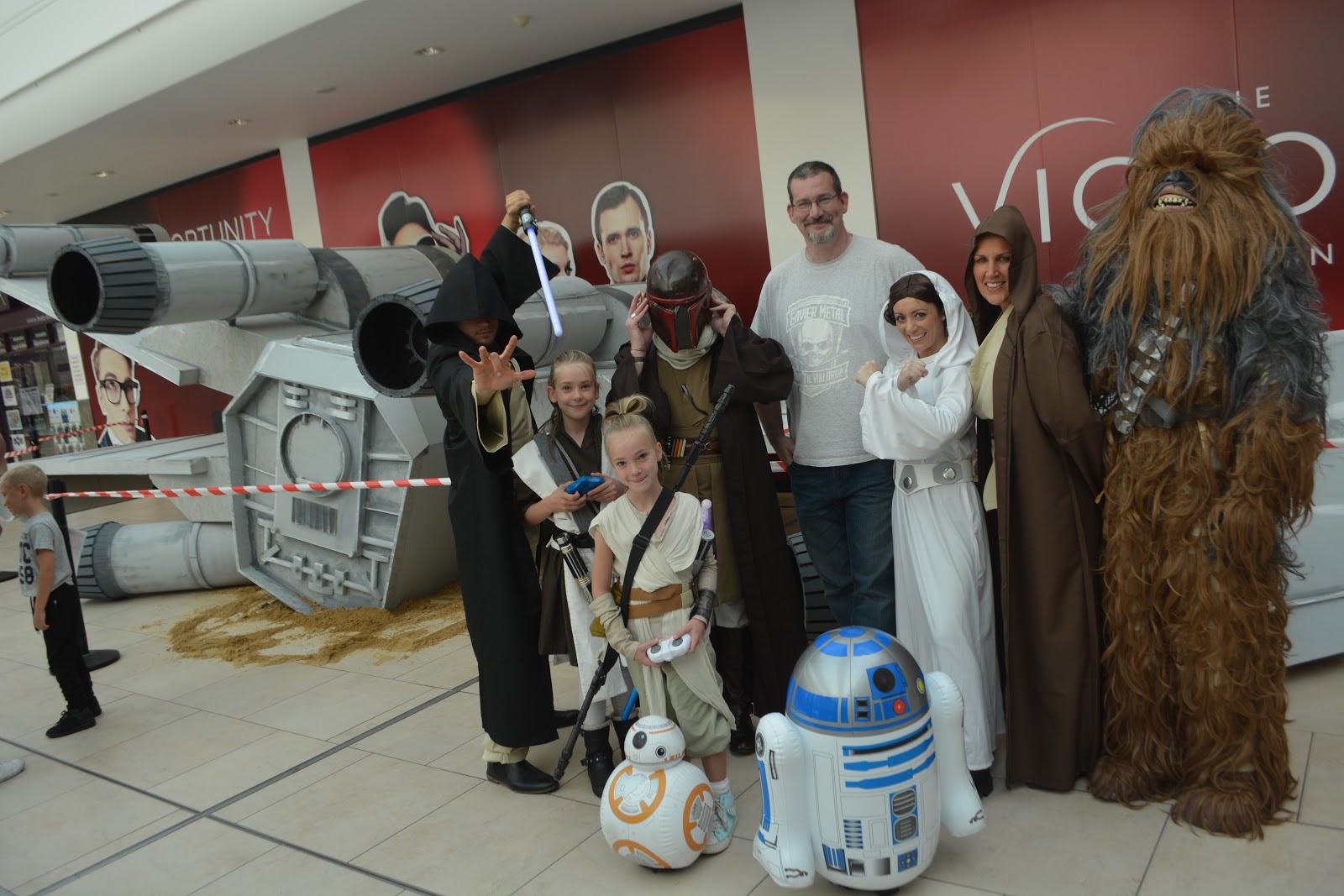 His speeder bike may be smaller in size, but it’s no less impressive and this time…you can sit on it. It won’t whizz through trees at great speed or have active laser cannons – but you can sit on it and pretend it does, coming complete with a backdrop of the forest of Endor rushing by. 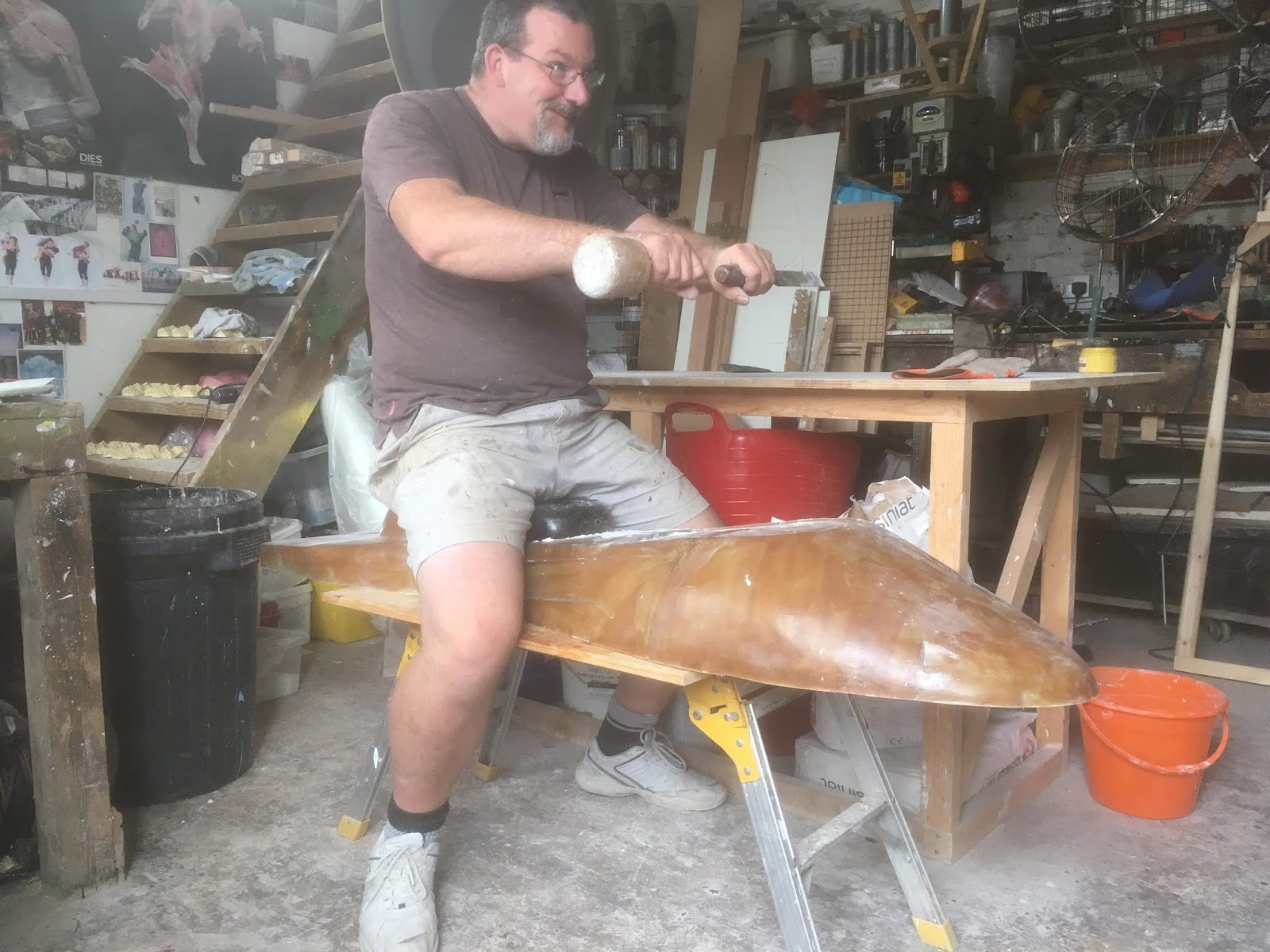 And there will also be Luke and Leia’s rather dubious camouflage attire to complete the illusion. Industrial Light and Magic the background it is not, but for a Southend-on-Sea shopping centre in Essex on a blustery Saturday at the end of September, it is something pretty special.

Return of the Jedi, celebrating its 35th anniversary this year, was first unleashed on screens in 1983 and it still has a special place in the heart of Dave, as it was the first Star Wars film he saw on the big screen – in Thurrock, Essex no less. In fact it was the same cinema as used in Roger Rabbit – soon to be a Wetherspoons pub (please let them call it The Roger Rabbit).

Little did the then nine year old know that he’d be bringing one of the film’s highlights to life, the spirit of that awe-inspired child comes to the fore as we speak to Dave about his latest creation.
His workshop looks like a film set, even the almost vertical stairs have that filmic appeal to them like something from Harry Potter. Unwisely I’ve dubbed them The Exorcist stairs and now fear tumbling down them each time I visit for a construction update.

The main fuselage of the almost complete speeder bike was initially constructed out of clay and then cast out of fibreglass, the same with the engine housings, and the rest is exposed mechanical parts that includes everything from steel tube to MDF, metal and even old bits of bikes. It’s  HOW LONG in length and dominates the room, that looks like a cross between Caractacus Potts’ workshop in Chitty Chitty Bang Bang (and although one of his daughter’s is involved in musical theatre I’m pleased to say Dave resists the urge to break into song like Dick Van Dyke) and rather fittingly where Luke Skywalker tinkers with R2D2 and C3P0 in Star Wars. All that’s missing is an outlandish contraption to make a cooked breakfast and an oil bath for 3P0 in the corner. 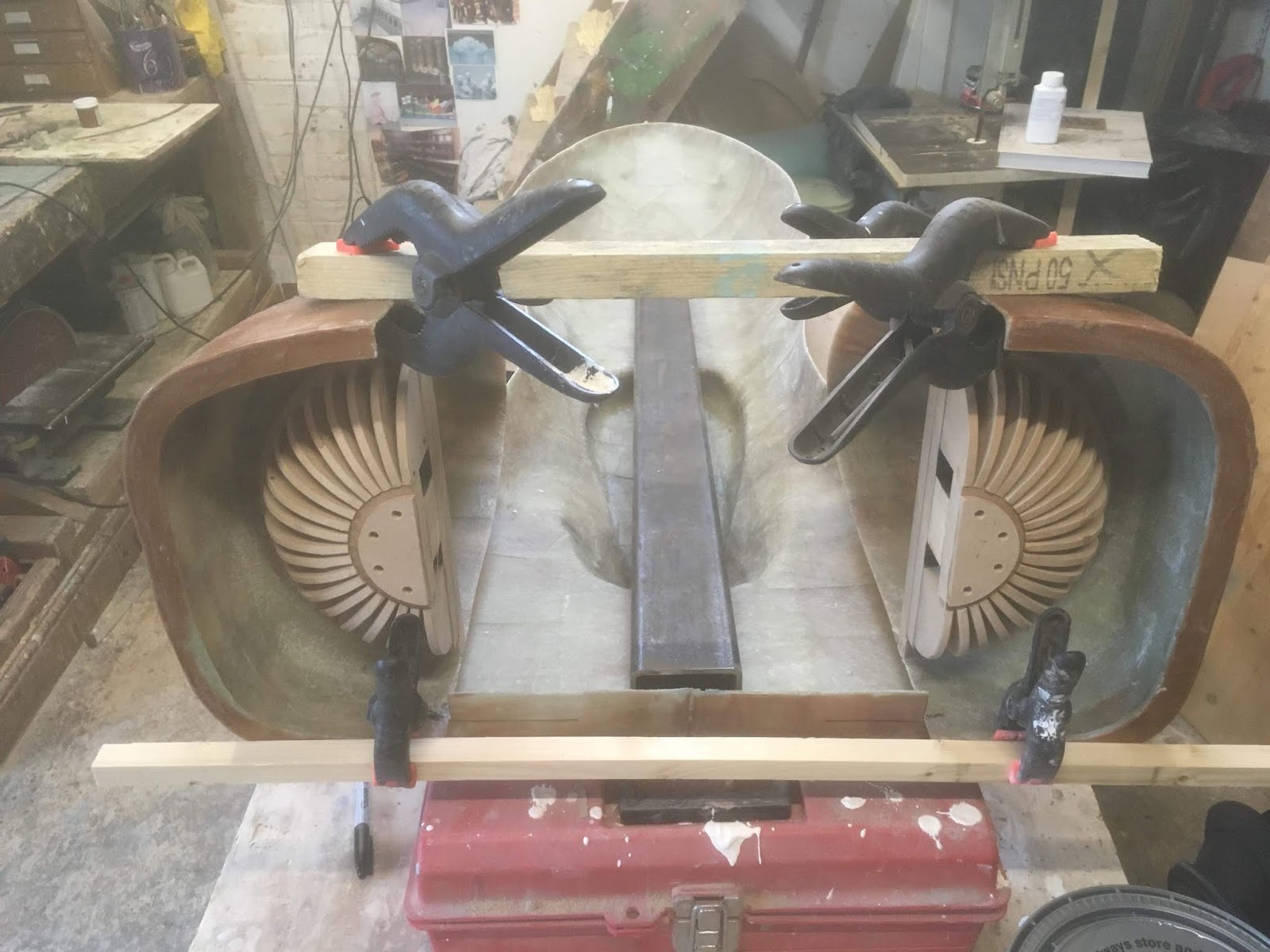 DN: Why a speeder bike?
DT: It’s 35 years since the release of Jedi and I still remember queuing up at the State Cinema in Grays to watch it, I was right near the front of the screen and the excitement was unbelievable. I was nine and I’d already been collecting the figures for the film for a while, I just didn’t know if some of them were goodies or baddies. So, that’s why I wanted to focus on something from that particular film.

Unfortunately there wasn’t the budget to make a life size Scout walker, that would have been fantastic. Although I did briefly consider just building the feet and the legs of it. I’d also contemplated a life size Jabba the Hutt, that would have been good fun, but the clincher for the speeder bike was really that people would get to sit on it and interact in ways that they couldn’t with the X-wing fighter last year.

DN: Were you wowed by the speeder bikes when you first saw them?
DT: God, yeah – vroooooooooooom! Who doesn’t want a speeder bike, and the toy was fantastic that blew up at the press of a button. I’ve still got it in the loft; I should really dig it out. I didn’t though as they are scaled to match the figures so the actual scale is really off.

DN: Plus you wouldn’t want to create an exploding button on the back of your one. I’m guessing the legs of the dining room table and chairs stood in for the forest of Endor?
DT: (Laughs) Absolutely. The figures were stiff-limbed back then so sat really awkwardly on the model as well, but none of that mattered. I just loved it. The sequence in the film was just really exciting and was a great sequence.

DN: The X-wing was a mammoth undertaking ­ - check out the time lapse of it being constructed last year below – what was easier about the speeder bike this year?
DT: It’s not absolutely immense and the thruster engines of the X-wing alone were four feet across and were quite big and heavy to handle. It took a team of five of us to assemble it and paint it. This time it is a lot more manageable and easier in its physicality.

DN: What challenges does the speeder bike bring?
DT:  When people say making big things is so difficult, I don’t think it is. It is because they are heavy and all that, but when you look at a big object you take a step back from it. When something is small people lean in to look closer, so the smaller something is the intricate and the more detailed it is expected to be.

The X-wing was terribly inaccurate in many ways, but it all hung together because it was this big thing, with this people will be getting closer to sit on it and inspecting it more closely. So this year in many ways the little details have to be far more accurate. 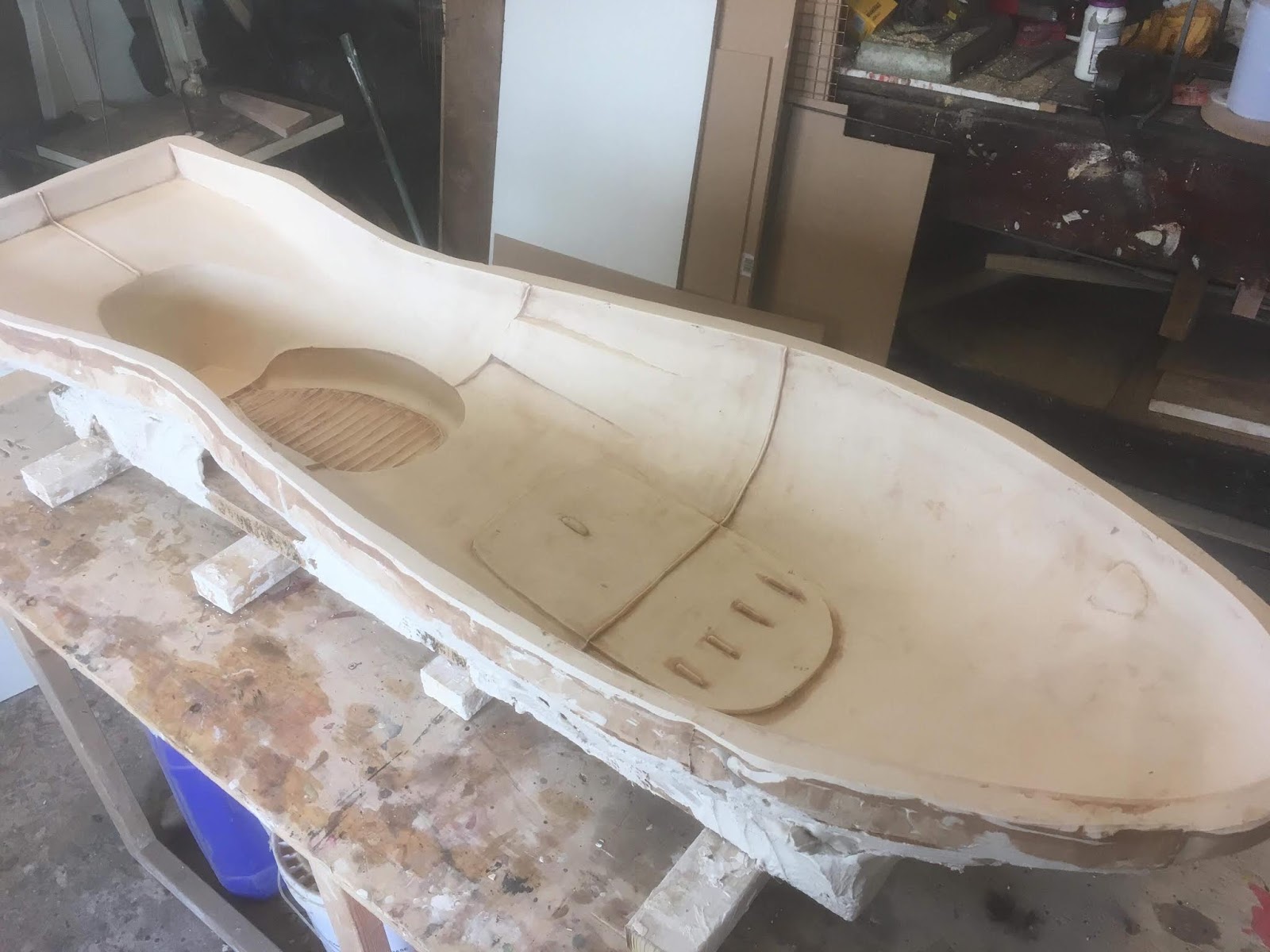 DN: With people sitting on it does that mean it has to be far more robust than just a model you look at?
DT: Definitely, I’ve already got some big sections of steel that I’m going to be using to support things. It’s just about trying to make those as unobtrusive as possible for photos as we can’t green screen them out. 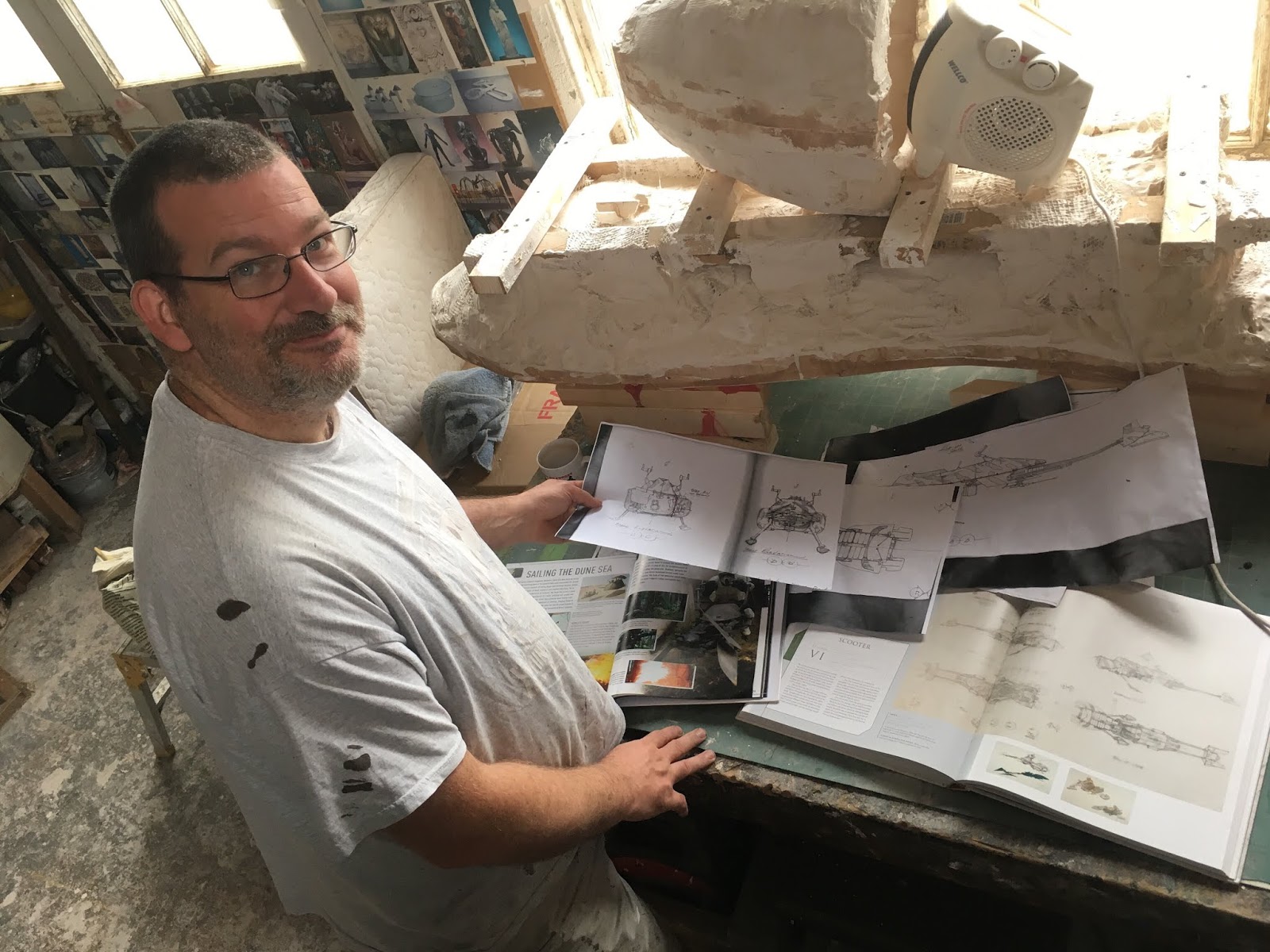 DN: What are using for reference?
DT: As you know it doesn’t stay still for very long in the film as it is zipping about a lot, my two principal sources of reference are Star Wars: The Blue Prints – which is fantastic as you have original scaled diagrams that the prop makers worked from – and Star Wars: The Complete Vehicles which features some great cutaways of vehicles from numerous angles.

DN: Where’s the Haynes manual when you need it?
DT: I do have the Death Star one, but I don’t think I’ll be building that anytime soon.

DN: With an X-wing fighter and speeder bike under your belt, what’s next up Dave’s large Jedi-like sleeves?
DT: Seeing as I’ve done what’s now referred to as A New Hope and Return of the Jedi I’d love to complete my Star Wars build trilogy with something from The Empire Strikes Back, something like a snow speeder or the giant foot of an AT-AT would be amazing. Or even a Tauntaun for people to sit on. 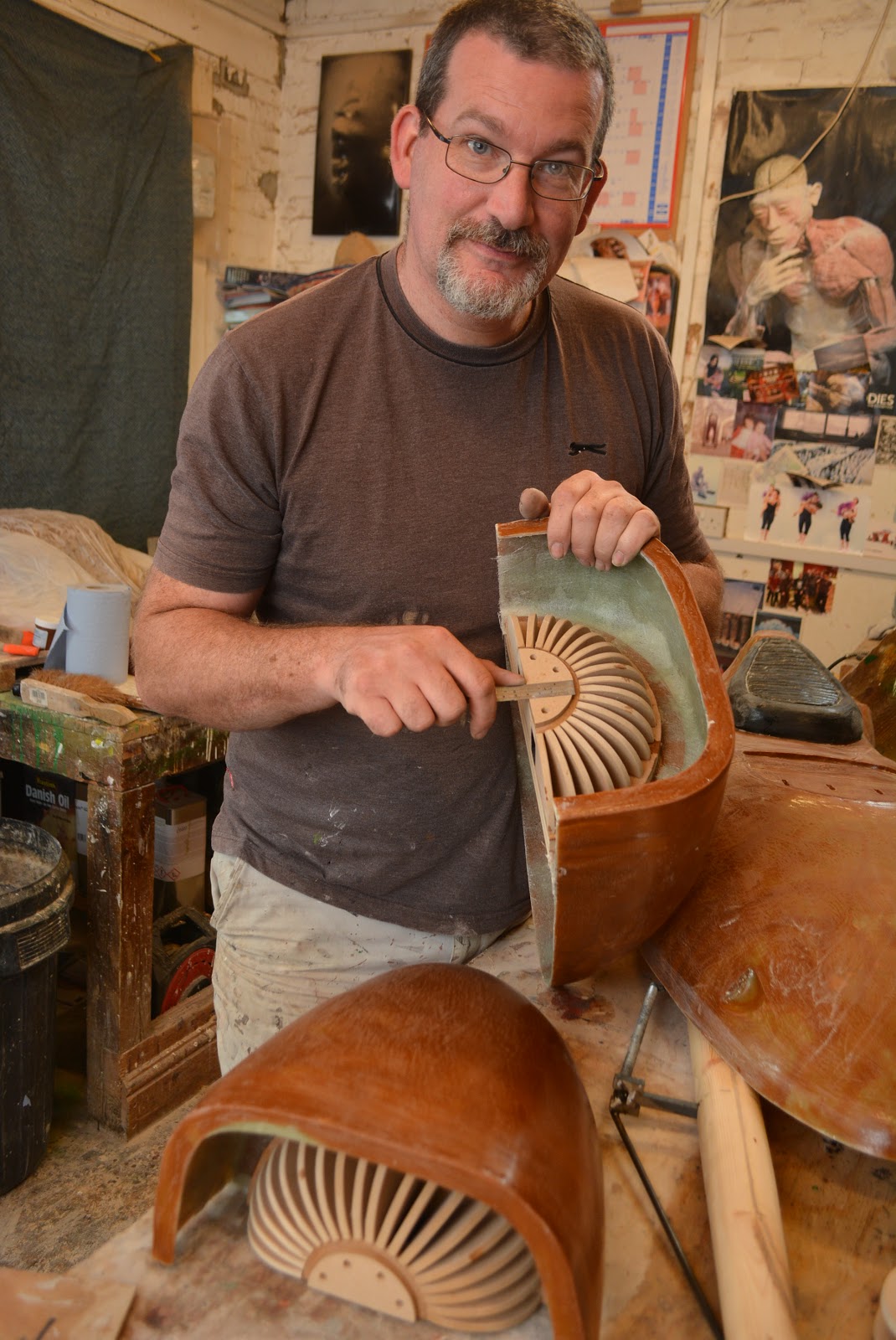 I guess we’ll just have to wait and see what Dave strikes back with next year…
Catch the speeder bike – if you can – on Saturday 29 October at The Victoria Shopping Centre in Southend-on-Sea, Essex, between 12pm – 4pm.

Dean Newman is Chief Writer at The Daily Jaws, writes his own film blog, Admit One, and previously wrote for Syfy. He’s always been a huge film and Spielberg fan, keen soundtrack and movie poster collector and is a budding script writer.
http://thedailyjaws.com/blog/ 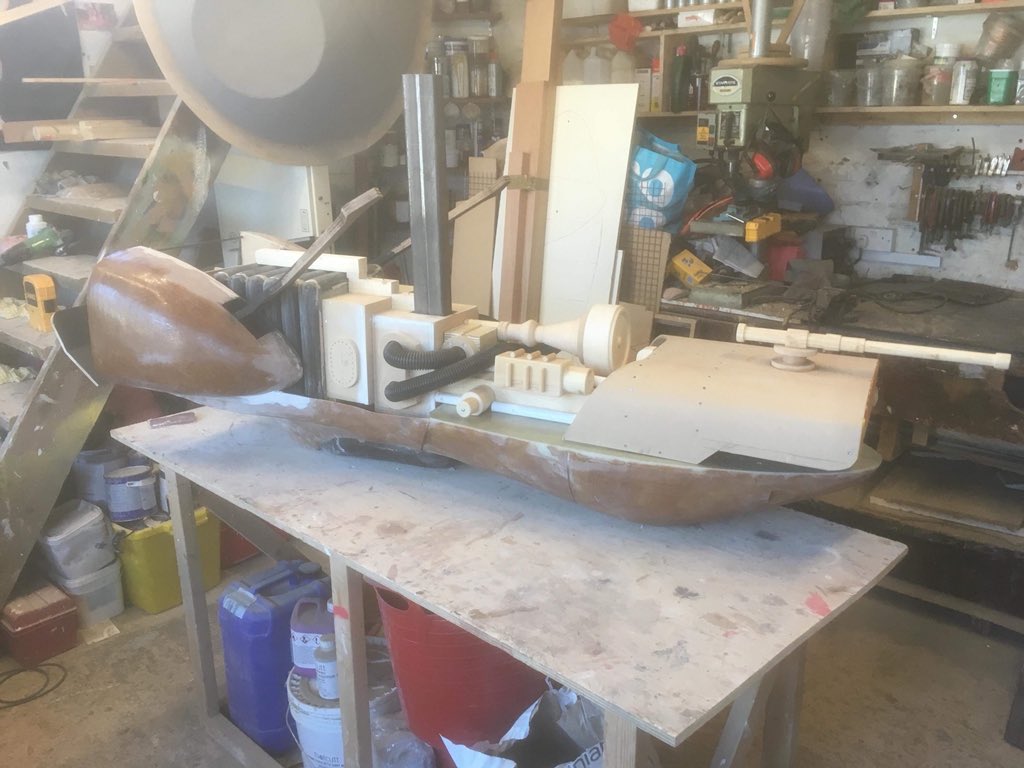 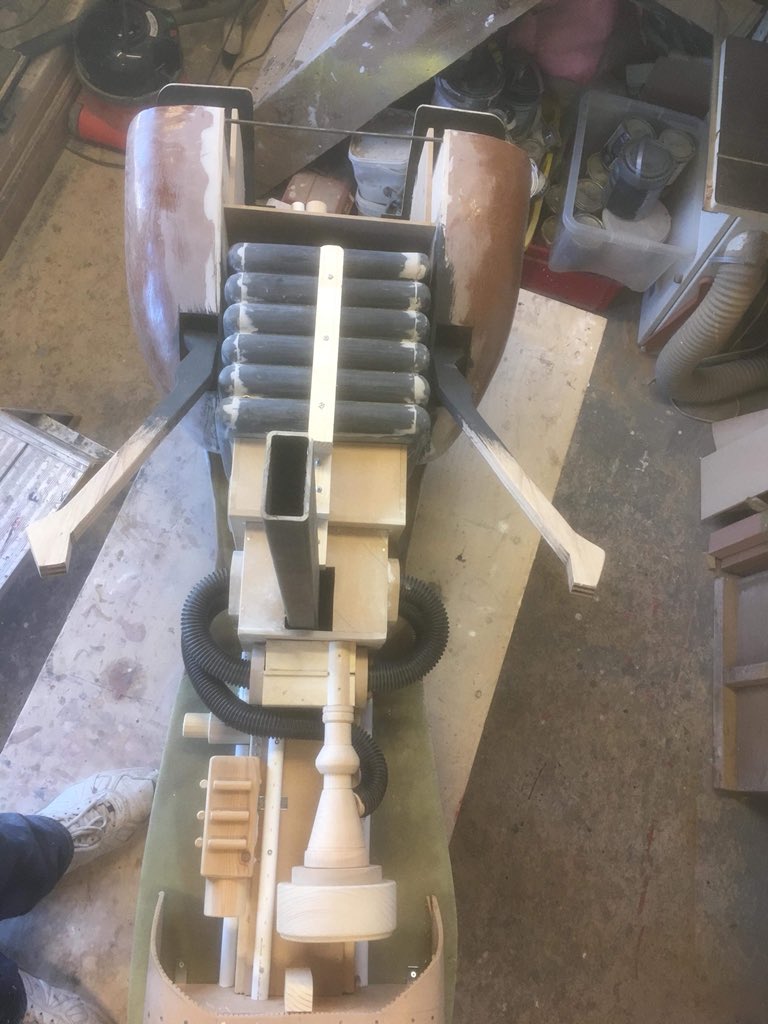 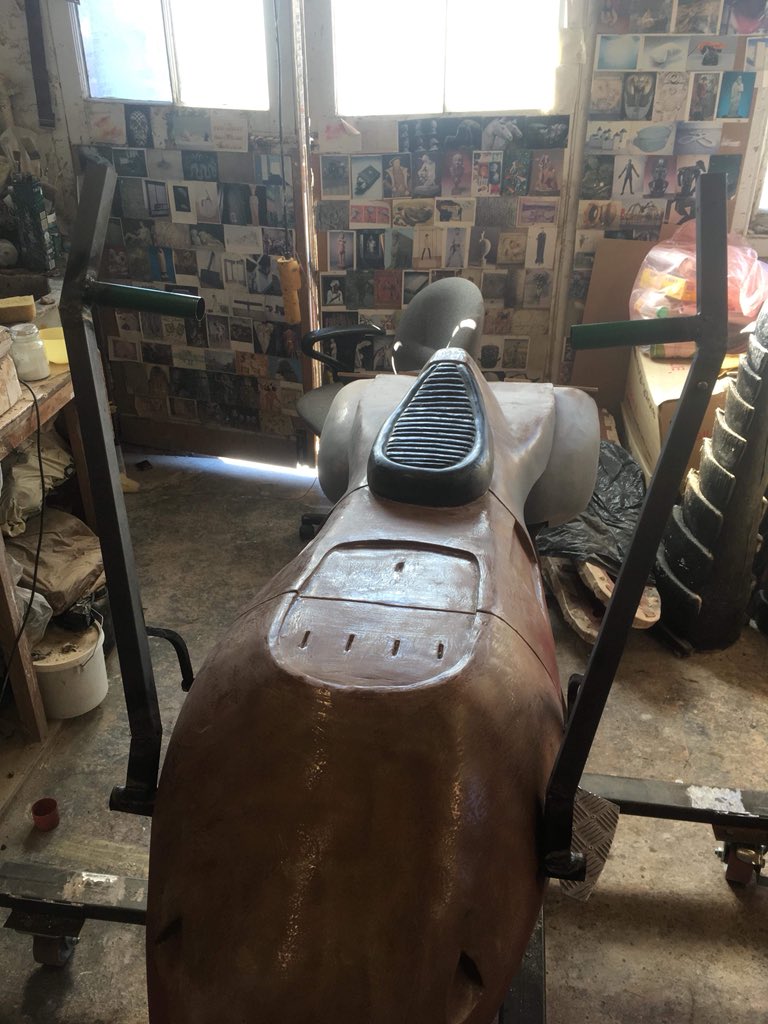 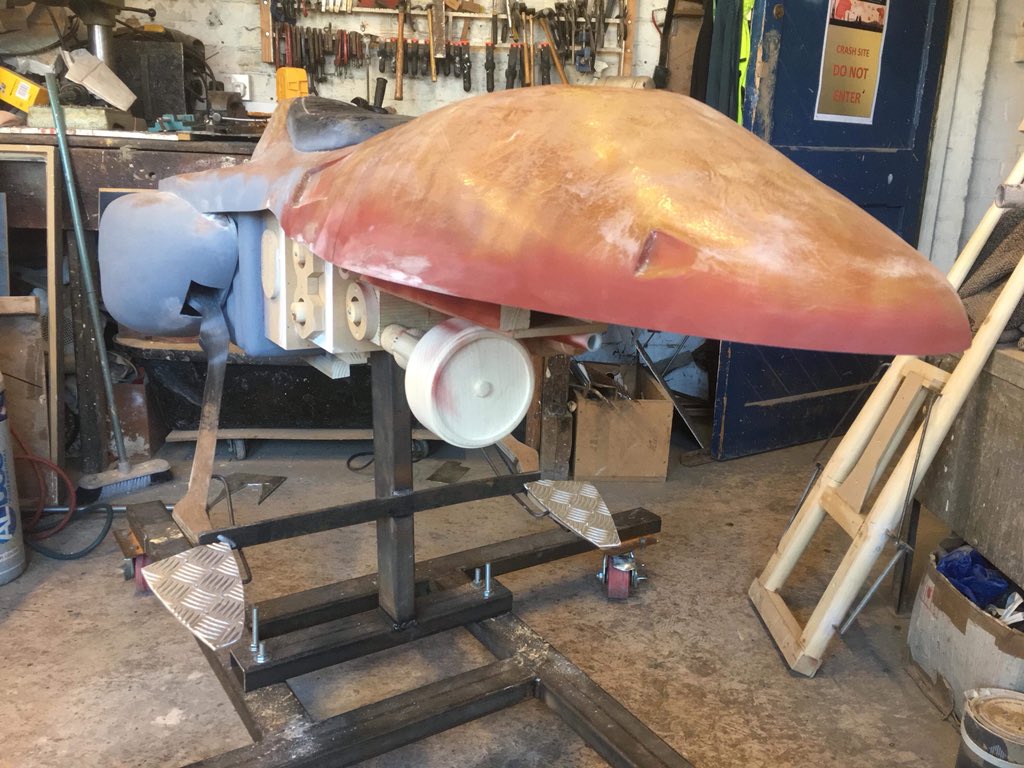 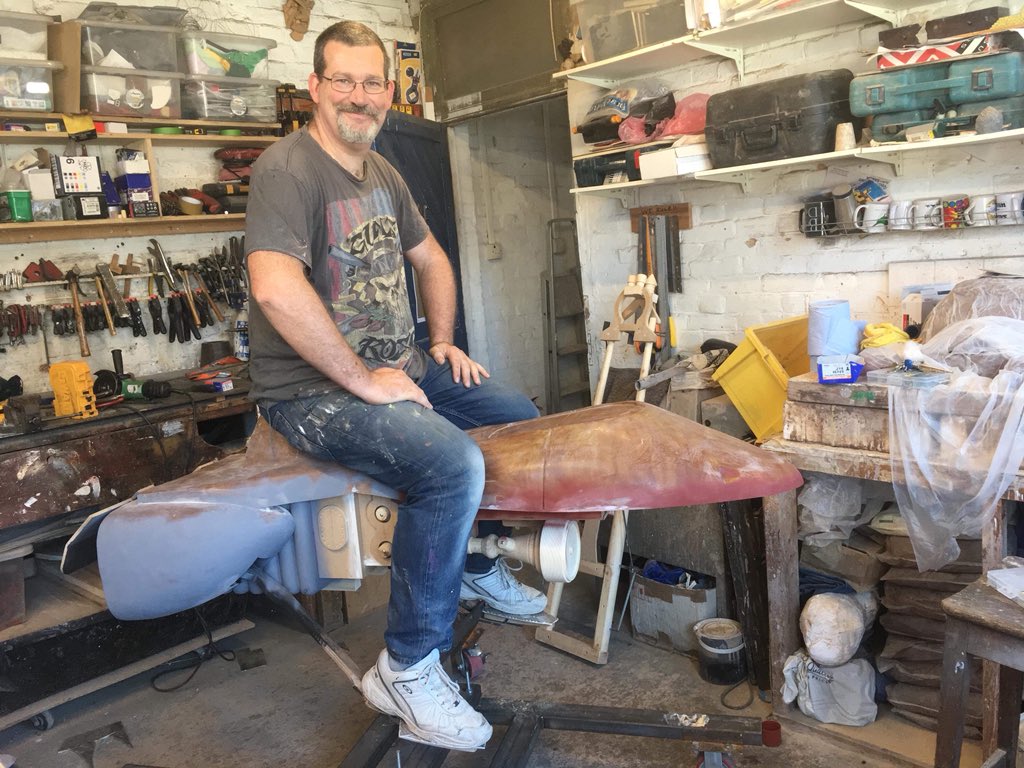 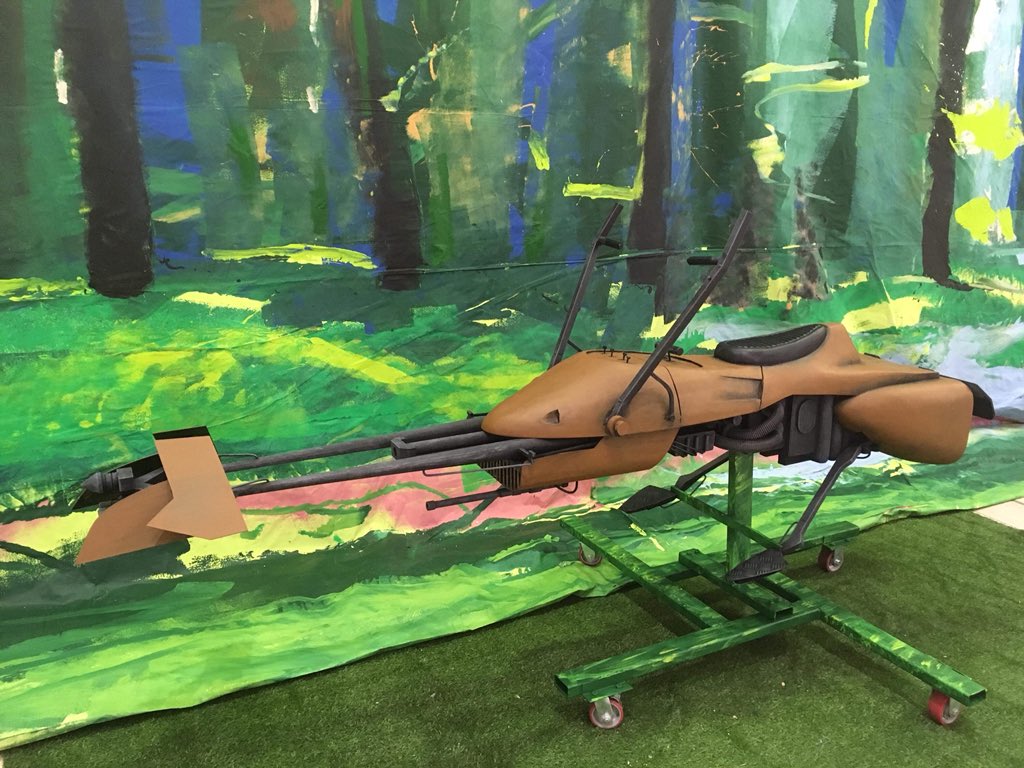