On an X-Wing and a prayer: Building a ¾ size X-Wing fighter 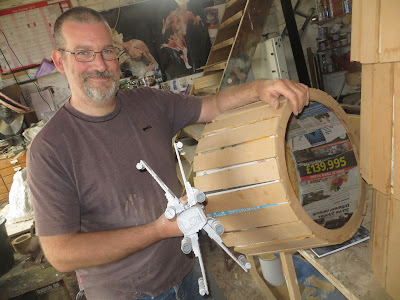 Last year you may remember a giant AT-AT appearing in a back garden, well this year a ¾ size X-Wing fighter is set to ‘crash land’ in an Essex shopping centre.

The design force is with Dave Taylor from Westcliff-on-Sea who is recreating the iconic Star Wars spaceship 40 years  after its first appearance in the original Star Wars (I know, Episode IV: A New Hope, but to people of a certain age it’s still just plain old Star Wars).

And he’s creating it one bit at a time and the constructing it like a huge 3D jigsaw the day before it is unveiled on Saturday 30 September at the Victoria Shopping Centre in Southend-on-Sea.

Southend is no stranger to Sci-Fi, its famous for featuring in the opening chapter of The Hitchhiker’s Guide to the Galaxy, a pier which Luke Skywalker himself (Mark Hamill) paid a visit to a few weeks back as part of Jamie Oliver’s latest TV show.

Dave’s creation, complete with awesome 30 foot wing span, is even more astounding as he’s creating in a small workshop.

Dave is a huge Star Wars fan and like most of us he has spaceships and figures in the loft, being well-played with like most of us they are also minus boxes and the cards they came on. He said: “I’ve still got my vehicles and bigger items such as Jabba’s Palace, an X-Wing fighter and the Millennium Falcon. Alas, figures wise I’d bagged figures up in one bag and guns and capes in another. When my mum and dad moved only the figures bag came with them.”

He flogged the figures to a toy shop as the owner had a box of guns he could match them up with; it was probably Dave’s original bag of guns!

One of the fondest memories of Dave growing up was him standing for hours in line to watch Return of the Jedi (1983) at the State cinema in Grays – famous to film fans worldwide as the cinema that Roger Rabbit and Bob Hoskins sit in – fourth row from the front, which practically made him feel as if he was dangling in that sarlacc pit or swinging through the trees with the Ewoks. And Southend just so happens to be home to Ewok Medicine Man, Logray, aka actor Mike Edmonds. 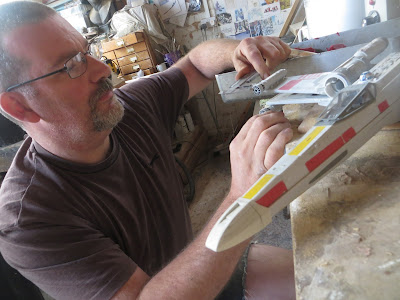 With the recent visit of a genuine Jedi Master to Southend, the 40th anniversary of the release of Star Wars and the year of the release of The Last Jedi, there really isn’t a better excuse to build a giant X-Wing fighter.

I was lucky enough to pay a visit to Dave’s workshop to find out not just how construction was going but how you end up with the gig of creating one of cinema’s most iconic spaceships.

Excitement followed by a huge grin. That’s what’s been greeting Dave when he’s told people what he is building. And I think he’s in part building it for his 8 year old self that went to see Return of the Jedi. But how do you approach such an ambitious project?

Head on appears to be the answer, Dave’s done some diagrams of it in situ at the shopping centre but admits much of the plans are in his head, shame he isn’t an R2 unit that can just project them then.

And he freely admits that it is possibly the most ambitious project he has ever taken on. He said: “I don’t often tackle single pieces this large. I’ve made large sets but a single prop or sculpture this size.”

Size clearly matters with this intergalactic installation but Dave can often be found working on much smaller projects in the Warhammer universe.
He added: “I think that is one of my strengths as an artist, I can go from something very tiny to very large and it doesn’t faze me. In fact they both present very different challenges.

“Small is easier, you  look very closely at it but on a very large object you stand back to look at it and all the little things you are concerned about kind of disappear, it’s all about the bigger picture when you are stood 10 feet away from it. I like switching from one to the other.”
Of course many of those people standing back and looking at Dave’s huge project will be Star Wars fans, so they will be sure to be looking for attention to detail.
This may be the first thing he has worked on from the Star Wars universe but he’s had experience of another huge franchise, Lord of the Rings, creating intricate 3D maps of Middle Earth and sculptures of masks, orcs and goblins. Both have huge fan bases, appeal to huge age ranges and the fans are huge sticklers for detail. As a fan himself, he is confident he can deliver the necessary wow factor.
That’s a 30 foot wing span wow factor, of course. Not bad going for a three week build from scratch in a 15 foot by 15 foot studio. That’s no Jedi mind trick I played on you there, I did say creating an X-Wing in a 15 foot by 15 foot studio.

No need for levitating it the finished ship like Luke did in the swamps of the Dagobah system in Empire though as it is going to be built one bit at a time, like a giant jigsaw meets Art Attack!

Dave said: “I’m confident in meeting people’s expectations; it’s still going to be pretty big. The engine intakes are just a smallish part of the component engine and they are still 3 feet across and 12 feet long and there four of them. The client wanted something big, to make a big impact. A Star Wars statement and that is what I think people will get.”

To make that section he cut semi-circles from Orientated Strand Board (OSB), over which hardboard was glued and nailed to get a half-cylinder. The intake sections were then fixed to these.

He added: “Making the X-Wing is simply a matter of breaking the form down into a series of geometric shapes which can then be assembled.”

Dave trained as a fine art sculptor at university, heading to art school in Loughborough and wanting to work in film. When he was 17 he actually rang up Jim Henson’s Creature Workshop as a young student.

He said: “I just picked up the phone. I basically said I wanted to work for them when I was older, what do I do? At the time thought I was going to have to go and do a model making but they said a lot of people they work with are trained sculptors, so I went and did a degree in that on the basis of my phonecall to the Jim Henson Creature Workshop. That was my decision making process for my entire future.”

If you can’t take advice from the people that created Yoda then who can you take advice off?

After teaching degree students for several year he’s now quite literally carving, mould making, vesting, wood working and welding out a niche for himself as a self-employed prop maker.

And in a film world that’s gone from model making to CGI and back to physical sets, The Force Awakens being a case in point, Dave is pleased to see a return to the old school.

He said: “There’s always a place for the physical, when a human being has to interact with something there is nothing like a physical effect.”

But what about his very own physical effect, what’s going to happen to that post event? It’s got to be able to be broken down, so it can go anywhere so is relatively easy to transport. This time though Dave won’t be putting the guns in a separate bag.

Next time: we see how Dave’s ¾ size X-Wing fighter is taking shape

Dean Newman is Chief Writer at The Daily Jaws, writes his own film blog, Admit One, and previously wrote for Syfy. He’s always been a huge film and Spielberg fan, keen soundtrack and movie poster collector and is a budding script writer.
http://thedailyjaws.com/blog/