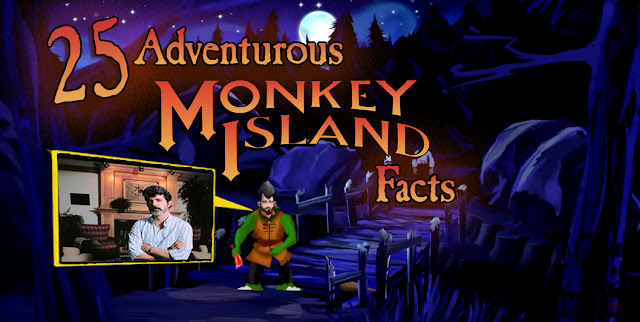 The Monkey Island games have a place in gaming history.  They are some of the finest examples of how a game should be.  Packed with fun throughout, genuinely funny with laugh out loud moments, likable characters and a well written script.  I haven't even mentioned the game mechanics that make it easy to play with no penalties for being a casual player.  You could say Monkey Island is a perfect game series.  Lucasfilm Games and Lucasarts were full of so much talent.  In fact the first game was created as a collaborative effort among Ron Gilbert, Tim Schafer and Dave Grossman, a whole load of talent right there.

The Monkey Island games have brought some amazing gaming memories over the decades.  Being Lucasarts, the games had plenty of references to other Lucasfilm projects including Star Wars.

Here's 25 interesting facts on the Monkey Island games including a whole bunch of Star Wars references.
1. Who remembers Deluxe Paint?  Well that’s what the designers used to create the sprite of Guybrush and other characters. Steve Purcell, the artist responsible for the sprite named the file for Guybrush as simply ‘Guy’ as he didn’t have a name this time.  He also added the word ‘brush’ to the filename to indicate that it was Guybrush’s sprite in Deluxe Paint.  So he had a filename of ’guybrush.bbm.’  The name was created purely by accident. A true eureka moment.


2. What about Guybrush’s last name, Threepwood?  Where did that come from?  Well Lucasarts held a company competition to come up with a good name and the winner suggested it comes from a short story ‘Blanding Castle’ by author, P.G. Wodehouse.  The main character in that story is the Honourable Galahad "Gally" Threepwood.

3. Guybrush has a middle name too.  It’s Ulysses.

4. We all love Murray, the frightening and at the same time lovable talking skull.  But he was set to have a very limited role in the Monkey Island series.  What changed?  Test players loved him so much that the makers decided to give him a bigger part and subsequently future appearances.

5. Bill Tiller came up with the inspiration for Murray after purchasing a toy talking skull at Disney World.

6. In the Secret of Monkey Island, Guybrush has to cross a bridge and with all good fantasy games the bridge is guarded by a troll.  At one point the troll takes off his mask to reveal the hideous face underneath.  It’s none other than George Lucas.


7. This next one is one of my favourites.  During the forest maze in The Secret of Monkey Island, Guybrush finds an old tree stump.  When you look at the stump the game prompts you to ‘insert disk 22.’  There was no disk 22, it was a joke but that didn’t stop hundreds of gamers at the time phoning the game help line number to complain that a disk was missing.  Sadly the ‘stump joke’ is missing from the remastered 2009 version.  Perhaps they were worried of getting complaints via social media.


8. What has Ender’s Games got to do with Monkey Island?  Well, you know the sword insult fighting game in The Secret of Monkey Island?  Well they were conceived by the author of Ender Game, Orson Scott Card.  His kids apparently helped him come up with some of the insults.

9. Monkey Island 2: LeChuck's Revenge was the first game released under the name Lucasarts. Before that it was Lucasfilm Games.


10. Guybrush asks Wally B. Feed, "Aren't you a little short for a pirate?

12. In the Secret of Monkey Island, Guybrush is caught saying "It looks... familiar, somehow. As if I've seen it in a dream... Or maybe it's... I don't know." In The Empire Strikes Back, Luke lands on Dagobah with R2-D2 and says, "It's like something from a dream. Well, I don't know."

13. Again with Guybrush who says "I can barely see out of that mask." When placing a mask made out of Tofu on his face.

14. Guybrush can upgrade the Sea Cucumber's cannon to the Destructomatic T-47

15. In one scene a character shouts at Guybrush “We don’t serve your kind here!” which of course we all know is reference to the bar keeper on Tatooine.


16. When heading to Skull Island Guybrush tells the Lost Welshman he’s not afraid.  His reply is a reference to Yoda, "You will be, you will be."

17. When talking to a cabana boy one of the references when trying to get past without an ID card is "You don't need to see my identification."

18. Looking at a Fort on Plunder Island, Guybrush says "Funny, the damage doesn't look as bad from out here.”  A classic C3PO line.

19. Guybrush finds the model of a "ACME Prosthetic Proboscis" model to be TK-421

20. On Lucre Island, when travelling through the Mist O' Tyme swamp, in one of the backgrounds is Luke Skywalker's X-Wing.

21. At the end of Monkey Island 2 LeChuck is confronted by Guybrush.  LeChuck says to our hero "I am your brother" Guybrush says "No! No, that's not true!" to which LeChuck replies, "Search your feelings, you KNOW it to be true!"


22. Popular character Wally is kidnapped to which the voodoo lady says "I felt a sudden disturbance in the Force...as if a tiny voice shouted out and then went silent".

23. In the end cut scene at the carnival Chucky's shirt has "DARTH" written on it.

24. Han’s famous line “I have a bad feeling about this” is often quoted throughout the series.

25. IN 2010, the Star Wars/Monkey Island connection came full circle.  Lucasarts used a Star Wars game to make reference to Monkey Island.  The Force Unleashed Two had an option to unlock a Guybrush Threepwood skin for your character.  So instead of fighting as a Starkiller clone, you could take on Darth Vader as a mighty pirate.  A nice touch.


Still hungry for more facts? Try some of these...
35 facts on E.T. The Extra Terrestrial
10 Facts on Steven Spielberg's The Terminal
25 Incredible Facts On Raiders of the Lost Ark
30 Jaws Facts