25 Incredible Facts About Raiders Of The Lost Ark 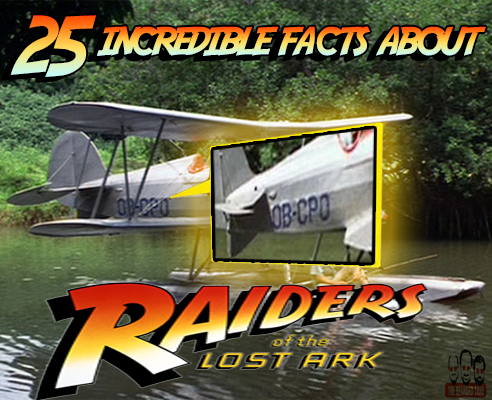 25 Facts About Raiders of the Lost Ark

Raiders of the Lost Ark was released way back in 1981 and after 39 years it’s still a fan favourite.  We just can’t seem to get enough of the man in the hat and even though Indy V is still a few years away that’s not going to stop us putting together a list of interesting facts about Raiders and hopefully some of the facts you’ve not come across before.

2. BUDGET
The production budget was around $18 million.  "I'm more than your producer, I'm your friend.  You can't go over budget on this one.  You can't do that to me" is what George Lucas said to Steven Spielberg when they teamed up for Raiders of the Lost Ark.  Spielberg took that statement seriously.

3. BOX OFFICE
Raiders took $248 million at the domestic (US) box office.  It was the most successful movie of 1981.  On Golden Pond was its nearest rival taking $119 million and Superman II on $108 million.  Superman II was released in December 1980 so those numbers do not include the movie's first few weeks.

4. ACADEMY AWARDS
Raiders of the Lost Ark did well at the Academy Awards.  It was  nominated for nine Oscars, five of which turned out to be winners.  The movie won an Oscar for, Best Art Direction-Set Decoration, Best Sound, Best Film Editing, Best Effects, Visual Effects and Special Achievement Award for Sound Effects Editing.  It was nominated for Best Picture, Best Director, Best Cinematography and Best Music, Original Score.

Movie Trivia
5. USE OF A FEMALE SPIDER
A female tarantula was added to Satipo's back to make all the other spiders crawl around.  Before the female was added the spiders just sat there.

6. ALFRED MOLINA'S SCREEN DEBUT
Speaking of Satipo, this was the actor's screen debut.  Imagine that for a start to a career?  Alfred Molina's first job was to be covered in tarantulas.  How was he ever going to beat that?


7. THE SOUND OF THE BOULDER WAS A HONDA CIVIC
You have to love the genius that is sound designer, Ben Burtt.  You know that ominous rumble of the boulder barreling towards Indy?  Well that sound is a Honda Civic driving slowly over gravel.


8. THAT BOULDER WAS REALLY HEAVY
That boulder that chased Indy obviously wasn't a real boulder but it still weighed a whopping 800 pounds or 362 kilos.  I would be running too.


9. THE WACO PLANE HAS A STAR WARS REFERENCE
The plane Indy is running to at the beginning of the movie is a Waco UBF-2.  The plane's callsign is OB-CPO.  A little nod to Star Wars.  OB being Obi-Wan and of course CPO for C3PO.

10. ILM's DENNIS MUREN IS IN RAIDERS OF THE LOST ARK
Legendary visual effects artist, Dennis Muren can be seen in the movie.  He's the Nazi spy keeping an eye on Indy as he boards the plane.  You see Muren's shifty eyes over the magazine he's reading.

11. A CUT UP HOSE WAS USED AS SNAKES
"We need more snakes!"  The crew bought up every snake from the surrounding pet stores in London but even this wasn't enough for the Well of Souls set.  To get around this the clever behind the scenes gurus cut up some hose pipes and used that as our slithery friends.  Legless lizards were also used.

12. FINGERS IN A CHEESE CASSEROLE
Ben Burtt again.  The sound of the snakes slowly slithering around was actually the sound of someone putting their fingers in a cheese casserole.

13. THE WELL OF SOULS USED THE SAME STAGE AS THE SHINING
The Well of Souls set at Elstree Studios was the same studio that Stanley Kubrick used for the Overlook Hotel in The Shining.

14. THE SALUTING MONKEY WAS REACHING FOR GRAPES
That Nazi saluting monkey we all love was actually quite uncooperative and the eventual take you see was actually the little rascal reaching for grapes.  The idea of the monkey saluting was actually thought up by George Lucas and it turned out to be one of Steven Spielberg's favourite scenes.

15. WHO AUDITIONED FOR INDIANA JONES?
Harrison Ford IS Indiana Jones, there's no getting away from that.  If you are a fan of Indy then you probably already know that Tom Selleck was a smidgen away from being the man in the hat.  When CBS decided to pick up Magnum, Tom was taken away from being an archaeologist and destined to become a private investigator.  What you may not know was that there were a number of other actors considered for the role including Steve Martin, Bill Murray, Nick Nolte, Tim Matheson, Nick Mancuso, Chevy Chase, Jeff Bridges, Jack Nicholson, and Peter Coyote.


16. DANNY DEVITO WAS ALMOST SALLAH
Just as Ford is Indy, John Rhys-Davies is most definitely Sallah.  However he wasn't the first choice.  Danny DeVito was the first choice to play the character and he dropped out after scheduling conflicts with the TV sit-com, Taxi.


18. THE BANTU WIND WAS FROM 1955
The Bantu Wind, the weather beaten cargo ship Indy, Marion, and the Ark of the Covenant hitch a ride on in Raiders Of The Lost Ark, was originally a coal carrying vessel built in 1955.  Find out more about The Bantu Wind.


19. THE FLY IN MOUTH SCENE
During the scene where Indy threatens to blow up the Ark with a rocket launcher, you can see a fly land on Paul Freeman's face and crawl into his mouth.  Did he eat the fly?  We've written a whole separate article on this very subject.

21. THE EXPLODING HEAD ALMOST GAVE RAIDERS AN R RATING
The head exploding scene near the end of the movie almost gave the movie an R rating.  Adding a fire effect in front of the head explosion somehow satisfied the ratings boffins. 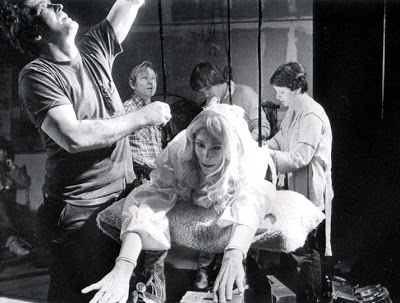 22. A LUCASFILM RECEPTIONIST WAS THE GHOST
The floating ghost that appears from the Ark at the end of the movie was a receptionist at Lucasfilm.  They painted her blue and white and had her sit on a flat trapeze in front of a blue screen.  The motion was recorded backwards to give the floating effect.

25. SPIELBERG AND MATHISON WORKED ON E.T. DURING FILMING
Steven Spielberg and Melissa Mathison wrote a script during the shooting of Raiders of the Lost Ark.  Mathison was visiting her husband, Harrison Ford at the time and Spielberg had an idea which would eventually become E.T. The Extra Terrestrial.

Still hungry for more facts?  Here's 35 facts on E.T. The Extra Terrestrial and 10 Facts on Steven Spielberg's The Terminal