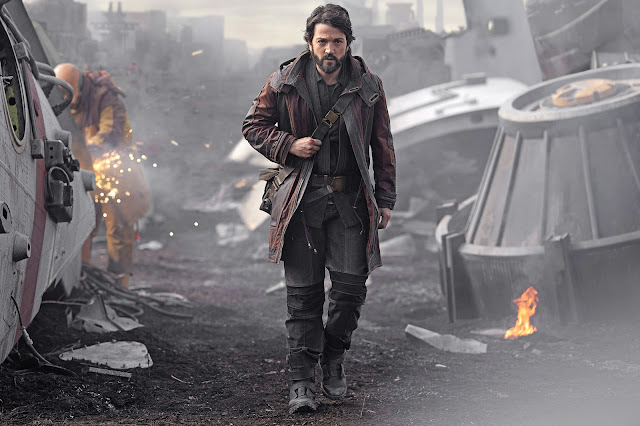 Words you will not find in this initial recap of Andor:
"Adult."
"Gritty."
"Mature."
"Slow Burn."
Almost in lock-step, professional publications and Disney-chosen influencers have used identical verbiage to describe the first three episodes of Star Wars: Andor, which bowed on Disney Plus Wednesday, September 21.
You'll find many of those same influencers declaring this to be THE BEST STAR WARS SERIES EVER, based on 25 percent of the first of two seasons being revealed.
After viewing the first three episodes, I was left with one question:
"Where was the 'Star Wars' in this latest Star Wars show?" 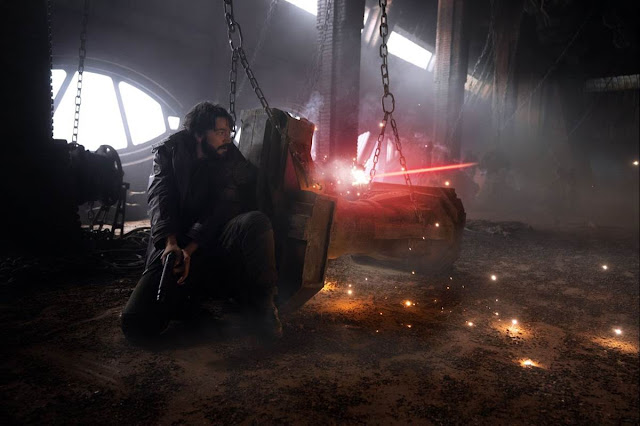 Don't get me wrong, from a technical standpoint, Andor appears outstanding on every level. The production design, acting, music, environment and characters are all compelling and draw in the viewer in no time. We feel immediately part of this world Cassian Andor (wonderfully played by Diego Luna) stalks around in.
The show's timeline setting - between Revenge of the Sith and A New Hope - is my favorite era in the franchise. And I'm certain, starting with the fourth episode, we will begin to see how these first three fit into the bigger picture of the Star Wars galaxy.
Piece by piece, the first three episodes of Andor are a triumph. So why was I left with a more negative impression than a positive one?
Episodes 1-3 felt more to me like a generic science fiction dystopian story. Outside of the presence of the main character, who we already identify with Star Wars, these episodes were lacking in anything that gave even the slightest hint they take place in our beloved galaxy far, far away.

Star Wars has always contained the core values of hope, found family, the hero's journey and redemption. There's not a whiff of any of those in these first three episodes.
We're introduced to the security division of the Corporate Sector. What is that organization's relationship to the Empire? Who knows! It is never remotely addressed.
The only other clue I could find of anything Star Wars was the Confederacy of Independent Systems logo on the shoulder of one of the crashed ship personnel on Kanari during the flashback sequences to Cassian's childhood. But even that is in question, because a character points out the crashing ship, saying "It's a Republic ship" which again, makes no sense if the crew of the ship are wearing Separatist logos on their uniform.

When we first meet Cassian, he tells one of the brothel hosts he's looking for his sister, who, like him, is from Kanari. But there is no mention of the sister ever again in the first three episodes. And just as quickly as he declares he's looking for a sister, Cassian's mission seems to change on a dime. In the next scene after he kills the Corporate security guards, he's trying to sell an Imperial communications component. A component that is left behind when Luthen Rael (played by Stellan Skarsgard) spirits him off-planet, presumably to join the yet-unseen Rebel Alliance.
So what's the deal with Cassian's sister? It appears to be nothing more than a red herring at this point. And this super-important Imperial component? Another red herring?

The low point for me came near the end of the third episode, in the frame pictured above. A Corporate Sector security guard, after a long camera zoom, says "Shit. We're under siege."
For a fan base that freaked out so much over the Han-Greedo change in the Special Edition of A New Hope in 1997, this purposeful departure from what Star Wars is has been met with universal applause.
Why?
What was the purpose of that character saying that word in that fashion at that time? The only interpretation I have is the filmmakers wanted to make a statement about being "dark and harsh" rather than being honest to the core values of what the franchise is. That line pulled me 100 percent out of the story and felt like a stiff arm against the franchise. 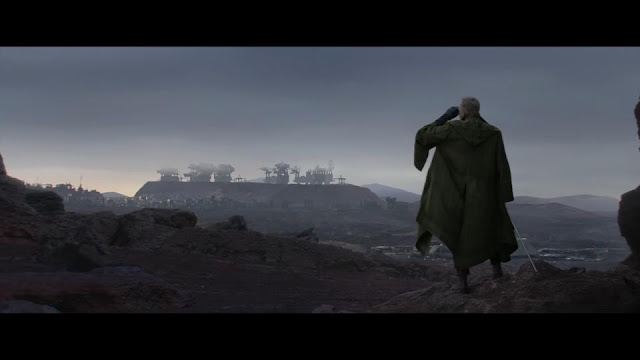 Now. Having said all that, everything I've written here carries with it the understanding that I have seen exactly one-quarter of the first season. The story will expand and evolve over the next nine episodes, and into the second and final season. I'm certain more elements of Star Wars will filter into the story as we progress, and perhaps that will allow me a greater respect of the place these first three episodes occupy within the franchise. I don't want to be the type of fan that says "Change Bad." So far, Andor gives us a detailed look at a completely new corner of the galaxy, and that's a wonderful thing. And the structure of the first three episodes is exactly like how the first four episodes of The Book of Boba Fett are structured, alternating between flashbacks and present-day. I say that for everyone using criticism of BOBF to artificially prop up Andor.
I don't know if my initial reaction to this batch of episodes reflects the work itself, or how the fandom has generally reacted within the context of past Star Wars content on Disney Plus. I also have no doubt my view of the newest Star Wars show will grow more positive. Once we see something resembling Star Wars in this Star Wars show, at least.
Brad Monastiere
I live in Michigan and have been an unconditional fan of Star Wars and Indiana Jones for decades. Follow me on twitter @bmonastiere
The Bearded Trio - The Site For Steven Spielberg, George Lucas, John Williams and a whole lot more.