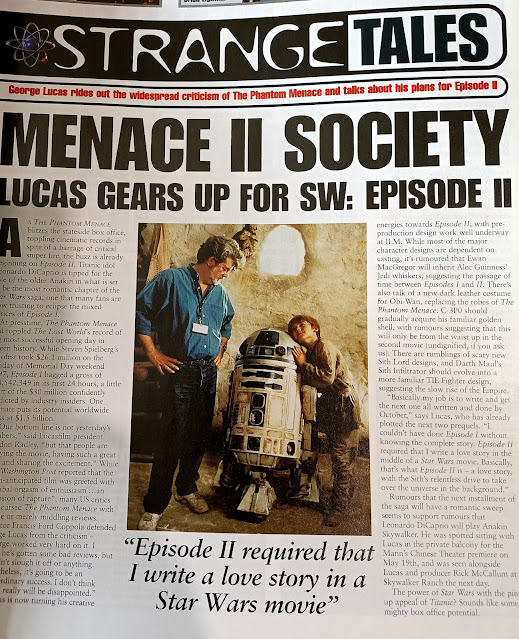 On the opening weekend of The Phantom Menace, Rumours Were Already Happening for Episode II

If there's one thing I like doing is reading a magazine from years ago just to see what wild rumours were doing the rounds back then.  Back in '99 the hype was of course for Star Wars: Episode 1 - The Phantom Menace.  But in July's edition of SFX the attention was already leaning towards the sequel!
The article on page 13 (shown above) was obviously written on the opening weekend of The Phantom Menace where it states the movie had toppled "The Lost World's" record of most successful opening day in screen history.  "While Steven Spielberg's dinofest took $26.1 million on the Sunday of Memorial Day weekend 1997, Episode 1 bagged a gross of $28,542,349 in its first 24 hours, a litle short of the $30 million confidently predicted by industry insiders.  One estimate puts its potential worldwide gross at $1.5 Billion."
The Lucasfilm President of the time, Gordon Radley said "our bottom line is not yesterday's numbers but that people are enjoying the movie, having such a great time and sharing the excitement."
The focus then turns to Episode II where the biggest rumour it seems was Leonardo DiCaprio a dead cert to play an "older Anakin."  Also rumoured was Ewan McGregor (spelt MacGregor in the article) was to inherit Alec Guinness' Jedi whiskers indicating the passage of time between the two movies.  There was also speculation about C-3PO gradually acquiring his familiar golden shell with one rumour he will only have the shell from the waste up.
George Lucas was also quoted about the second movie, "Basically my job is to write and get the next one all written and done by October...I couldn't have done Episode 1 without knowing the complete story.  Episode II required that I write a love story in the middle of a Star Wars movie.  Basically that's what Episode II is - a love story, with the Sith relentless drive to take over the Universe in the background."
This romantic vibe of Episode II seemed to back up the rumour of DiCaprio playing Anakin Skywalker.  He was even spotted with George Lucas on the private balcony of the Mann's Chinese Theatre premiere on May 19th and even at Skywalker Ranch the next day with George and Rick McCallum.
Away from the galaxy of Star Wars other rumours circulating was that the Scottish legend that is Sean Connery was set to play Gandalf in the upcoming Peter Jackson adaption of The Lord of the Rings. 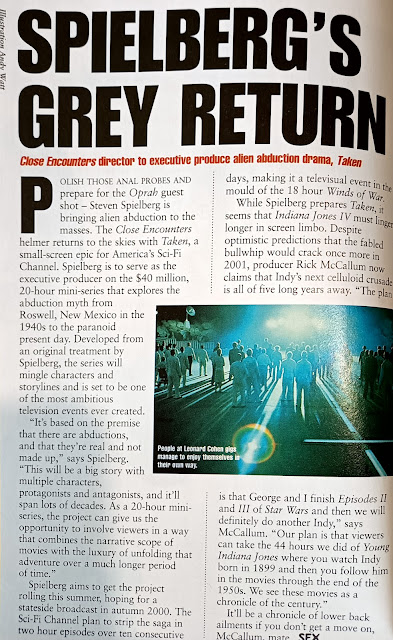 Steven Spielberg didn't escape a bit of attention too with the news that "Taken" is set to hit the small screens.  Spielberg onboard as executive-producer is set to return to the world of aliens and UFOs with this $40-million, 20-hour mini-series.  It's set to be one of the "most ambitious television events ever created."  "It's based on the premise that there are abductions and they're real and not made up" said Spielberg.
In the same article it shifts to the inevitable talk of Indiana Jones IV.  The current rumour was it was due to hit screens in 2001 but with George tied up with the prequels and Spielberg with various projects it's now looking like it won't be for at least five years.  Rick McCallum stepped in with  a quote "the plan is that George and I finish Episode II and III of Star Wars and then we will definitely do another Indy...Our plan is that viewers can take the 44 hours we did of Young Indiana Jones in 1899 and then you follow him in the movies through the end of the 1950s.  We see these movies as a chronicle of the century."
Do you remember a particular whacky rumour/rumor about Star Wars or another movie?  Let us know in the comments below.  More rumour articles coming soon.
The Bearded Trio - The Site For Steven Spielberg, George Lucas, John Williams and a whole lot more.