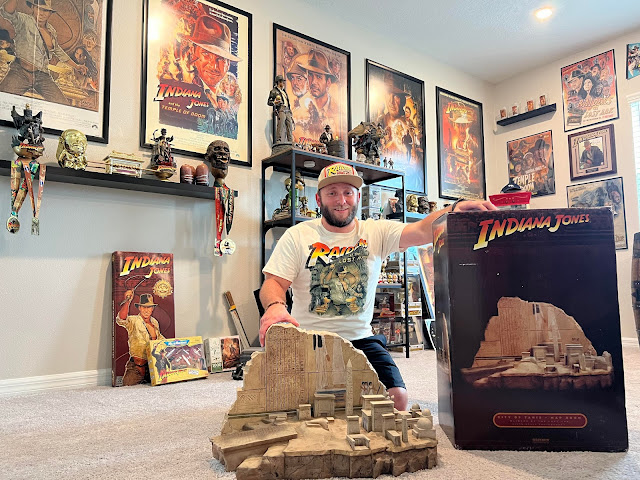 Indiana Jones found fortune and glory by searching for long-lost treasures. He also found some love along the way.
Alex Arnold is also searching for treasures. Those treasures just happen to be Indiana Jones in nature, a search Alex does for the love of the franchise.
Alex, 34, a registered nurse and a resident of Tampa, Florida, is an avid collector of Indiana Jones memorabilia, and is an active member of the Facebook group Indiana Jones and the Collector's Covenant. Like so many of us, he fell in love with the franchise as a youngster, and exhibits that love with an impressive Indy collection he displays in his home.
He was generous enough to sit with me for a Q&A with me (Brad) to talk about his collection, what he enjoys most about the franchise, and - of course - what his Holy Grail of collecting would be. Enjoy! 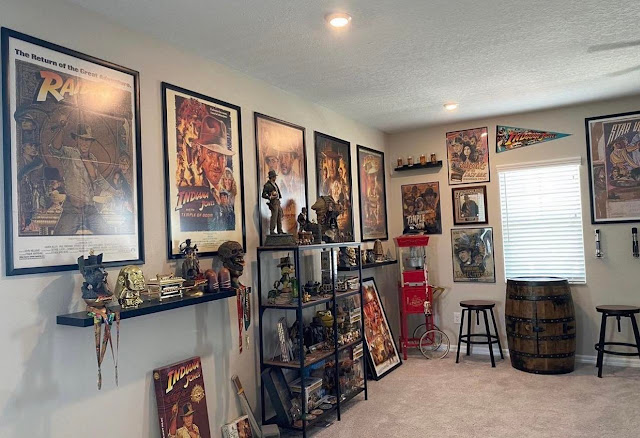 Q: Describe your first experience with the Indiana Jones character and franchise. Did you see the films in the theater?
A: My first experience with Indiana Jones was when I was 5 years old so I didn’t get to see the movies in the theater until later years when they were re-released. I remember watching the movies with my family and instantly fell in love with them. When I was younger I remember they made those little rubber snakes that coiled up and I would pretend that was my whip (ironic I know, he hates snakes) and I would wear a cowboy hat and pretend to be Indy. I even had a little notebook I would take around with me acting as the grail diary.
Q: What can you identify as the very first piece of your current collection?
A: My first piece of my collection was the Blockbuster resin DVD case that I received from my uncle when he worked at Blockbuster. 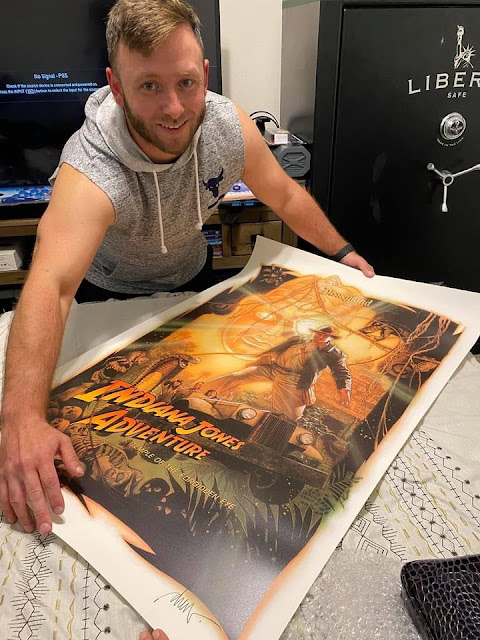 Q: What resources (other than ebay) do you typically use to add to your collection?
A: I use the other Indiana Jones Facebook groups and my Disney annual passes to get the newer items coming out.
Q: When the Indiana Jones consumer products revival happened in 2008, did you consider yourself a completist with everything that came out then, or were you more selective?
A: I have always been a completionist unfortunately. I have to have it all!
Q: Share with us a story that represents the furthest lengths you have gone to acquire a sought-after piece of your collection.
A: I have gotten a hotel in Orlando so I could be close to Disney and wake up early and get to Disney Springs at 4am to make sure I could secure the 10” Funko Pop! They came out with. Unfortunately they had so many there was no need to do that but this was the first item they released one in a while and the last time they did, it sold out rather fast so I didn’t want to take any chances. 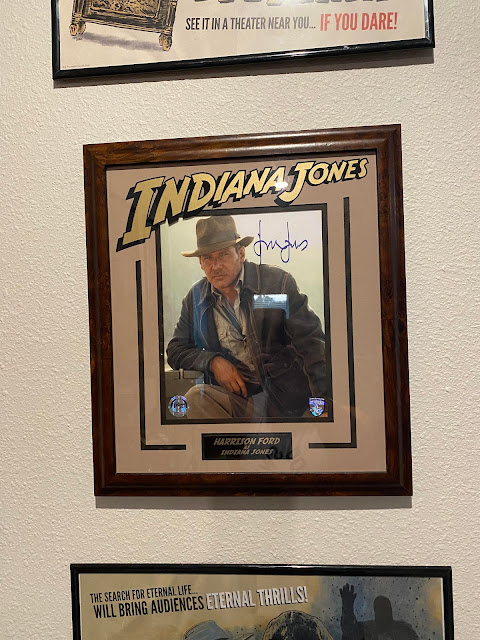 Q: What do you consider to be the most treasured part of your collection, and why?
A: My Harrison Ford autograph is by far my “Holy Grail” of my collection. It will most likely be the closest I’ll ever get to meeting him (which is the number one thing on my bucket list in life). 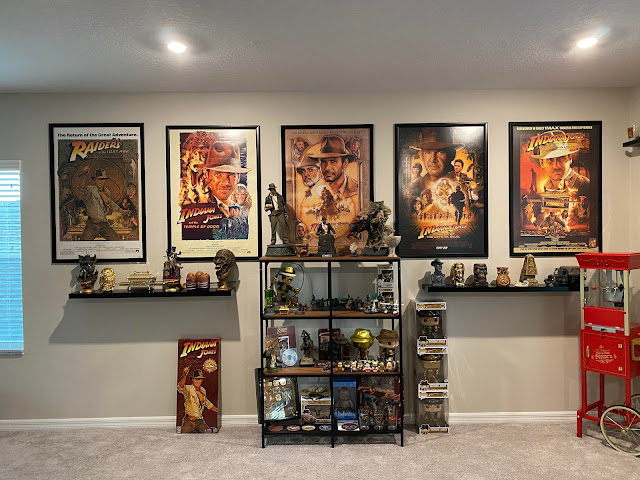 Q: Is there a - wait for it - holy grail item you'd like to add to your collection that you currently do not have?
A: The number one thing I would love to add to my collection would simply be just a picture with Mr. Ford and myself (meeting him). I don’t think that will ever happen though. Unfortunately.

Q: What do your closest family members think of your collection?
A: They are pretty impressed. They don’t get the obsession but that’s okay. 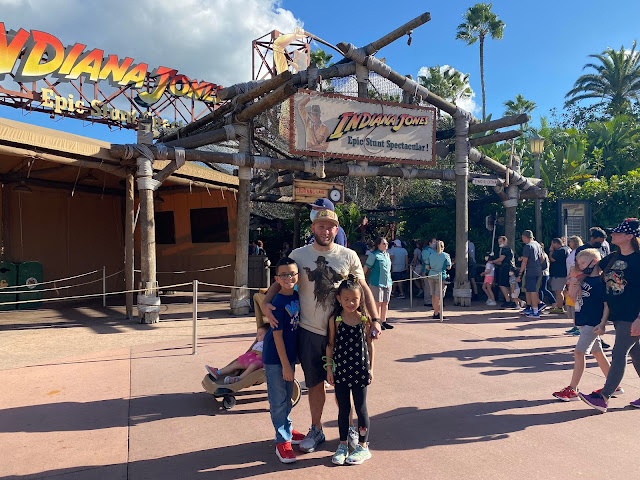 Q: Hasbro has stated publicly it intends to revive the Indiana Jones brand in 2023 ahead of the release of Indiana Jones 5. If you were in charge of the Hasbro Indiana Jones brand, how would you lay out the product roll out plan and what items would it include?
A: I would love to cover all the movies and do a 6 inch line and do a retro Kenner line like they did with the Star Wars Kenner collection.

Q: What are your thoughts on Indiana Jones 5?
A: I remain optimistic. Mangold is a heck of a director and he’s good at closing stories and I hope that’s what this one does. I’m just excited for anything that has to do with Indiana Jones, honestly.

Q: Sum up, in your words, what the character of Indiana Jones, and the franchise as a whole, mean to you.
A: Indiana Jones and the franchise as a whole means everything to me. It takes me back to my much younger days when I would pretend to be him as a child and reminds me to always seek adventure. To veer off the regular path every once in a while, to take chances. I was lucky enough to meet Fred Sorenson who played Jock Lindsey (one of the nicest gentlemen I’ve ever met) and became good acquaintances with him. I spent a couple of hours with him and had a few drinks and he signed a picture for me and it said “always seek adventure” and I live by that now. It’s a memory I will never forget. Indiana Jones just brings me so much joy. Especially with being a nurse in these trying times, I can go home sit down and turn these movies on and just escape reality for a little bit.
All photos courtesy of Alex Arnold