THE BOOK OF BOBA FETT CHAPTER 6: FROM THE DESERT COMES A STRANGER RECAP

Book of Boba Fett Chapter 6: From the Desert Comes A Stranger
Director: Dave Filoni
Writer: Jon Favreau and Dave Filoni
Air date: February 2, 2022
After viewing Wednesday's sixth chapter in Star Wars: The Book of Boba Fett, some people have expressed confusion as to what the proper title of the show they're watching actually is.
Don't overthink this. It's Star Wars, through and through . And with this chapter, From the Desert Comes A Stranger, the show's connections to the greater saga have never been stronger.
Dave Filoni stepped into the director's chair and shared writing credits with Jon Favreau in this all-star episode, which welcomes characters and themes from every corner of the galaxy far, far away.
The episode opens with Cobb Vanth, last seen in the season 2 premier of The Mandalorian, chasing away Pyke Syndicate spice traders from his Mos Pelgo territory. He's a quick draw with his blaster, dispatching three of the four Pyke agents.

We then cut to Din Djarin in his newly modified N1 Starfighter en route to visit his charge, Grogu. He arrives on an unnamed, but familiar planet where he is greeted by none other than R2-D2. Artoo stalls him, when we cut to a scene under a tree in a clearing among a bamboo forest. We see Luke Skywalker meditating with Grogu. We also see a small, stone temple under construction by ant droids. To me, that's a strong indicator we're seeing Luke's Jedi academy, seen in flames in a flashback in Star Wars: The Force Awakens, under construction.
As Din awaits his reunion with Grogu, he is startled to see Ahsoka Tano watching him. Ahsoka has joined Luke and Grogu on this planet as Grogu's Jedi training begins. Ahsoka convinces Din that it's a bad idea for him to visit Grogu, given how adverse to attachment the Jedi are. Din reluctantly agrees, flying back to Tatooine. 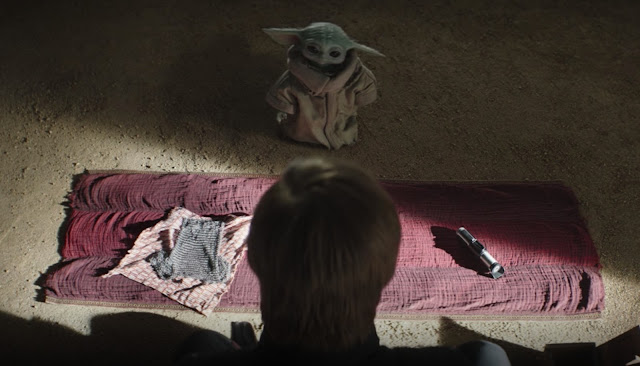 An extended training montage with Luke and Grogu follows, with Grogu situated in a backpack very similar to the one Yoda rode in with Luke in Star Wars: The Empire Strikes Back. Grogu begins to control more aspects of the Force, from flip-jumping to deflecting blaster bolts from a remote. This part of the episode concludes with Luke offering Grogu a choice: the Beskar chain mail armor Din made for him, or to take possession of Yoda's lightsaber and ensure his Jedi path. Meanwhile the choice of the armor would bring about a reunion with Din, but would close off any further Jedi training. This matches the choice the lone samurai gave his young son in the classic serialized television show Lone Wolf and Cub, on which The Mandalorian was loosely based. I also detected a hint of Kylo Ren's music during this closing sequence.
Back on Tatooine, Din enlists the help of Vanth to build up foot soldiers for the impending battle with the Pykes. Vanth reluctantly agrees, but his plans could be cut short. 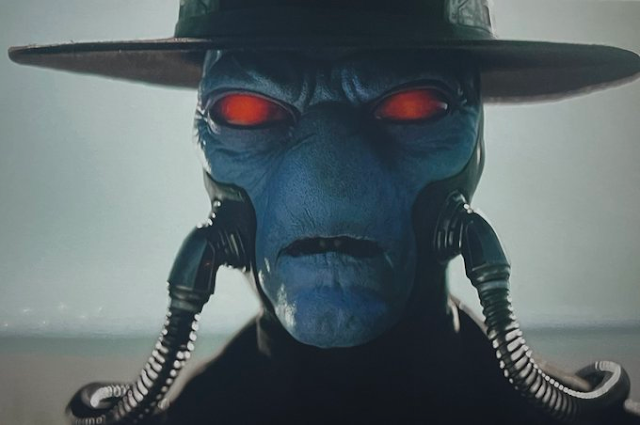 In a classic Western-inspired showdown, Vanth is greeted by a dark stranger in a hat emerging from the desert heat waves. It is Cad Bane, the bounty hunter first introduced in Star Wars: The Clone Wars. Bane warns Vanth to stand down and allow the Pykes to run spice anywhere it wishes in and through Mos Pelgo. So Vanth was a quick draw earlier, right? Well he wasn't quick enough here. Bane catches him with a blaster shot to the shoulder, and Vanth is down, unconscious while folks in the town try to  revive him. Vanth's death is neither confirmed nor denied here, and my guess is he'll pay a visit to the Mod shop on Tatooine and join Fett in the coming confrontation against Bane and the Pykes.
As with most penultimate episodes of television, there was a lot going on here. The CGI work done for Luke Skywalker, to me, easily surpassed what we saw of him in The Mandalorian. Much more subtle detail in his facial expressions, and Mark Hamill is once again given a credit for reprising his part at the end of the episode. Many things "got" to fans watching this episode, but it was Luke for me. He is so calm, at peace, enjoying his time with Grogu. After everything he endured, all the trauma, slaughtered parental figures, the lost hand, the battle for his and his father's souls, here he is, in the most natural environment possible, patiently training Grogu in the ways of the Force. Just as Yoda told him, he is passing on what he has learned.
Season finale. Next week.
Brad Monastiere
I live in Michigan and have been an unconditional fan of Star Wars and Indiana Jones for decades. Follow me on twitter @bmonastiere
The Bearded Trio - The Site For Steven Spielberg, George Lucas, John Williams and a whole lot more.