BOOK OF BOBA FETT SEASON 1 RECAP: WHERE WE'VE BEEN, WHERE WE'RE GOING 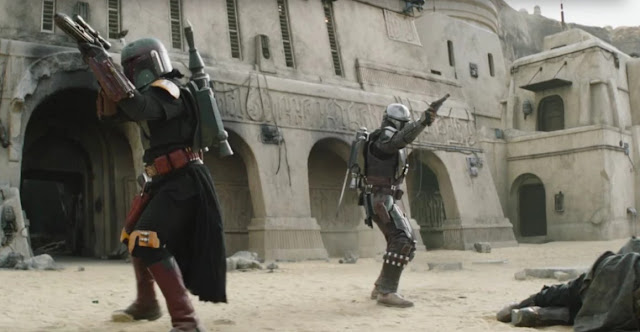 The show we were first teased about 14 months ago has finished its first season.
As everyone was calming their emotions from seeing the return of Luke Skywalker in the season 2 finale of The Mandalorian, we got a post-credit teaser announcing the Disney Plus show The Book of Boba Fett. BOBF saw its first season come to an end Wednesday with the chapter In the Name of Honor. It was a fitting and satisfying end to a wonderful seven-episode run that saw Fett solidify his spot as the new boss of Tatooine while Din Djarin and Grogu sped off into space, awaiting that show's third season.
What follows is a summary of the events and key character movements from The Book of Boba Fett's first season. 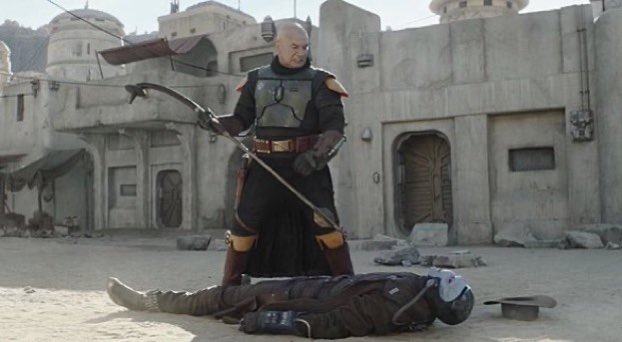 Boba Fett: The Road Less Taken
The show's structure gave us insights into not only Boba Fett in the present day, but picked up his story immediately after his plunge into the Sarlacc pit in Return of the Jedi. The flashback sequences filled in gaps I have wondered about for more than 30 years, as we saw Fett deep in the bowels of the Sarlacc, and how he worked his way out. "Boba Fett crawling out of the Sarlacc pit" has been one of the most commonly imagined sequence in the heads of Star Wars fans for a very long time, and we actually got to see it play out in screen.
Fett then goes on a journey that sees him robbed of his armor, taken in by a Tusken Raider tribe, and goes through a reinvention process where he comes out a far different person. The Tuskens taught him how to be a leader, how to look out for someone other than himself. It was a mini version of the Hero's Journey Star Wars is so famous for.
It was certainly a departure from the Fett many fans held in their heads over the past three decades. The Fett we saw in the flashback scenes showed a man who was broken and able to put himself back together. A man of somewhat middle age, which is such a departure from the typical early 20s hero-in-training we normally see from the franchise. The selfless leadership he learned from the Tuskens directly transferred over into his leadership style in Mos Espa, where he wanted to do the most good for the most amount of people.
I enjoyed every minute of Fett's character development. It was vast, unexpected and well-rounded. He still carries that hint of brutality with him - see the fight with Cad Bane - but he's matured, well beyond that cold-blooded bounty hunter we first met 42 years ago. 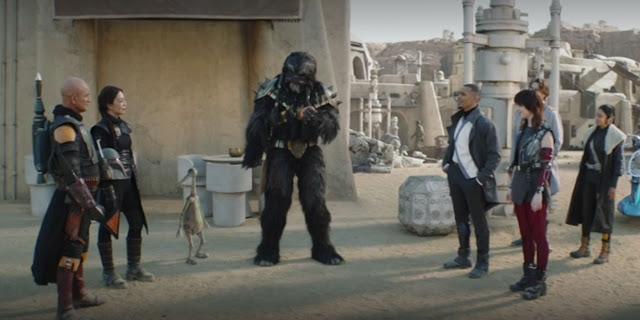 This Is A Star Wars Show
Chapters 5 and 6 saw Boba Fett achieve approximately 10 seconds of screen time. And even though we got some outstanding Din Djarin/Ahsoka Tano/Luke Skywalker content in those two episodes, the discourse howled about "where is Boba Fett in the Boba Fett show?"
If you think of The Book of Boba Fett as less a Boba Fett show and more of a generically labeled Star Wars show, you'd see the discourse quiet (at least about this).
In production, the show was loosely referred to as Season 2.5 of The Mandalorian. That was reinforced by the presence of Din Djarin and Grogu in those two aforementioned episodes. Weaving Luke in helped the show become an essential puzzle piece into the greater, more galactic story in the post-ROJ universe.

Din Djarin and Grogu Continue to Lead the Star Wars Renaissance
Chapter 5 took The Book of Boba Fett into a sharp turn away from the events on Tatooine and surprisingly reunited the audience with Din Djarin - The Mandalorian - as he negotiated life after giving Grogu over to Luke.
The year 2019 was such an interesting one in the real world history of Star Wars. The Rise of Skywalker brought the nine-episode saga to a conclusion, but not without a good deal of consternation (rightfully so). It was, to say the least, a confusing third chapter of a trilogy that pales in comparison to two previous third parts of trilogies in 1983 and 2005.
But a month before TROS came out, Disney launched its first streaming service with The Mandalorian as the headliner. It opened a new era of Star Wars storytelling, and thanks in no small part to Baby Yoda (Grogu), it opened up the franchise to an even wider audience.
The Book of Boba Fett was humming along, an unassuming show centered on a popular, though not primary character, but then exploded when Din Djarin and Grogu were reintroduced in the fifth and sixth chapters. People were thrilled to see their favorite space dad-child combination return to the screen, and suddenly, BOBF was playing a part in a much larger arena.
When I think of Star Wars after ROJ, I don't really think of the sequel trilogy as much as I think of The Mandalorian. That's a credit to Jon Favreau, Dave Filoni, Doug Chiang, Ludwig Goransson, Pedro Pascal and all of the key players that helped embed the Beskar-armored man as an essential part of the franchise.
Word is the third season of The Mandalorian will wrap filming late next month and could be headed for a Christmas release. However it happened, I am just thrilled that Star Wars has found a way to reinvent itself, kind of like how Boba Fett did in the show that just ended.
As George Lucas is fond of saying, it all rhymes.
Brad Monastiere
I live in Michigan and have been an unconditional fan of Star Wars and Indiana Jones for decades. Follow me on twitter @bmonastiere
The Bearded Trio - The Site For Steven Spielberg, George Lucas, John Williams and a whole lot more.