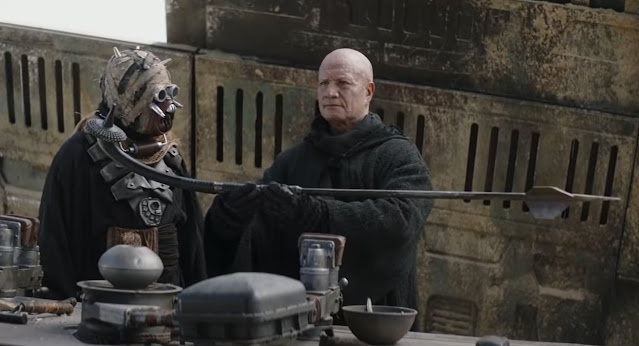 Book of Boba Fett Chapter 2: Tribes of Tatooine
Director: Steph Green
Writer: Jon Favreau
Air date: January 5, 2022
After a 38-minute premier episode, we got to enjoy a much longer second entry in the first season of Star Wars: Book of Boba Fett, Tribes of Tatooine, which aired Wednesday.
For 52 minutes, we dug deeper into Boba Fett's past and present, this time with just one changeover from the present day to the (more recent) past. I was pleasantly surprised to see the positive response this episode got from Star Wars discourse. My guess, upon viewing Tribes of Tatooine, was that the fandom would like this one less than the premier. The opposite was true, which reaffirms my complete inability to read which direction this fandom will go to a new slice of the story.

In both the present day and flashback, we see Fett growing in confidence from the low points he was at in the first episode. In the present, Fett is more confident and assertive in Tribes of Tatooine, being more defiant when meeting the mayor of Mos Espa along with the Hutt cousins who tried to claim the territory now belonging to Fett.
He experiences a similar rise in strength, status and confidence within the Tusken Raider tribe that took him in during Stranger in a Strange Land. Again, we see parallels to The Godfather, specifically the 1974 sequel The Godfather Part II where we see Michael start to rise in status and confidence at similar spots in the simultaneous stories that are being told. This episode featured deep-cut cameos from characters from the past in both parts. Black Krrsantan, a deadly Wookiee bounty hunter, shows up with the Hutts to represent a threat to Fett in the present. Black Krrsantan was first shown in the 2015 Darth Vader comic and has since been a frequently recurring character in canon comics throughout the various titles.
In the flashback portion, we see a biker gang terrorize the beloved Toche Station, including two familiar patrons, Camie and Fixer. They were friends of Luke Skywalker whose scenes ended up on the cutting room floor of Star Wars: A New Hope. The actors cast seemed properly aged in-universe from their appearance in the very first film, and I instantly recognized them.
The flashback portion takes up more than half the episode, and features Fett being trained in Tusken-style combat, helping the tribe eliminate a threat posed by the Pyke Syndicate, and is eventually fully accepted by the tribe after a wonderfully trippy sequence where a peyote-style lizard jumps into his head and he goes on a vision quest to acquire his gaffi stick. Trippy Star Wars is among my favorite Star Wars (see the Clone Wars Mortis and Yoda arcs). That sequence concludes with Fett being wrapped in the dark Tusken-style robes we first see him in during his reintroduction in season 2 of The Mandalorian. This indicates the flashback sequences are getting closer to catching up, time-wise, to the present day within the show.
I am till enjoying the slow-moving development of Boba Fett the character, both in the present and recent past. An experience like the Sarlacc pit represents a true reset for anyone who endures it. There are still strong indicators of links to the greater galaxy, particularly in the presence of the Pyke Syndicate, who are present in both The Clone Wars and Solo: A Star Wars Story. The show is giving me everything I could have asked for so far. Let's keep the train going.
Brad Monastiere
I live in Michigan and have been an unconditional fan of Star Wars and Indiana Jones for decades. Follow me on twitter @bmonastiere
The Bearded Trio - The Site For Steven Spielberg, George Lucas, John Williams and a whole lot more.