Book of Boba Fett Chapter 1: Stranger in a Strange Land
Director: Robert Rodriguez
Writer: Jon Favreau
Air date: December 29, 2021
For just over one (very long) year, Star Wars fans have awaited a show speculated about for nearly 20 years. A live action series with bounty hunter Boba Fett as the central character.
The post-credit scene in the final episode of the second season of The Mandalorian confirmed The Book of Boba Fett would be a brand-new series on Disney Plus, and Wednesday, the show aired its first episode, Stranger in a Strange Land.
I saw references to The Godfather as well as Iron Man in this episode, which I feel was a very strong opening to this seven-episode season.
The episode is bookended by extended flashback scenes, taking place within dreams Fett is having while healing in a bacta tank. The center of the episode is the "present day," taking place right after the events in the aforementioned post-credit scene.
The Boba Fett we meet in this episode is far from the indestructible bounty hunter many fans dreamed up in their minds based on his limited appearances in the Original Trilogy. We open by seeing play out, a scene many had waited decades to see - Boba Fett crawling out of the maw of the Sarlacc pit on Tatooine. It is an extremely well-done sequence that doesn't linger too long, but makes logical sense. The set design of the Sarlacc's interior seemed spot-on to me. 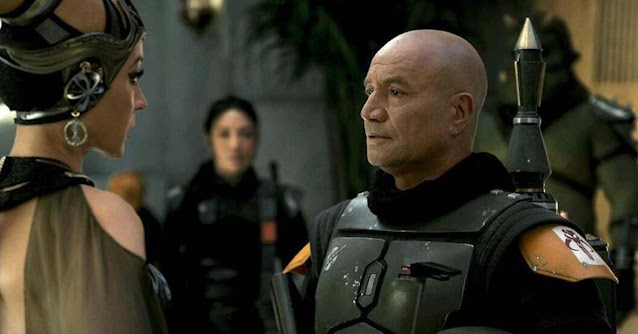 Fett is robbed of his armor by obnoxious Jawas, then taken prisoner by a band of Tusken Raiders. Here, the Raiders are shown in a new way compared to every other time we've seen them in canon. Different ranked Raiders are dressed differently, and a Tusken child plays a prominent role in the episode. It also builds a link to the look we see Fett in during the final scene of the season 2 debut of The Mandalorian, when he is fully revealed for the first time.
The flashback scenes detail Fett's rough treatment by the tribe of Tuskens. He is beaten, ordered to dig in the dirt and given little in the way of food or water. When he slays a sand creature, and the Tusken child gets the glory for bringing back its head, the lead Tusken recognizes Fett's talents and grants him a long drink of water. I felt a lot of Iron Man vibes during the flashback sequences. In the beginning of that film, Tony Stark is held captive in a primitive cave, hanging onto life by a thread while he works his way out of this untenable situation. Lot of parallels there to Fett during these flashback scenes.

In the "present day" Fett's position as Tatooine's new crime lord is cemented by the lower-level crime bosses coming to pay him tributes. Fett is referred to as a Damiyo, a Japanese term that loosely translates to feudal lord. Again, we see a Japanese influence in Star Wars, something present throughout the real-world history of the saga.
The mayor's majordomo does not acquiesce to Fett, immediately setting up a conflict, one played out shortly after the throne room scenes with a battle between a squad of six assassins and Fett and Fennec Shand. Fett is far from dominant in this fight and requires rescuing from the two Gamorrean Guards he just hired. His mortality here is noteworthy, as well as his urgency to revisit the bacta tank so quickly after the fight.
Star Wars has most commonly been associated with "coming of age" stories, most notably in the Original Trilogy and Sequel Trilogy. Based on this episode, The Book of Boba Fett seems to be taking an opposite approach. It is of a man perhaps past his best days and attempting to reassemble himself into a newer version of what he once was. It is a compelling story, one I am fascinated to see if it continues along this same track.

I also anticipate conflict between Fett and Shand. In scenes the two shared in the throne room, they disagreed with one another on almost everything. Fett's ruling DNA is that more of substance than style, while Shand wishes Fett would cast the spotlight of power more onto himself.
Two production aspects of this episode stood out to me. The makeup work done by Brian Sipe was tremendous. Actor Temeura Morrison looked like he had been through some things, and his acting stood tall, along with the terrific makeup work Sipe and his team did.
This episode didn't have earth-shattering reveals like the first two season openers of The Mandalorian. But this didn't need that. It is a story of a character we already know, in a setting we're familiar with, but taking a new path. Music composer Joseph Shirley made his Star Wars debut here and put together a soundtrack that fit in perfectly with this world and this character. He carries on the unique style established by The Mandalorian composer Ludwig Göransson.
This was a terrific way to start this series. It didn't have to do too much, just get us familiar not with the Boba Fett of old, but the Boba Fett of the now.
Brad Monastiere
I live in Michigan and have been an unconditional fan of Star Wars and Indiana Jones for decades. Follow me on twitter @bmonastiere
The Bearded Trio - The Site For Steven Spielberg, George Lucas, John Williams and a whole lot more.