STAR WARS: BOOK OF BOBA FETT TO PREMIER ON DISNEY PLUS ON DECEMBER 29 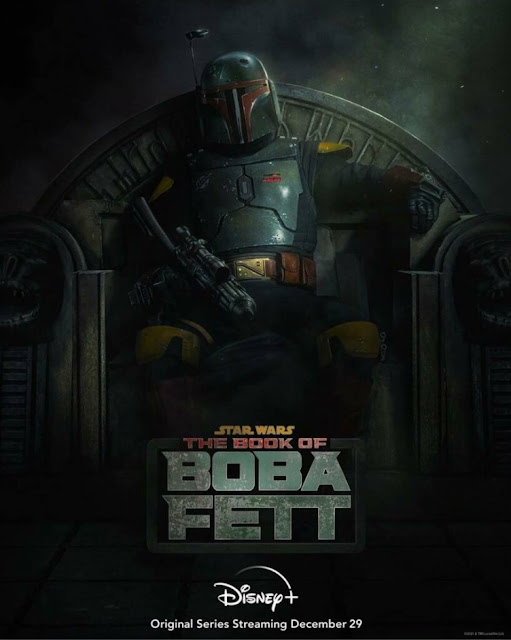 The year 2022 from a Star Wars standpoint will be one of the busiest in the history of the franchise. That year gets off to an unofficial start a couple days early when Star Wars: The Book of Boba Fett lands on Disney Plus on Wednesday, December 29.
The official site posted the release date and a brief synopsis here.
From TOS release:
The Book of Boba Fett, a thrilling Star Wars adventure, finds legendary bounty hunter Boba Fett and mercenary Fennec Shand navigating the galaxy’s underworld when they return to the sands of Tatooine to stake their claim on the territory once ruled by Jabba the Hutt and his crime syndicate.

The Book of Boba Fett stars Temuera Morrison and Ming-Na Wen. Jon Favreau, Dave Filoni, Robert Rodriguez, Kathleen Kennedy, and Colin Wilson are the executive producers. Karen Gilchrist and Carrie Beck serve as co-executive producers, with John Bartnicki producing and John Hampian as co-producer.
The Book of Boba Fett leads a deluge of forthcoming Star Wars content to Disney's streaming service. In 2022 alone, following the Boba Fett show, Disney Plus will roll out Obi-Wan Kenobi, Andor and season 3 of The Mandalorian. Obi-Wan Kenobi and Andor have wrapped production while season 3 of The Mandalorian has just begun shooting.
The Hollywood Reporter mentioned in its release about the show that The Book of Boba Fett is one of 11 Star Wars series slated for Disney Plus in the coming years. That number counts quite a few unannounced shows in addition to what's already been known. In addition to the 2022 slate, we have Ahsoka, Lando and The Acolyte, which were all announced back in December. That leaves four unannounced shows that Lucasfilm and The Hollywood Reporter apparently know about, though none of the rest of us know about them. So, stay tuned, I guess?
The Book of Boba Fett was teased after the season 2 finale of The Mandalorian. We saw our favorite post-Sarlacc bounty hunter dispatch Bib Fortuna and take over the throne previously occupied by Jabba the Hutt on Tatooine. We do not know the number of episodes this season will contain. A closer look at the series was promised on Disney Plus Day, coming up on November 12, the second anniversary of the channel's debut.
Brad Monastiere
I live in Michigan and have been an unconditional fan of Star Wars and Indiana Jones for decades. Follow me on twitter @bmonastiere
The Bearded Trio - The Site For Steven Spielberg, George Lucas, John Williams and a whole lot more.