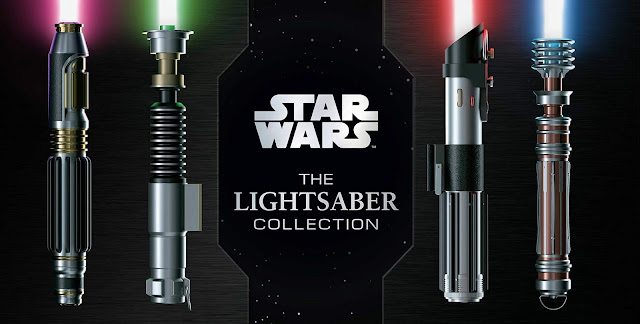 Once in a while, Star Wars publishing comes out with a completely unique reference book, and in the case of Star Wars: The Lightsaber Collection by Daniel Wallace, it is an absolute joy to consume.
Wallace has penned Star Wars reference books for many years, going back to the early years of the franchise's publishing revival in the 1990s. This stands out to me as one of his unique achievements, but more on the writing style in a bit.
One of the signature items in Star Wars is the lightsaber, an inspired invention by George Lucas going back to the earliest drafts of his screenplays for A New Hope. The lightsaber gets the gold star treatment here in this book, which serves as a close examination on the form and function of the weapon completely unique to this franchise.

The first thing that stands out about the book is its design. It was printed in an extreme rectangular shape format, which fits perfectly with the lightsaber layout. Without even opening up the book, the reader is clued in that he/she is going to get a close look at what must rank as one of the coolest weapons in the science fiction genre.
The inside front cover features some of the earliest drawings of what the lightsaber could look like, as drawn by the great Ralph McQuarrie. The very next page, we leap forward in time to what look like concept drawings for sabers featured in this book. 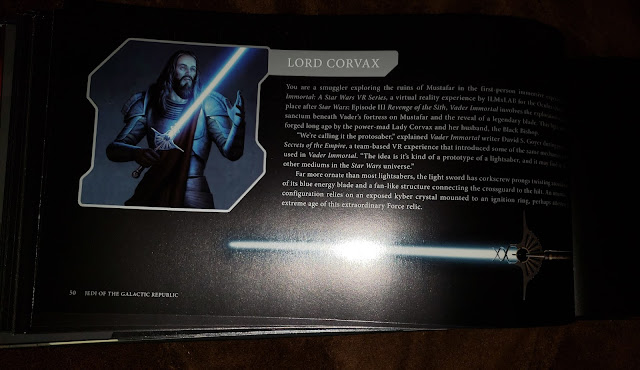 The table of contents lists characters for which sabers are covered in the book. The real world history of Star Wars can easily be traced from the prequel era Jedi right up to Rey Skywalker's yellow lightsaber as seen in the closing sequence of Star Wars: The Rise of Skywalker (2019). Contained within canon stories, this book is as comprehensive as it can get when cataloguing the various lightsabers Star Wars characters have wielded over the years.
Wallace then writes a series of introduction stories before getting into the pages that feature photos of the weapons. Wallace, to me, has always had a very easy-to-read writing style that gets right to the point and provides the reader with a great deal of clarity without unnecessary verbiage. These short stories volley between in-universe lore such as Lightsaber Training, to real-world designs as seen in Lightsaber Creation. This is a pattern that is carried out to the extreme in the main text of the book. 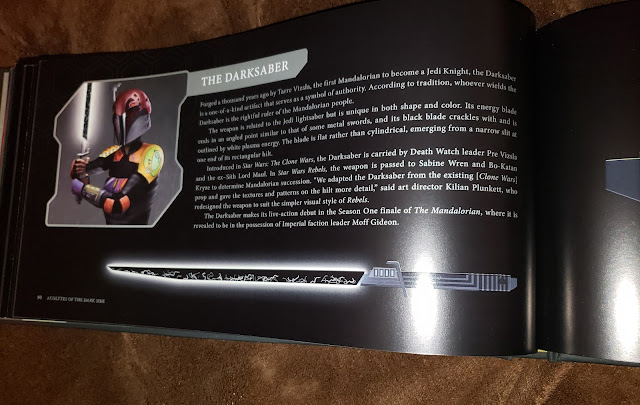 Starting with Aayla Secura, we are introduced to the lightsabers carried by light-side users, followed by dark-side users. Each page has either a wonderful illustration of the character with his/her saber followed by a close-up image of the saber handle or handles.
The text that comes next to each character illustration is very uniquely written in that it toggles between in-universe text followed by more real world text, sometimes in the very next sentence. With limited space, Wallace doesn't spend his words trying to transition from one kind of writing to the other. He mashes it together, which as a writer myself, I would find very challenging to pull off. But Wallace again does it effortlessly, painting a complete picture of that particular character's lightsaber in a short amount of text.

Some characters, like Darth Maul and the Jedi Temple Guard which have double-bladed lightsabers, are given the gatefold treatment, as their saber pages unfold to show them fully lit on both ends. A saber like the one wielded by Anakin Skywalker (prequels), Luke Skywalker (ANH and ESB) and Rey (sequel trilogy) is also given this treatment, highlighting the leather strap Rey applied to the saber as seen in Rise of Skywalker.
A real treat for me was seeing coverage of sabers not seen in any of the feature films. Weapons used by characters like Lord Corvax (Vader Immortal VR Series), the Darksaber, Inquisitor Sabers (as seen in Star Wars: Rebels) and Cal Kestis (Jedi Fallen Order video game) really round out this book and spread the width of established Star Wars canon through the completion of the Skywalker Saga theatrical releases.
This book is a must-own for any Star Wars fan. Although I purchase most of my books in the e-format for my Kindle, this is a book that can, and should, be purchased in its physical form. I think it's the only way to purchase it anyway, but regardless, this is a 150-page treat that does an outstanding job of focusing on one single element of the Star Wars saga, the one that not only makes this story so popular, but features the one weapon we have all fantasized about carrying ourselves from our childhood until today. Bravo, Daniel Wallace on such a joyus book.
Brad Monastiere
I live in Michigan and have been an unconditional fan of Star Wars and Indiana Jones for decades. Follow me on twitter @bmonastiere
The Bearded Trio - The Site For Steven Spielberg, George Lucas, John Williams and a whole lot more.