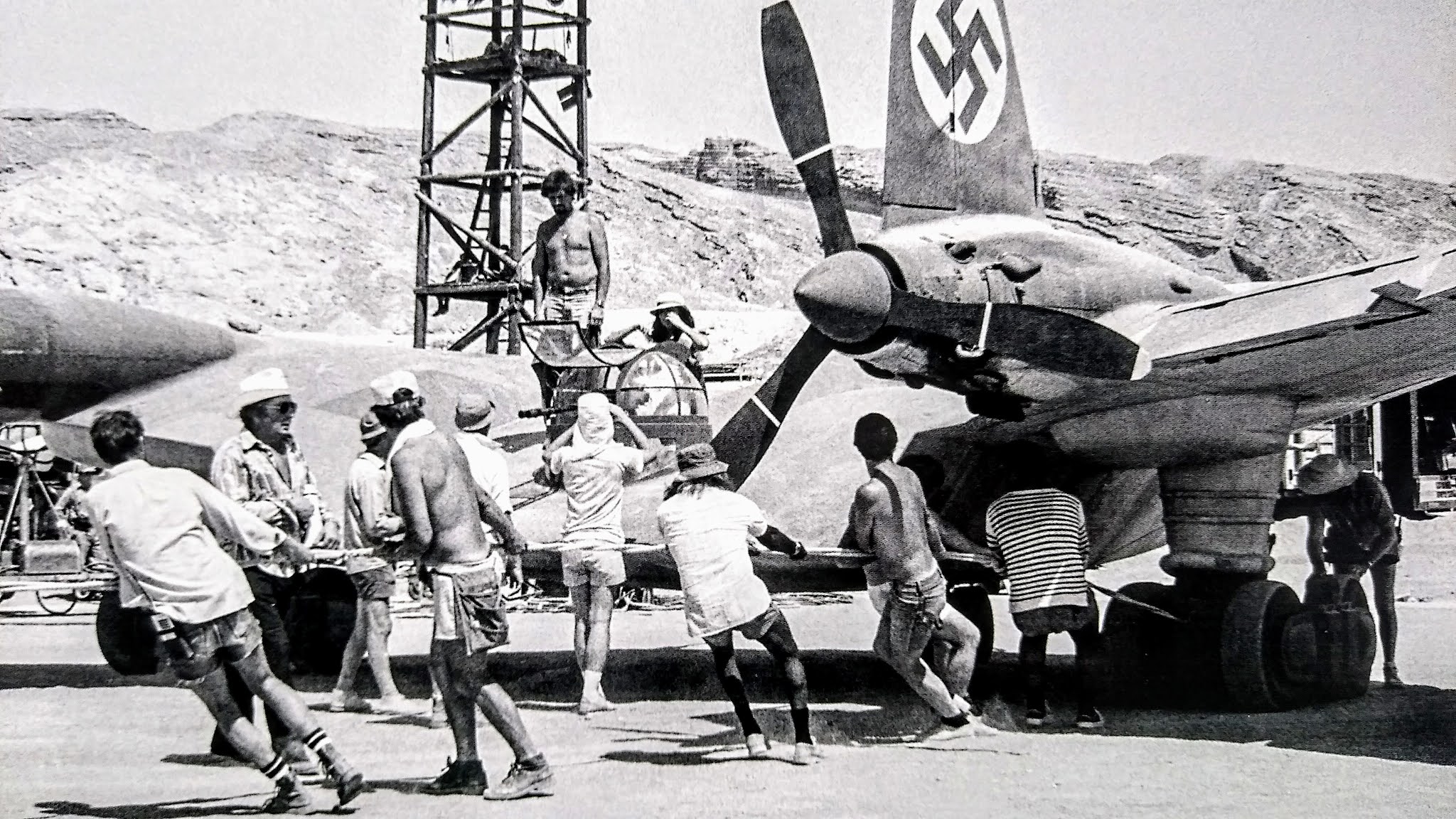 The Flying Wing scene is a memorable one in Raiders of the Lost Ark as we get to witness an exciting few minutes of action including a fight scene with Indy and a muscly German mechanic, Indy almost losing his head from a propeller all coupled with big explosions and fast-paced action.  But for Steven Spielberg the Flying Wing scene was a bit of struggle.  The prop itself didn't always perform properly and Steven had to figure out how to piece together 120 shots for the fight sequence and of course the blazingly hot temperatures on set.
But it was these hot temperatures that saved Harrison Ford from having a major disaster and a potential life-changing injury.  The wheel of the Flying Wing actually ran over Ford's leg at one point as the actor lay on the ground for a fight sequence.  Ford recalls "I go down and start to roll away - and my foot slips, right under the rolling plane's tire.  Everybody was yelling, 'Stop! Stop!' while the tire crawled up my leg.  Luckily the brakes worked - inches before my knee was crushed - but I was pinned to the sand, which resulted in tearing a ligament in my left leg.  Rather than submit to any local medical care, we just wrapped it up, put ice on it and carried on." 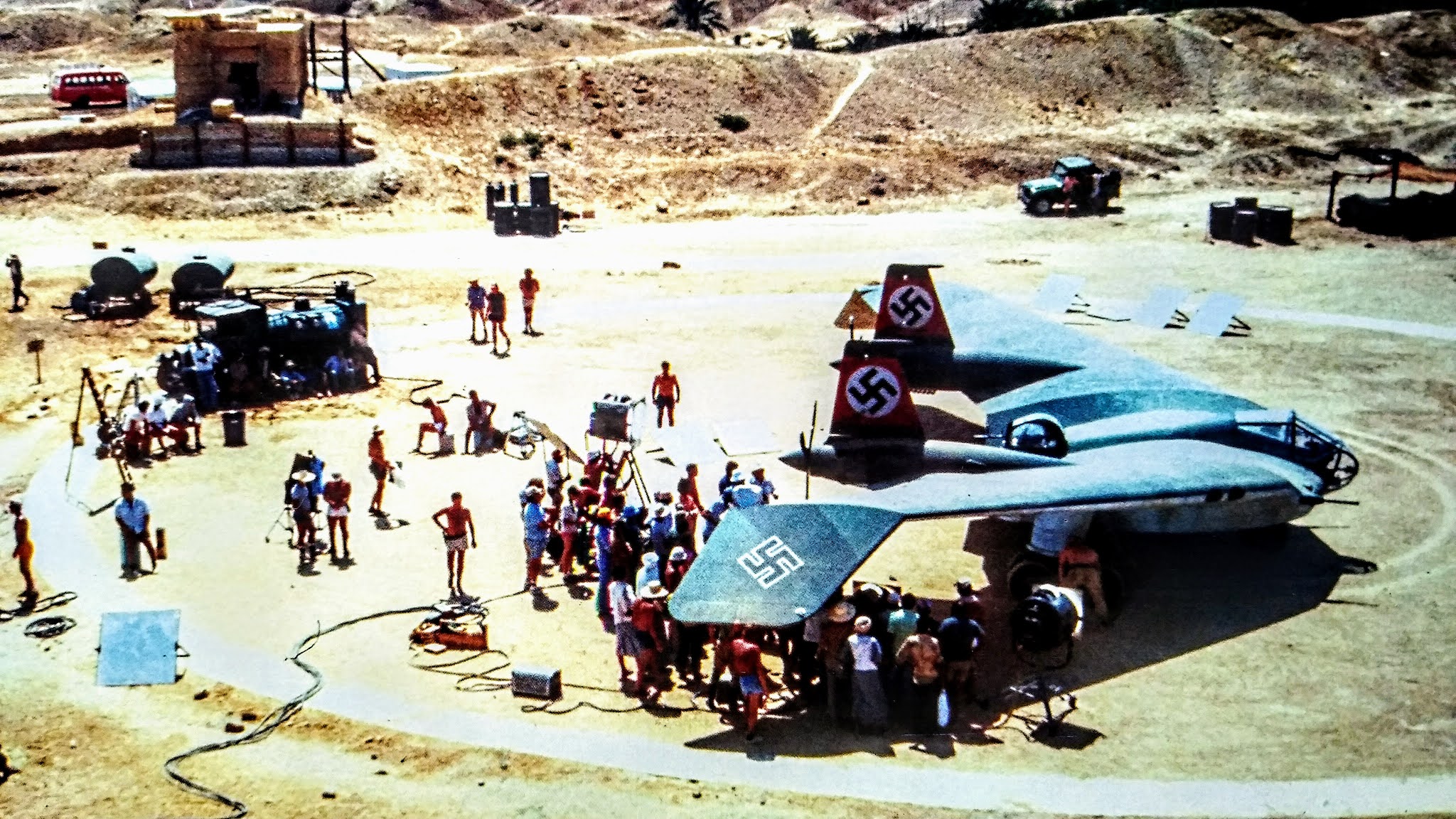 But it could have been a lot worse if that day's temperature had been any cooler.  The heat was so high on the day that it turned the plane's rubber on the wheel to a soft sticky substance so as it rolled up his leg it didn't shatter his bones.
On top of this "near miss" the cast and crew were sick.  Allen, Ford, Freeman, Rhys-Davies and a lot of the crew all became ill.  Steven Spielberg recalled the situation.  "Everybody's sick...George (Lucas) is looking more like Howard Hughes every day.  He'll be arriving with his feet in Klennex boxes soon.  You can't miss him.  He's the one with red ears.  He's terribly sunburned."
Despite all these setbacks, Steven had the scene and its many camera shots all planned thanks to preparation and improvisation.  We watch these movies over and over again and it's because of the determination, dedication, immense skill and belief in the movie that we get to enjoy these classic movies that stay with us for decades.  Thankfully the cast and crew battled through these challenging environments to bring us one of the greatest action movies of all time.  But if Harrison Ford is ever near a plane on set or off it, whatever kind it might be just be extra vigilant.
These facts and a whole lot more can be found in the excellent book "The Complete Making of Indiana Jones" by the excellent J.W. Rinzler who sadly passed away in July. 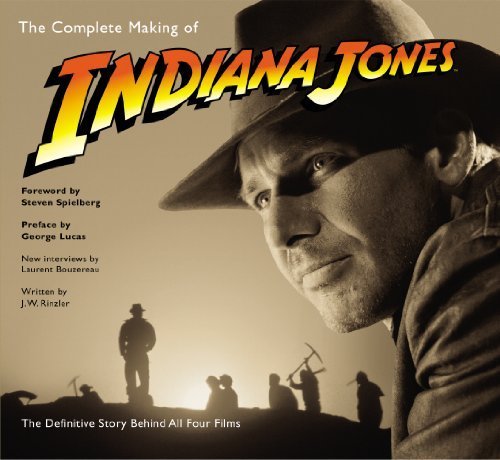