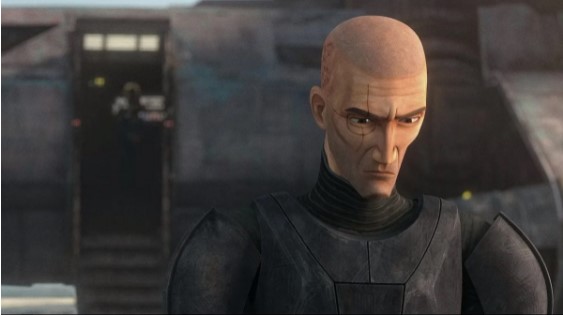 "They escaped."
That's the cynic's version of recapping what happened in Friday's Season 1 finale of Star Wars: The Bad Batch. And, well, it's not a meritless summary. But as there typically is with Star Wars, the cynic's point of view often ignores subtle nuance that gives the story and characters the guts required to resonate with an audience.
The season's penultimate episode, airing last week, left our heroes running for their lives as Imperial Star Destroyers were brutally laying waste to Kamino's Tipoca City, birthplace of all Clonetroopers over the past 13 years.
Omega, the helpful hovering droid AZ-3 and all five original members of the batch escape one perilous situation only to get into a worse one as Tipoca City crumbles under the Empire's orbital bombardment. They eventually find temporary relief in the lab they were created in. They climb into tall cylinder tubes in hopes they can bob up to the planet's watery surface.
Much of the sequences showing the destruction of the city reminded me of Titanic. Even the sounds of the sinking city structures sounded very similar to me of the broken ship, dying in agony in that 1997 film. 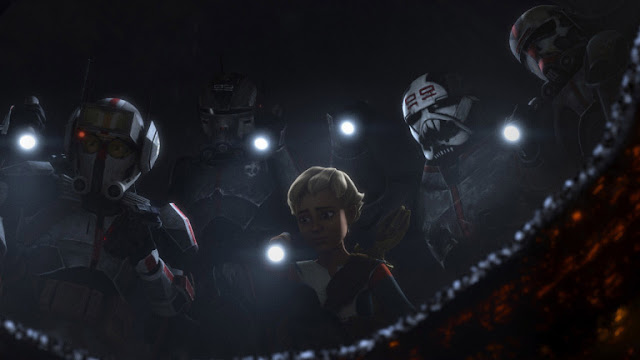 Throughout their escape from their home, Crosshair notably lags behind the rest of the group in their pace of movement. He's clearly reluctant but also conflicted about joining his comrades. It almost felt to me like he'd rather die at times. But he plays catch up with them. He and Omega take turns rescuing the other from near-certain death - Crosshair in a sealed room and Omega from near drowning trying to save AZ on their way to the surface.
On the hidden Kamino platform, housing the group's ship and only means of escape, Hunter and Crosshair have another pivotal conversation. Hunter still wants Crosshair to rejoin the group while Crosshair is clearly still bitter over being left behind back in the season's second episode. "To the Empire, you'll never be anything but a number," Hunter declares to Crosshair. Crosshair believes he has a future with the Empire. We're left with the powerful image of the Havoc Marauder taking off with Crosshair standing on the hidden platform, literally the last clone standing on Kamino, now a deserted planet. 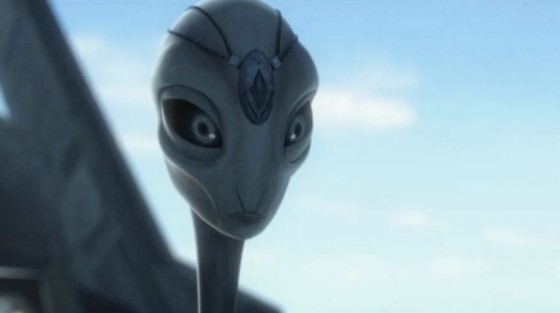 The episode concludes with Nala Se, the Kaminoan medical specialist, being escorted into an Imperial base embedded within a mountain. Clone Commandos (think Delta squad) escort the reluctant Kaminoan onto a platform where they are greeted by an Imperial scientist dressed very similar to Doctor Parshing from The Mandalorian. That doctor states the Empire has big plans for the Kaminoan scientist.
A popular take on this episode is that it might have been better served acting as the second part of one big episode rather than its own, and I tend to agree. We opened the season with an incredible 72-minute episode that saw the absolute end to The Clone Wars as we begin to follow the story of these men without a country. I would have loved to see the bookend to that be a 55-minute classic that featured death-defying chases, escapes, deep character examinations and reunions, with uncertain futures facing our heroes.
Early next week I will write up a full season summary of The Bad Batch where I will go a bit deeper on the overall themes and character movements from the newest entry by the Lucasfilm Animation Department. Kamino Lost ends on a tense and uncertain note, but effectively paves the way for a much-anticipated second season.