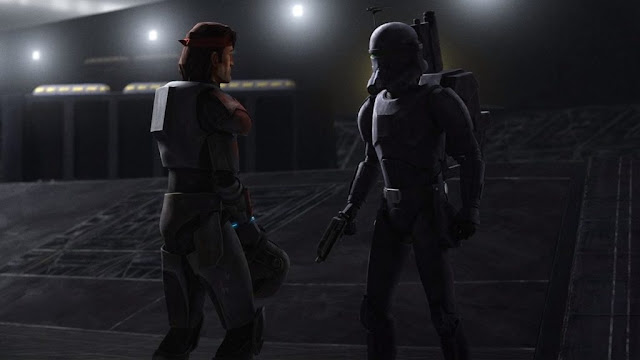 Star Wars: The Bad Batch reached a new high point for me in the penultimate episode of season 1 (yes, there will be a season 2), released Friday morning.
Return to Kamino is a heavy episode packed with action, emotion, story and character. It also leans more heavily into the show's overall theme - free will and choice - more than any other single episode to date.
We open with Hunter, captive on an Imperial shuttle, being taken to Kamino by Crosshair. Crosshair activates Hunter's comm device, which alerts the Bad Batch to Hunter's location. The group naturally follows the device, intent on executing a rescue of its leader.
Kevin Kiner smartly utilizes John Williams's musical themes for Kamino during back-to-back landing sequences early in this episode. The music played for the landing of both the Imperial shuttle and the batch's Havoc Marauder are slight variants on the music heard as Obi-Wan Kenobi lands on Kamino in Star Wars: Attack of the Clones. I adore this music, as I do that film. It balances the action of flying through bad weather with the sterile silence that permeates the beautiful interior of Kamino's Tipoca City. Kiner's music throughout the entirety of this episode was another highlight. Brilliant work. 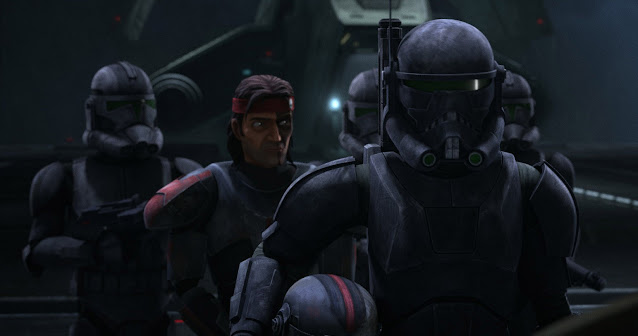 Omega leads the team to a secret landing platform, which leads to a secret underwater tunnel system that will take the team to Hunter's exact location. The aesthetics of both new locations is completely consistent with Kaminoan architecture, and the animation team carries out one of George Lucas's motifs in the prequel era. They take familiar locations and take us to new places within that location while maintaining a consistent quality and design look. A great example of this is Chancellor Palpatine's holding office in Star Wars: Revenge of the Sith.
This tunnel path leads the group to a lab, where Omega says she and the batch were initially created. This reveals a key point of origin for these unusual clones.
Meanwhile, Imperial Admiral Rampart confirms that all "key personnel" have been taken off Kamino, referring to native Kaminoans, along with, I presume, any clones the Empire chose to keep. The city is eerily quiet, as Hunter notes there are no clones to be spotted anywhere. 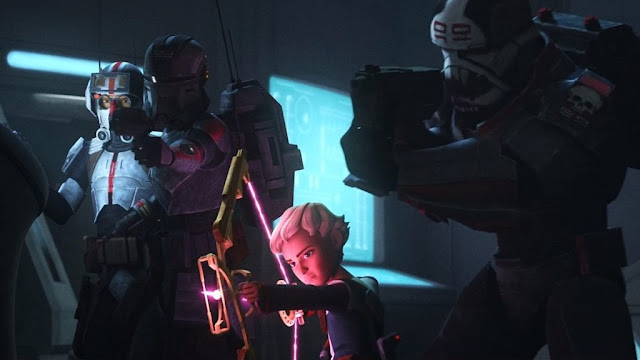 Hunter and Crosshair engage in a couple of key conversations in the latter half of this episode. Crosshair notes he doesn't want Hunter, or any member of the batch dead. Instead, he wants them to join the Empire, and join Crosshair.
Crosshair also reveals he had his inhibitor chip removed along ago, shedding new light on his actions since the first episode. Turns out all of his actions are of his own choosing, and not because he was organically programmed to follow particular orders. The theme of free choice and free will strikes you right in the face during these conversations. Does a clone have free will? If a clone removes his own inhibitor chip, does that grant him free will? This conversation shows that a simple question has a complicated answer.
Omega unlocks a legion of live-fire training battle droids in an attempt to free the batch from the Empire's custody. Turns out a lot more of them were released than she knew, forcing Crosshair and the batch to once again work as a team. I got a small Avengers feel to this scene as we finally see the original group working together as a team for the first time since the opening scenes of the first episode.
Hunter makes one last effort to bring Crosshair back into the batch's fold. When Crosshair refuses, Hunter, quick enough on the draw, stuns Crosshair.

However, while this is going on, Governor Tarkin orders Rampart to use three Venator-class Star Destroyers to open fire on Tipoca City. With Kamino now empty, it no longer serves any purpose for the Empire, and Rampart appears quite content that if any remaining clones are on Kamino during this savage bombardment, then so be it. The episode ends with the batch searching for a way out of the crumbling city.
The theme of free choice and free will is something I'll dig into more with my season recap next week. But that is on display here more than in any other episode. That, along with Crosshair being a central figure in this story, help make it my new favorite episode so far. Just one episode to go, and it figures to be a dandy.
Brad Monastiere
I live in Michigan and have been an unconditional fan of Star Wars and Indiana Jones for decades. Follow me on twitter @bmonastiere
The Bearded Trio - The Site For Steven Spielberg, George Lucas, John Williams and a whole lot more.