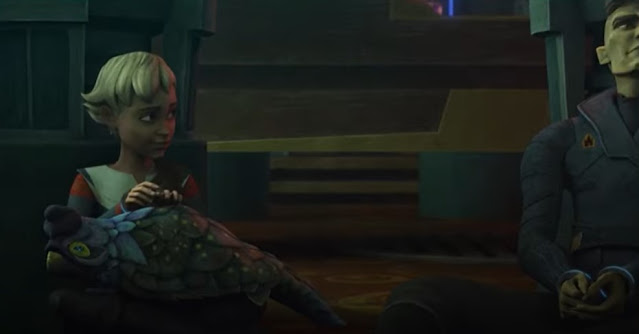 We are in the final quarter of the first season of Star Wars: The Bad Batch, and the 13th episode, Infested, opened that final quarter with a much smaller, more localized story.
The group returns to Ord Mantell to find Cid's bar has been taken over by a Devaronian named Roland Durand. His guards seem belligerent and he appears to have a soft spot for his pet named Ruby, who can only be described as a cross between an armadillo and a parrot.
Cid awaits the Batch on their ship the Havoc Marauder, and she requests their help in retaking her establishment. She reveals Roland is in the spice smuggling business with the Pykes, and reasons that if they take his spice, he will be neutralized.
The group reluctantly agrees to help, and it was nice to see Cid, to this point a detached deliverer of orders, get in the middle of the action and do some of her own work for a change. They use secret underground tunnels to access her back office to steal back six large containers of spice.
In a set piece reminiscent of Indiana Jones and the Temple of Doom, Cid and the Batch use mine cars to travel through the underground area. They are careful to be quiet, but of course fail in doing so, thus awakening a frightening flock of large insects known as the Irlings. The Irlings seem like descendants of Geonosian Warriors and are just as nasty and aggressive. The group loses the spice containers while trying to fend off the Irlings, and returns topside to help Cid reclaim her establishment from Roland. 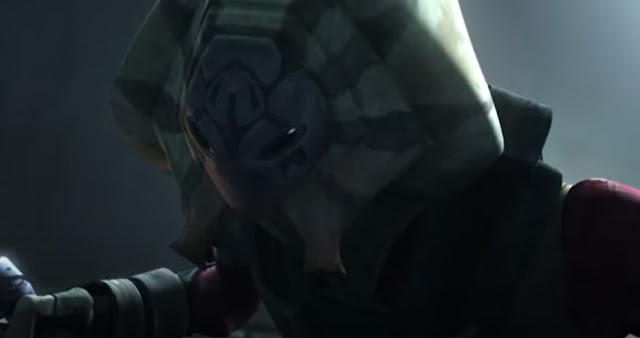 The Pykes discover Roland's spice is missing and decide to hold Roland and Omega hostage until the group retrieves the spice. Wrecker and Cid return to the underground terrace, and after weathering another swarm of Irlings, successfully get the spice containers back, with an assist from Tech. The Irlings are sensitive to light, and Tech creates a "light bomb" to help clear the way for Cid and Wrecker's escape.
The Pykes take back their spice, but not before removing one of Roland's horns as punishment for making the spice deal go bad. It was a classic call back to the trope of mafia bosses cutting off the finger of an associate who has failed them in one of their missions. 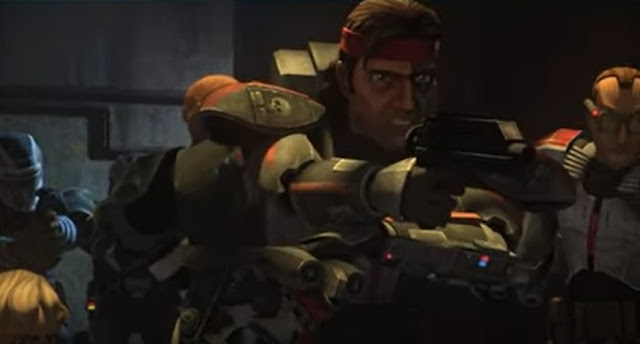 It's easy to label this episode as filler, but it achieves several things that we hadn't seen yet. We see the Batch and Cid actually working together for once, and Cid pulling her own weight to achieve an objective. It felt like there was a bit more mutual respect between Cid and the group at the end of the episode than we had seen.
Omega was a key figure on several fronts. She once again was open and willing to help Cid, and maybe a bit too trusting that assisting Roland was the right thing to do. She continues to be the conscience of the group, but I can't help but wonder if that naïve belief in others will cost her or the group dearly at some point.
I also feel the use of Wrecker's enhanced strength was an ability that had been under utilized to this point in the season. That enhanced strength is a key reason why the group's mission was successful in this episode.
Past seasons of The Clone Wars and Rebels often have a stand-alone episode like this very late ahead of memorable season finales. Will be interesting to see if the final three episodes of this season follow suit.
Brad Monastiere
I live in Michigan and have been an unconditional fan of Star Wars and Indiana Jones for decades. Follow me on twitter @bmonastiere
The Bearded Trio - The Site For Steven Spielberg, George Lucas, John Williams and a whole lot more.