I Opened Up My Star Wars Figures Collection And I Don't Regret It. Here's Why. 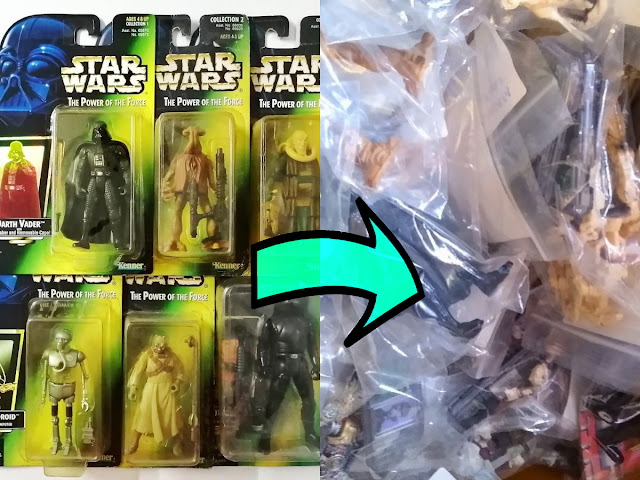 When lockdown started I decided with the extra time in the house to focus attention on my collection of action figures I have accumulated over the decades and like a lot of collectors who never stop collecting, I have amassed a great deal of merchandise which overspills into drawers and plastic crates filed neatly away in a safe dry spot (or at least I thought it was but I will get to that later.)
In our converted garage which is now joined to the house (lovingly called the "Geek Room") is where all my various toy collection resides with glass displays and fancy LED lights.  But in a corner there was a stack of crates for my, well lets just say my less loved toys (don't tell them that!)  In these crates you would have found loose and sealed Star Wars figures. Mainly Episode 1, Power of the Force, Power of the Jedi and Shadows of the Empire figures.  You see my focus was mainly retro and when I say retro I mean the 70's and early 80's Kenner stuff.  (I realise that Episode 1 is now "old" and can be classed as retro but I choose to deny that because it makes me feel old, so there!)  But a while back I had a mad few years where I would buy, buy and buy more Star Wars from where ever I can.  Car-boot sales, second-hand shops, Ebay, comic-cons you name it I was buying from there.  So I ended up with a stack overflow error quite literally and had Star Wars coming out of every drawer, box, crate and more boxes.  I even pinned them to all four walls just to give me some room.  It had got out of hand trying to hide it all so I fell out of love with my collection.  Every time I went to look at them I felt overwhelmed and not knowing what to do with it all.
It wasn't just confined to action figures.  Posters, magazines, books, badges, food packaging, cereal boxes, Pepsi cans even a plastic square advertising board that you stick on a shopping-trolley advertising Star Wars Baked Beans! (I bet Rancho Obi-Wan doesn't even have that.  If you're reading this I can send it if you want it.)  So lockdown happened and as I say I decided to tackle this ever-expanding beast starting with those pesky figures.  I made a drastic decision and it filled me with apprehension and doubt but it ultimately turned out to be so enjoyable.  I took that big step.  I opened up my figures!
For years I had these figures stored away, slowly getting bent and out of shape, showing no love for them.  So out of the crate they came and I opened the first one.  An Episode 1 figure.  The rip felt satisfying if a little unnerving.  But then I tentatively pushed the figure out of the packaging and held it in my hand.  A brand-new Star Wars figure out of the packaging and now in my hand.  I smiled.
I placed the accessory in its hand and played with the figure for a few minutes.  I was still smiling.  I still had doubts thinking "shall I keep the packaging?  At least keep the back, right?"  No!  I decided to go for broke and open them all.  Packaging be damned!  Thankfully, I had previously ordered zip bags for figures from www.vintagestarwarscollectables.co.uk, a reliable source.  I had labels and a pen so wrote on the label for each figure what year it was, what series it was from and of course the name of the figure.  This was great fun in itself.
Even the loose figures I had fun with.  Some I had no idea what or who they were or what accessory it was supposed to have.  Yes, I know I should know all their names but there are so many!  Thankfully Steve Sansweet and his excellent range of books, especially this one helped me identify them.
Holding all these figures in my hand and their accessories made me wonder why I didn't do this years ago?  Hearing the Commtech chips work for the first time was an unexpected laugh, not knowing how bad their voices were (you can watch a video I did below which was shot in April 2020.)  Holding up a slide from the movie that was included with some of the figures was also a joy to do.  Experiencing these figures as toys for the first time and not as a collectable.  Not only that I went from crates and crates to one fancy storage box with all my recently opened figures in it.  It made me feel happy that at any point I could grab this box and dip my hands into a sea of Star Wars figure.

But even after this joyful activity, there were still some I was reluctant to open.  None of these figures were mega collectable.  These are not Kenner Last 17 stuff, they are safely in that glass cabinet I mentioned with the fancy LED lights.  These are at best from 1995 onwards.  Buffed Han and Luke were there and I thought, no I don't want to open these.  So some survived the opening sacrifices and went back in the crate.
Last week that all changed when the collecting gods above either punished me or decided that none shall be left behind.  The combi-boiler that resides down the garage tucked away in the corner decided it couldn't wait any longer and had a little widdle over the floor.  Of course my crates (I know, what a stupid place to put them I hear you thinking) were underneath in what I thought were tightly sealed crates.  They were not! 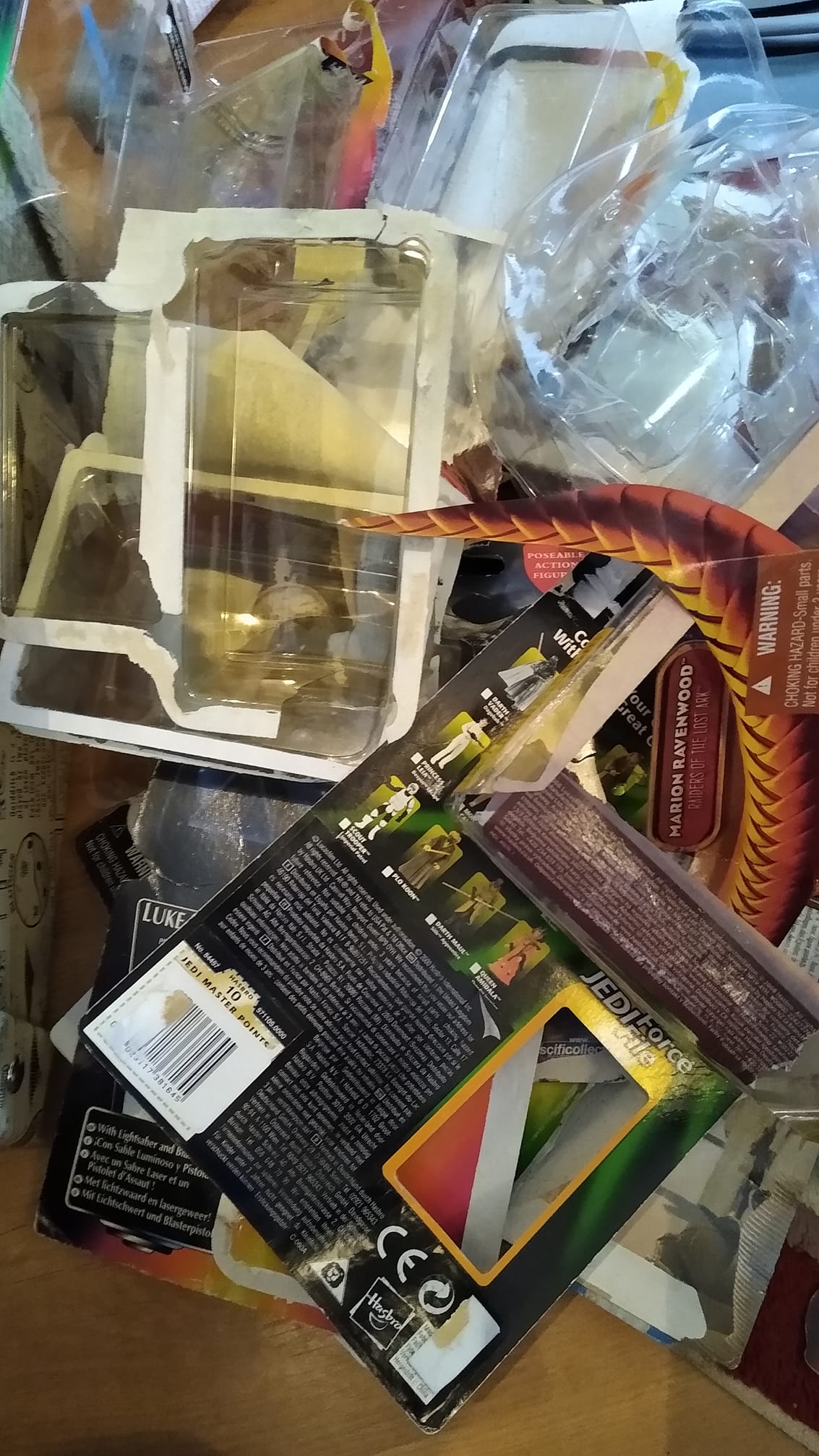 Boiler now relieved of itself it was time to check out the aftermath.  Yep!  The figures I kept back were soaked and I mean soaked.  No chance to salvage these so I opened them too.  The disappointment soon changed to joy again as I was discovering these figures for the first time.  A Jawa from the Power of the Force line with a Ronto creature was one of my highlights.  I was amazed how the Jawa's eyes lit up.  Hang on!  Does it have a battery? No, it had a clear head for the light to shine through.  Brilliant!  Such a simple thing but so effective. I would have never known about this unless I had a loose one. 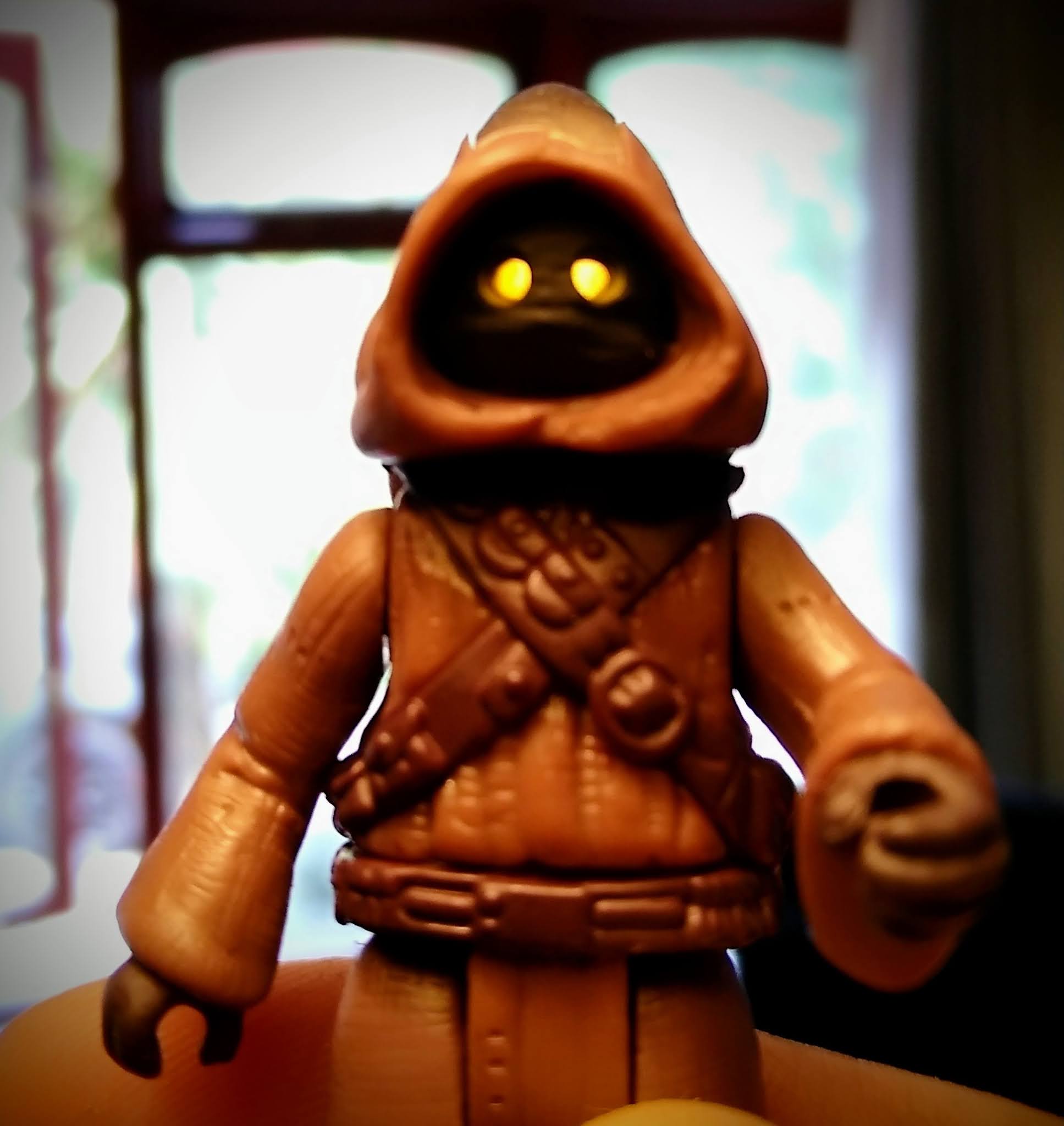 I've now opened them all up and having done this, I now have so much more space and room for more.  I know what you are thinking, "he's just going to make the same mistake he made all those years ago."  Well no because I'm now focused on loose and only loose figures.  Gone is the obsession that keeping them intact and in their boxes keeps their value up.  I was never going to sell them so what was I doing?  I kept them hidden away in case they got a mark on them but at the same time had no fun or connection with them.  Now, I want to collect all the Power of the Force and keep them in my posh storage box.
I'm not saying go and rip open all you collection today but maybe take a look at what could give you more fun.  If they're lying in crates somewhere unloved perhaps it's time to give them some love even if it means opening up about your relationship with them.
Now, what on earth do I do with all these Episode 1 Pepsi cans?
Rob Wainfur
By the way, I've opened up over 50 carded figures at the time of writing this and still going.
The Bearded Trio - The Site For Steven Spielberg, George Lucas, John Williams and a whole lot more.