Friday's episode of Star Wars: The Bad Batch, War-Mantle, is, at worst, my second-favorite of the season so far. Simply a thrilling, tense and engaging episode from the very first frame to the last frame.
The stakes are considerably higher for Clone Force 99 throughout this action-packed episode, and all is not well with our favorite group of defective clones by the episode's end.
We open with a wayward clone being pursued by uniformed troopers through a forest at night. The whole scene is strongly reminiscent of the opening of E.T. The Extra Terrestrial (1982) when government agents chase the aliens through a suburban California forest, only to leave E.T. behind when the ship escapes.
The clone is being chased by troops and Massifs, vicious dog-like creatures seen on Tatooine during Star Wars: Attack of the Clones (2002). He is eventually stunned and taken into custody, but not before leaving behind a distress call, eventually being answered by Captain Rex. 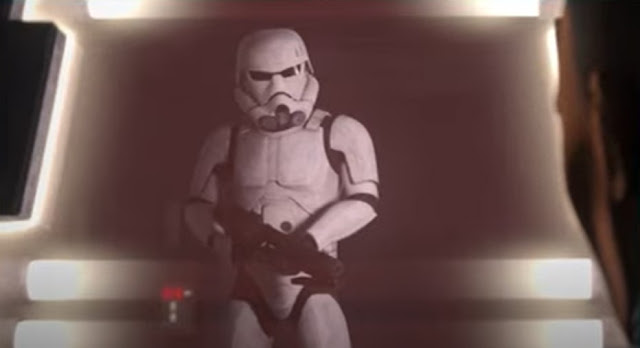 Rex contacts the Bad Batch asking for help on that planet, Daro, but doesn't detail what kind of help is needed. The group decides to ditch the job they're doing for Cid to extract the captured clone for Rex.
Echo takes a most welcome more prominent role in this episode. He's the one I have been most anxious to see develop through the season and he's largely been sidelined to a secondary role. Here, he provides the motivation for the group to rescue the captured clone, saying he was also rescued against long odds from a highly secure facility, back in Season 7 of The Clone Wars.
The group lands on Daro and makes its way to a hidden Imperial base embedded within a mountain. They gain access and break out the clone, who turns out to be Clone Commando Gregor. He was last seen in Season 5 of The Clone Wars, where he was presumed dead in an explosion. He later shows up with aged versions of Rex and Wolffe in Star Wars: Rebels in that show's Season 2 premier.
The group attempts to escape with Gregor from squads of troopers that appear to have modified armor from what we've seen from all-white Phase II clonetroopers. These aren't full-blown stormtroopers, but their helmets and armor represent a kind of hybrid mix of the two. The helmets in particular, are reminiscent of Ralph McQuarrie's initial design of the stormtroopers for Star Wars: A New Hope (1977).
Another classic call-back comes in the form of Kevin Kiner's music during the escape from the Imperial facility. References John Williams's track "Shootout in the Cell Bay" can clearly be heard throughout this sequence. 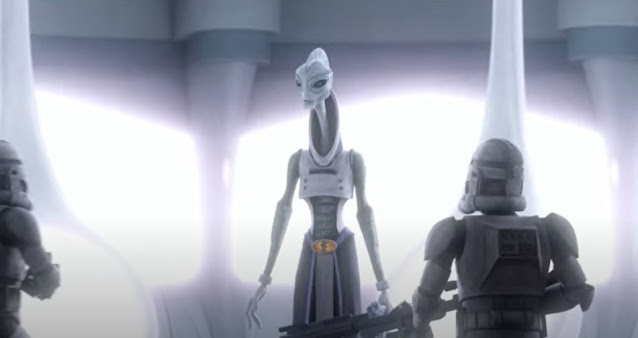 We also spend lots of time on Kamino in this episode, where affairs are changing rapidly. Prime Minister Lama Su and Medical Officer Nula Se take steps to ensure their own, and the clones' survival by making plans to get them off the planet. The Empire has canceled all contracts with the Kaminoan cloners, and they see the writing on the wall. However, Nula Se is captured by Admiral Rampart and Elite Squad members for attempting to flee. Rampart says the Empire has needs for scientists like Se, but orders two Elite Squad troops into Lama Su's office. The door closes, and although the assumption is that Lama Su is assassinated, no blaster shots are heard behind the closed door.
Back on Daro, Wrecker and Omega pilot the Havoc Marauder to extract Gregor and the group from the Imperial base. They need multiple passes and successfully pick up everyone except for Hunter, who takes a nasty fall into the forest when attempting to jump to safety. Hunter orders the ship to leave him there, saying he will find another way out. Hunter is then captured by the Imperial contingent on the planet.
The episode ends with Hunter in his jail cell, and is confronted by Crosshair, their fate and conversation left up in the air for next week.
This was an incredibly strong episode. It was established in Star Wars: Rebels that the Empire cleansed and exterminated the planet Geonosis once it had no more use for the planet's natives for its projects, and I can see the same fate awaiting Kamino. The final two episodes of the season figure to link strongly with this one to create an exciting conclusion to this season.