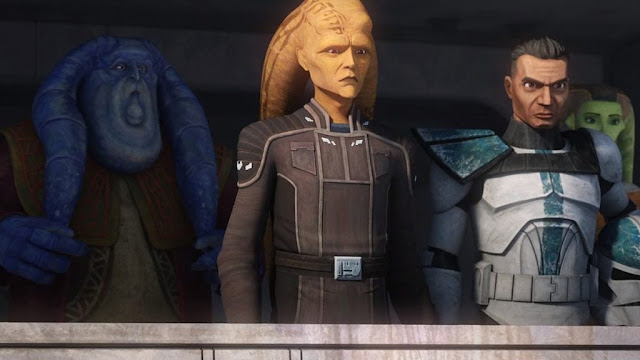 What if there was an episode of Star Wars: The Bad Batch where the Bad Batch was on screen for...one minute? Such was the case in the 11th episode of this season, Devil's Deal, which premiered on Friday, July 9.
Several of this season's episodes have fallen into a pattern of one member of the group needing rescue by another on a mission from Cid. Devil's Deal breaks up that pattern in a fascinating way, with 98 percent of the episode focused away from the members of the Bad Batch themselves.
Similar to last week, we open on a planet featured in The Clone Wars, Ryloth, which unlike last week, was a planet that stayed loyal to the Republic throughout the three-year conflict. We see Cham Syndulla - father of Hera and considered a charismatic leader on the planet - addressing a restless crowd, assuring it that peace will be in the future with the conclusion of The Clone Wars.
Ryloth senator Orn Free Taa is also prominently featured, and his assurances are met with much more skepticism.
We then cut to a high ridge, where we see Hera Syndulla, a star of Star Wars: Rebels. Only here, she is shown at a much younger age, I'm guessing somewhere in the 13-14 year old range. She is accompanied by Chopper, the temperamental droid also strongly featured in Rebels and voiced by showrunner Dave Filoni. 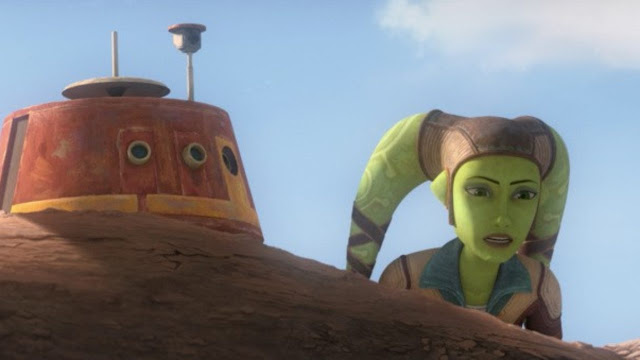 Hera and Chopper are caught in a newly designated restricted area of the planet, but Clone Captain Hauser cuts her a break and decides not to report her, out of loyalty to Cham. This indicates Hauser was unlikely to be as strongly affected by Order 66 and his inhibitor chip as most other clones were.
One of the conditions of Ryloth's integration into the Empire is the surrender of its small arms. Cham isn't sold on this plan, so in secret, he dispatches his wife Eleni and Hera to a moon to collect a cache of weapons from an unknown source. Turns out that source is the Bad Batch, and the go-between was Cid. The batch arrives at the meeting point with a pair of large cases of weapons.

Hera and Omega, seemingly bored with the transaction, find one another and immediately bond, as Omega offers Hera a tour of the groups' ship the Havoc Marauder. This key sequence offers many possibilities for the future, as we see two main characters from different animated shows spending some time together.
Back on Ryloth, Imperial Governor Rampart, in an effort to more aggressively subjugate the planet, frames Cham for an assassination attempt on Senator Taa. The shot is taken by Crosshair, who is lurking in the shadows throughout the episode. The event appears to kill Taa, though it is later defined by Rampart as an assassination attempt. Taa is carried out on a stretcher, but it seems a bit unclear whether Taa is actually dead.
Taa is featured in the novel Lords of the Sith, a novel set about five years after the conclusion of the Clone Wars, so if this episode were to remain consistent with established canon, Taa would be alive.

The episode concludes in such a way that is easy to believe this is the first of a two-part mini-arc. We're starting to get into the final quarter of the season, so I expect some of the more key threads that will be present in the season finale to start revealing themselves from this point forward.
Brad Monastiere
I live in Michigan and have been an unconditional fan of Star Wars and Indiana Jones for decades. Follow me on twitter @bmonastiere
The Bearded Trio - The Site For Steven Spielberg, George Lucas, John Williams and a whole lot more.