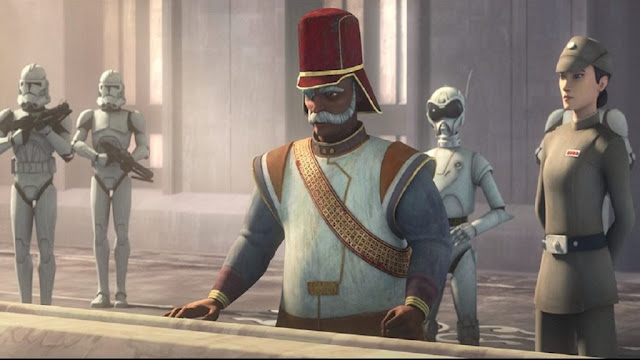 The latest episode of Star Wars: The Bad Batch saw the crew return to the mission-of-the-week format, taking a break from the overall grander story involving Kamino, Crosshair and the like.
We open with a sequence I was really happy to see. Imperial bureaucrat Captain Bragg is addressing a crowd gathered on the Separatist capital world of Raxus. She brings forward the world's senator, Avi Singh, to address the crowd and encourage loyalty to the new Empire. Singh is clearly conflicted and ultimately decides to encourage his people to reject the empire. He is then whisked away by the contingent of clonetroopers while AT-TE Walkers intimidate the crowd into complying. He instructs his droid to follow instructions.
Those instructions bring us to the Bad Batch. A message is dispatched to Cid to start a rescue operation. She instructs the group to go to Raxus to extract Singh from Imperial custody. Hunter decides this mission is too dangerous to bring Omega along, and has Cid watch over her as the group heads out to Raxus. 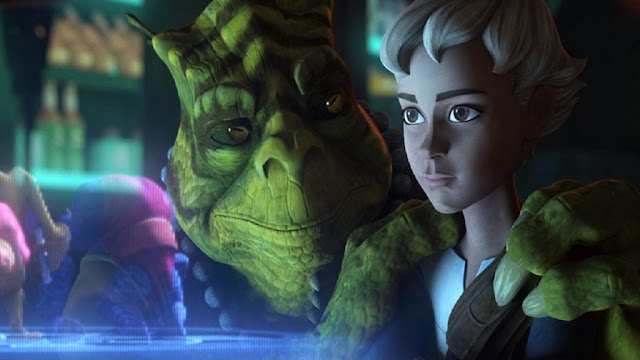 Omega is frustrated at being left behind. She impresses Cid by pointing out strategic moves during a game of Dejarik. We then get a callback to the film Rain Man, as Cid uses Omega's ability to apply sound strategic tactics to win one game of Dejarik after another, winning considerable sums of money. Turns out, enough money to get the Bad Batch out from the dubious debt Cid claims they owe her.
Back on Raxus, the group successfully executes its extraction of the Separatist senator. It's a case of the-enemy-of-my-enemy-is-my-friend, with clones coming to the rescue of a high-ranking Separatist official. It's interesting to note the Batch still refuses to use live fire in shootouts with the clones. Their weapons remain set to stun, as we've seen all season.

The planet Raxus provides another connection back to The Clone Wars. This planet was last seen in Season 3 in 2010-11, and was a location in the Clone Wars canon novel Dark Disciple (2015). Ahsoka finds, yes, common ground, with the Bonteri family on Raxus in the Clone Wars episode Heroes on Both Sides. Once again, the animation quality and detail were off the charts in this episode.
For my money, this might have been my least-favorite episode of the season. The infamous "filler" label could be accurately applied to this episode, but Dave Filoni and his crew have more than earned the benefit of the doubt when it comes to the future value of episodes just like this one.
Brad Monastiere
I live in Michigan and have been an unconditional fan of Star Wars and Indiana Jones for decades. Follow me on twitter @bmonastiere
The Bearded Trio - The Site For Steven Spielberg, George Lucas, John Williams and a whole lot more.