Why We Should Be Excited For Indy V 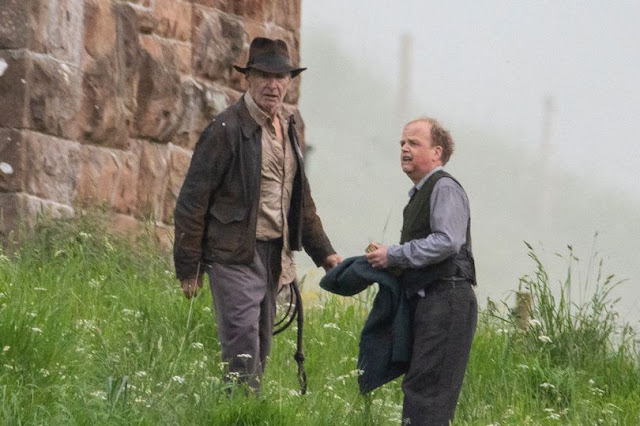 Indiana Jones V and Why We Should Look Forward To It...

I am excited for Indy V.  I know it's not directed by Steven Spielberg but hear me out.  It's an adventure movie that is heading for the big screen, that's a tick in my books.  It has Indiana Jones in it, that's another tick.  It has Toby Jones and he's a great actor (watch The Detectorists TV show to see what I mean.)  The movie is in good hands, I have faith in the director.
I'm not one that likes everything, honestly I'm not and I'm not being paid to write this or expecting freebies but I think an Indiana Jones movie on the big screen is exactly what we need right now or even just to look forward to.
Some had issues with Indy IV and I can see why (I liked it...I'm not convincing you that I like everything that comes my way...Honest!)  But I genuinely did enjoy Indy IV.  It has flaws but it was still good fun for a couple of hours but then I look at it like this...Let me talk Star Trek for a bit (hear me out, it is relevant.) I like Star Trek The Next Generation and even the worst episodes I have watched more than once just because it's set in the world I've invested in and want to be part of.  (Yes, I've watched Sub Rosa more than once for all you Trek fans.)
What I'm saying is, give the movie a chance and lets look forward to a movie that is going to have Indiana Jones, regardless of age and whether he's going to be centre stage.  You never know, this may just be the Indiana Jones movie we've all been waiting for and if not then it's still two hours of Indiana Jones and a talking point.  Give it a chance and lets all have fun.  I actually think it's going to be great.
Also...More John Williams!!! - Rob
UPDATE
These wonderful comments were posted on our Facebook page and I just had to share.  The first one is from David Gawne:
After getting the new 4K boxset I watched all four movies last week. It was great to be reminded of why I love this franchise. Not only do they look amazing with some of the F/X clean ups (and it's not revisionism as some have said as unless you really look you can't tell the difference) but the movies remain four of the most joyfully exuberant and likeable pictures ever made. And I say FOUR as I'm sick of hearing the old "you get three movies and a coaster" snarky comment. I have always supported Crystal Skull since release and I honestly believe the movie gets better with every viewing. The opening 20 mins are an absolute blast. The action is clean and Spielberg shoots and edits with a precision you just don't get from a lot of big movies. People call it out for being goofy but that's in the DNA of the franchise. It's a tribute to the 50s B-movies in the same way Raiders is a tribute to the jungle and sand adventure serials of the 30s. I don't even mind the fridge sequence as there are plenty of things in the previous movies that play the same way and stretch credibility, again, it's in the DNA of the franchise. I watched a lot of videos over the weekend regarding the whole Mangold/Twitter debacle and everyone referred to Crystal Skull as a terrible movie and look, it's definitely my fourth favourite Indy movie so I'm not saying it's some misunderstood masterpiece but i believe if more people gave it a chance it would get a little more respect.
I cannot wait for Indy 5 and don't see any reason why it can't be as good as the previous movies.
I really hate modern day movie culture that only seems to exist to tear down and mock just to get views on YouTube.
Another great comment from Lynda Crane:
I think people need a pick me up movie after the last 18 months. Indiana Jones could quite literally be just what the doctor ordered.
I was helping run a Trek convention back in ‘97. Some of the last attendees wanted to watch one last episode of TNG before they left. Any episode.  So I put a copy of, ‘The Bonding,’ on for them. The joke was on me, as one of my colleagues locked me in the viewing room.
Oh! The inhumanity!  I needed 50cc of Bacardi fed intravenously to me, when I was let out!
John Sutton on Indy IV:
I re-watched the whole quadrilogy this past week, and the more times I've seen Crystal Skull (at about four or five times now), I enjoy it more and more, flaws and all.
Joseph Durfee is looking forward to Indy V
Totally agree with everything you said. I am looking forward to Indy V very much especially after the last year and a half of misery. I think it could be tons of fun and it could have an amazing plot.
Indiana Jones V is scheduled for release 28th July 2022.
The Bearded Trio - The Site For Steven Spielberg, George Lucas, John Williams and a whole lot more.