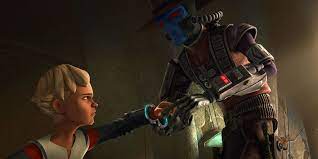 The first episode of the second half of the first season of Star Wars: The Bad Batch quickly resolves a cliffhanger from the last episode of the first half of the season.
This episode, titled Bounty Lost, centers on Omega more than any other of the season, and creates some intriguing storylines for the show moving forward. It is also a direct continuation of last week's episode, perhaps more than any two sets of episodes in the season to date.
The episode opens in space with a chase between Crosshair, still sporting bandages from damage he took last week, and the Batch's ship the Havoc Marauder. The group escapes a frustrated Crosshair as it intensifies its search for the abducted Omega. 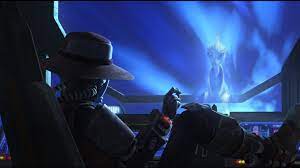 Omega is in the custody of notorious bounty hunter Cad Bane with his droid sidekick TODO-360, voiced by Seth Green. We discover Bane was under the employ of Kamino's prime minster Lama Su, who intends to get Omega back to Kamino so more of her DNA can be harvested before she is terminated.
It is also revealed that Omega is the same type of clone as Boba Fett - one with no growth acceleration or alterations to her DNA (aside from the gender modification). This makes Omega and Boba Fett genetic twins, bringing up another recurring theme in Star Wars of not only twins, but the concept of duality. Boba, who we discover was originally code-named Alpha, was mentioned by name, which to me, is a strong indicator we'll see him at some point in this series.
Cad Bane agrees to meet up with Taun We on an abandoned Kaminoan outpost to deliver Omega. Omega eventually escapes from her cell, in a ruse played on TODO to unlock the energy cage. A chase ensues on the outpost with another familiar figure entering the fray. 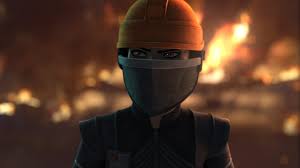 Fennec Shand returns, also in pursuit of Omega, but for entirely different reasons. Shand kills Taun We and offers the cash bounty to Bane in exchange for Omega. The exchange is naturally botched when Shand kicks an explosive at the suitcase containing the cash. Shand and Bane square off both in a gunfight and in hand-to-hand combat, with neither gaining a significant advantage over the other. Omega eventually escapes the fray and is rescued by the Batch.
In another twist, Shand reports back to another frequently seen Kaminoan, Nalla Se, and it's revealed that Shand is working as a bounty hunter not to capture or terminate Omega, but to protect her. We have dueling Kaminoans betraying one another, without the others' knowledge, while in pursuit of the same target. 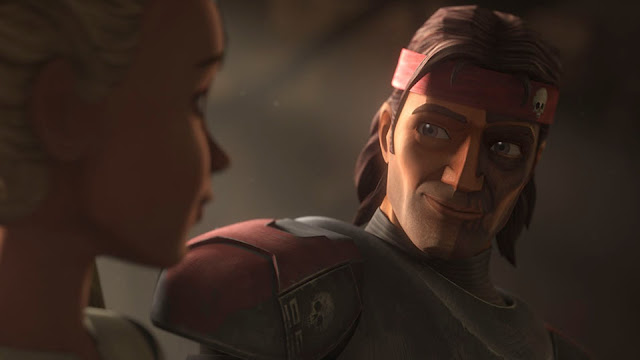 Every week I bring up how good the lighting, animation and detail is in this show but it is worth mentioning again. The quality of some of the effects are obvious, like the landscapes of Ord Mantell. Others, like in this episode, are quite subtle, but beautiful. The work cinematographer Joel Aron and his team do is a 10/10 every single week and deserves endless praise.
Omega's role in the series took on greater purpose and importance with this episode. Her link to other established characters and events in the Galaxy Far Far Away is much stronger now, and the stakes that involve her and her would-be captors or protectors have been raised.
The future of the show's first season feels wide open now. Up to this point, some of the story elements were not difficult to predict. But now that Omega is back in with her crew, and the Kaminoans' dual duplicity revealed, there are any number of directions the story could go over the final seven episodes of the season, and I can't wait to see where the ride takes us.
Brad Monastiere
I live in Michigan and have been an unconditional fan of Star Wars and Indiana Jones for decades. Follow me on twitter @bmonastiere
The Bearded Trio - The Site For Steven Spielberg, George Lucas, John Williams and a whole lot more.