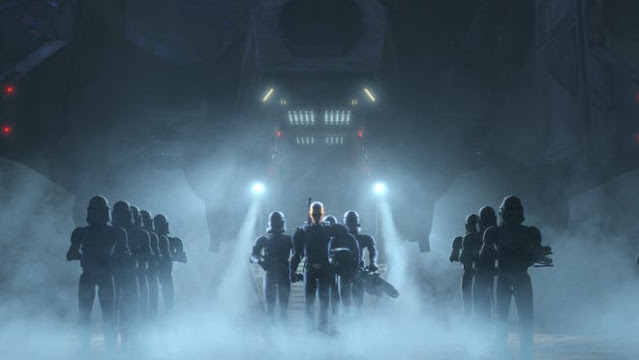 We are now at the halfway mark of the first season of Star Wars: The Bad Batch, and Friday's episode, Reunion, plotted a whole new course for the season going forward.
Up until now, we followed the five members of the Bad Batch - Hunter, Wrecker, Tech, Echo and Omega - on their path from Republic soldiers to struggling mercenaries who work for very little in order to just get by. The overriding plot point of the first seven episodes of the season was the group - clonetroopers from the Republic - breaking free of their inhibitor chips while staying off the radar of the newly formed Empire.
Reunion introduces an impactful new but old character, and raises the stakes for the group in a new and compelling way.
We open by returning to Kamino, a place we haven't seen since episode 3. Imperial Admiral Rampart directs Crosshair, now an agent of the Empire, to take out the Bad Batch after their location was reported by Bracca's Scrapper Guild. 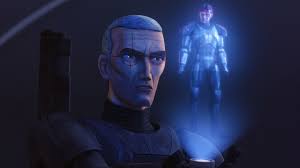 Back on Bracca, Echo, Wrecker and Omega realize they have been spotted by members of the guild They subdue the three guild members and plot their escape. But they also realize the derelict Republic cruisers that are scattered all over Bracca are a goldmine of resources that can help them get out from under the thumb of Cid, who has been sending them on various jobs and ripping them off in the process.
The group gathers weapons and supplies, but they are too late. A squad of gray-clad Elite Squad Troopers, led by Crosshair, has landed on the planet and is pursuing the group.
Crosshair is a former member of the Bad Batch, but has since thrown in with the Empire, undergoing enhancements to his inhibitor chip to make him even more menacing and willing to carry out orders.
A firefight ensues, with the Batch finding temporary refuge in the ship's ion engine reactor. Elite Squad members activate the engine in an effort to destroy the Batch, but the Batch is a step ahead. They place charges around the edge of the reactor, causing it to separate and explode when it is activated. The ion blast hits Crosshair full-on, and he is clearly injured in the blast. 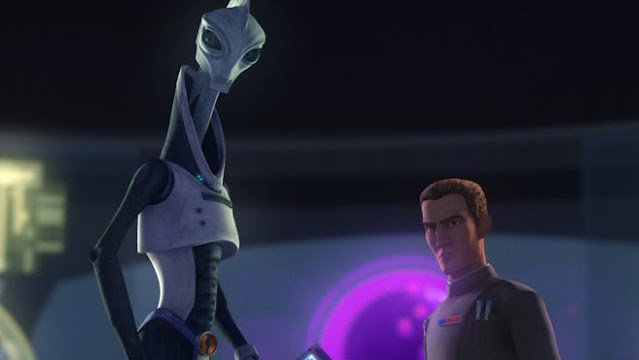 Hunter and Omega, who got separated from the others, regroup to try to get back to the Batch's ship, the Havoc Marauder, in hopes of escaping Bracca. However, they are intercepted by none other than Cad Bane, a bounty hunter who was first introduced in Star Wars: The Clone Wars.
Bane was a thorn in the side of the Jedi throughout The Clone Wars, and was last season in that show's fourth season back in 2012. This episode marks his first canon appearance since then. He bests Hunter in a duel and stuns Omega, kidnapping her on behalf of (we presume) the Kaminoans.
Hunter, while shot, survives and escapes onto the Marauder with other members of the Batch. They discover Omega is missing and Wrecker declares that they must find her. 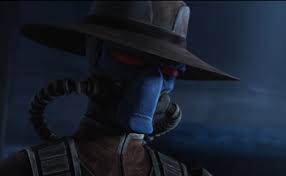 The direction of the second half of season one of The Bad Batch is now established. The Bad Batch is intent on locating and retrieving Omega from Cad Bane's clutches. There is a brief scene earlier in the show where Nulla Sa, one of the Kaminoans, references utilizing "the bounty hunter" to get Omega so their contingency plan can remain intact. We know Omega is a clone, the first of her kind, and she must represent a key part of that contingency plan the Kaminoans refer to. I assume the Kaminoans believe the Empire will eventually attempt to wipe them out, since clones are being phased out of the Empire's plans for an active military presence in the galaxy.
The kidnapping of Omega has echoes of The Tragedy, one of the best episodes of The Mandalorian, where Grogu is captured by the Empire's Dark Troopers. In both instances, the innocent youth is taken by an armed military force it has no chance to fight back against, and those that innocent cares for are now motivated to get them back.
The Bad Batch until now, was motivated by escape and survival. The group is now motivated to get back one of its own, its most vulnerable, from a deadly and unforgiving Empire.
Brad Monastiere
I live in Michigan and have been an unconditional fan of Star Wars and Indiana Jones for decades. Follow me on twitter @bmonastiere
The Bearded Trio - The Site For Steven Spielberg, George Lucas, John Williams and a whole lot more.