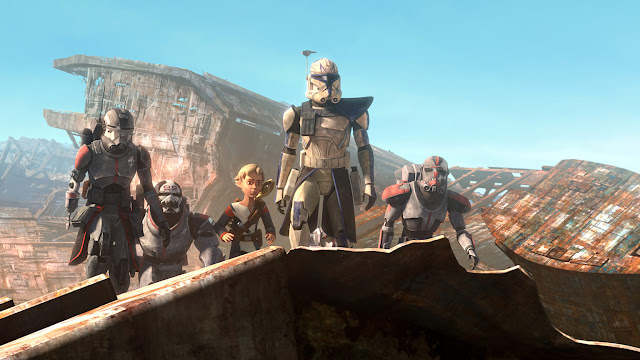 Friday's episode of Star Wars: The Bad Batch, "Battle Scars," to me, is the strongest episode since the season premier last month. We are reintroduced to an old friend, visit a new but familiar location and a long-simmering plot line finds resolution.
The episode opens with the group flying the Havoc Marauder on the run from attacking ships, having just completed an off-screen mission to obtain an alien lizard. Echo fixes the hyperdrive and the ship escapes back to its home base and Cid.
They deliver the lizard to Cid, who pays Hunter a fraction of what he believes Cid owes them. Hunter expresses frustration over how small their payment is while Wrecker and Omega escape to indulge in their end-of-mission tradition - enjoying what can only be described as "space popcorn."

While in Cid's cantina, the group is spied upon by a mysterious figure in a hood. It is revealed to be none other than Captain Rex, who tracked the group down via the Martez sisters, seen in last week's episode. Rex is known to the group, having worked together during Season 7 of The Clone Wars.
Rex immediately addresses the issue that's been percolating throughout the season - inhibitor chips installed in the clones' brains. The issue has mainly been focused on Wrecker, who has experienced headaches throughout each episode of the season. Rex tells the group it is vitally important to get the chips removed, and has an idea of how to do it. The group, led by Hunter, expresses no reservations about agreeing and they join Rex on a trip to Bracca.
Bracca is the planet we see at the very beginning of the video game Jedi Fallen Order (2019). It is a planet that is full of dead and destroyed starships. Rex and the group land on the planet several years before we see it in the video game, but there are still plenty of dead ships visible. Rex says the best place to do the inhibitor chip removal surgery is a medial suite on one of the Republic's Venator cruisers, which is where Rex had his removed at the end of Season 7 of The Clone Wars. 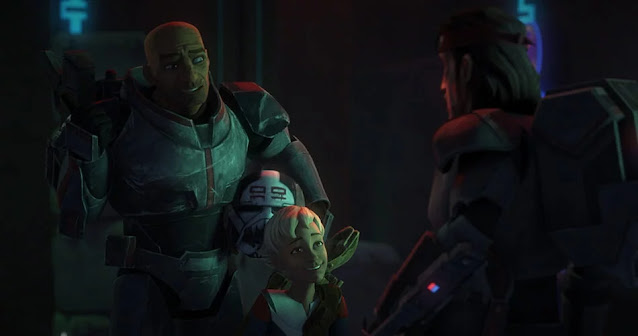 Tech begins the procedure by scanning Wrecker's head, at which point his chip appears to fully activate. Wrecker's mood deteriorates until the chip becomes active, at which point he brutally attacks the rest of the crew. One of Order 66's provisions is that any clone not obeying the order is to be executed, and this is what Wrecker is acting on. He easily bests other members of the crew and then stalks after Omega, who has tried to hide in the ship's shadows. Despite Omega's pleas, Wrecker seems to show no hesitation at stomping after the youthful and frightened Omega. Wrecker is finally stopped by Rex who blasts him with a stun bolt from behind.
The procedure is then conducted on Wrecker, who takes a little extra time to recover. His chip is successfully removed, though he is aware of his attack on Omega and immediately expresses remorse. She expresses forgiveness by sharing more of her space popcorn with him, as this mission has been completed. 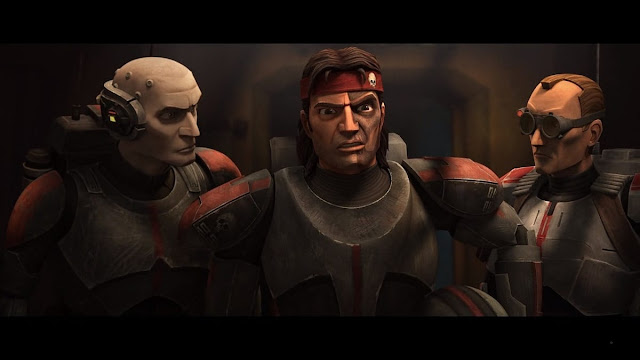 The rest of the crew have their chips successfully removed as Rex says goodbye, but not before checking in with an unknown person, stating he will meet this individual at a certain rendezvous point. As Rex says goodbye to Hunter, we switch points of view to members of Bracca's Scrapper Guild, who spot the clones and say they have to report their presence to the empire.
The scene of Omega and Wrecker after the latter's surgery was reminiscent to me of a scene from Indiana Jones and the Temple of Doom (1984), when Indy was under the spell of the Kali and attacked his young friend Short Round. Shorty then hits Indy with a lit torch, curing him of the spell. Indy, being aware of what he had done, issues an emotional apology to Shorty, who hugs his friend and forgives him.
As with every episode through the season, the animation and detail are simply off the charts. The water animation on the wrecked Republic cruiser in particular, is indistinguishable from actual water.
The introduction of Rex, while anticipated, was still a sight that made me smile. You just know Rex is savvy enough to reconnect with the Bad Batch crew, and his timing was impeccable, having successfully guided the group to the removal of the inhibitor chips, which was an ongoing threat.
Wrecker's chip being activated had also been strongly hinted at throughout the season so far. A bloodthirsty Wrecker was a fearful idea, and we saw it come to fruition, even if for a brief moment in time.
This felt like the conclusion of an overall storyline that had been set up from the season premier, although next week's eighth episode marks the actual halfway point of this 16-episode season. There was great action, emotion and resolution in this week's episode, which ranks as my second-favorite of The Bad Batch so far.
Brad Monastiere
I live in Michigan and have been an unconditional fan of Star Wars and Indiana Jones for decades. Follow me on twitter @bmonastiere
The Bearded Trio - The Site For Steven Spielberg, George Lucas, John Williams and a whole lot more.