We are now one-third of the way through the first season of Star Wars: The Bad Batch, and the sixth episode, Decommissioned, continues to expand the scope of familiar characters in this universe the Bad Batch encounter, for better or worse.
The episode opens as the group is given another job by Cid, the Trandoshian we met in last week's episode. She has them traveling to Corellia to retrieve a tactical droid, a droid featured prominently throughout The Clone Wars. Tactical droids were used by the Separatists to devise war theater strategy against the Republic army throughout the duration of the war. Their droid brains still contained valuable information.
Turns out, the Bad Batch aren't the only ones after this tactical droid. They travel to a factory on Corellia where Separatist droids are being melted down for scrap, carrying out Emperor Palpatine's command shortly after the implementation of Order 66.
The factory is populated with police droids, but two others, dressed similar to those droids, quickly get in the way of the Bad Batch's efforts to get the tactical droid.
Turns out the other two are Rafa and Trace Martez, sisters we first met in season 7 of the Clone Wars. They, along with Ahsoka Tano, were the central figures in that season's middle arc. 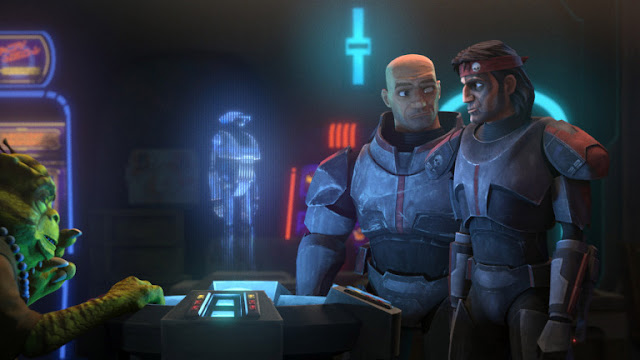 Furious action ensues, as the Bad Batch and the Martez sisters exchange gaining, then losing the droid head while being shot at by the ineffective factory police droids. During the melee, Wrecker rappels from one platform to another, and of course, hits his head on the landing. As he is recovering, he mutters those fateful lines "good soldiers follow orders," the same lines said by Tup when his inhibitor chip activated back in Season 6 of The Clone Wars, right before he assassinated a Jedi general. Crosshair also said these same words upon leaving the Bad Batch in the show's premier. This marks another bit of foreshadowing to the possibility Wrecker's chip could be activated, via multiple blows to the head, leading to a pretty significant fracture in the group. This event's foreshadowing has been hinted at through each of this season's episodes, and promises to be an emotional and traumatic event in the lives of the characters.
Eventually, the tactical droid head is lost to both parties as they work together to escape the factory. Tech engineers a cylinder device that replicates the information inside the droid's head and Hunter presents it to the sisters as they part ways.
The sisters then report back to a hologram - a "he" based on the dialogue - saying they located the group. It was not revealed who this person was. Are the Martez sisters trying to bring the Bad Batch into a greater rebellious organization? Or are they in contact with someone else, selling out the group? That was not made clear.
I was not a fan of the Martez sisters arc in The Clone Wars. I found their characters to be annoying and unlikeable. I was actually encouraged to see them pop up here, because it's a chance to integrate them into a larger story, something Dave Filoni and his crew are vert adept at doing.
Brad Monastiere
I live in Michigan and have been an unconditional fan of Star Wars and Indiana Jones for decades. Follow me on twitter @bmonastiere
The Bearded Trio - The Site For Steven Spielberg, George Lucas, John Williams and a whole lot more.