The latest Star Wars project to hit Disney Plus is The Bad Batch, bowing on, of course, May the 4th. The show is slated for 16 episodes in its first season and comes from the same Lucasfilm Animation creative team that created The Clone Wars and Star Wars: Rebels.
The Bad Batch centers on the adventures of five genetically enhanced clonetroopers we first met in the final season of The Clone Wars: Hunter, Crosshair, Wrecker, Tech and Echo. The only familiar character in the bunch is Echo, who was presumed killed at The Citadel back in Season 3 of The Clone Wars, He was captured by Separatist forces and hard-wired into a computer. He was rescued by Anakin Skywalker and the Bad Batch during Season 7, and later joined the other four clones in this unusual group.
The show's first episode opens in the final moments before Order 66 is issued, crossing over exact territory covered in Star Wars: Revenge of the Sith as well as the Season 7 Clone Wars episode Shattered.
Jedi Master Depa Billaba and her Padawan Caleb Dume (Kanan Jarus in Rebels, voiced here by Freddie Prinze Jr.) are mopping up a mission when the Bad Batch arrives in the form of reinforcements secured by Dume. The clone commander assigned to Billaba moves off-screen and receives Order 66 from Emperor Palpatine, and promptly opens fire on Billaba. Dume, who had joined the Bad Batch in advancing on the Separatist droid army, senses and hears what happens, and yells out for his fallen master.

Dume, naturally, is highly suspicious of the other members of the Bad Batch, assuming whatever triggered the clones' killing of Billaba will also be visited upon him. Hunter, the leader of the Bad Batch, pleads with Dume for understanding while claiming to not know what's going on. Dume escapes, much to the suspicion of Crosshair, who takes a handful of shots at taking Dume out.
It's a harrowing start to the show, with another angle of the most tragic galaxy-wide event of this era, Order 66.
The Bad Batch is recalled to its home planet of Kamino, where the group witnesses Palpatine declaring the Republic to be reorganized into the first Galactic Empire, news met with cheers among all the clonetroopers present, save for the Bad Batch.
Tech reveals to the group that the Bad Batch don't have the same inhibitor chip all other clones do, which compelled them to obey Order 66. This was an important detail to cover, given the revelations of how the chip works in clonetroopers back in Season 6 of The Clone Wars.
During their time on Kamino, the Bad Batch meet Omega, a young, mysterious character, who immediately takes to the group. She is introduced as a medical assistant, though her exact origins are yet unknown. My guess is she is a female clone, obviously genetically modified from the Jango Fett genome.

Omega is a bright, but naive character who tags along with the Bad Batch upon its exit from Kamino. My guess is she's being set up as the next previously unknown character who emerges in a big way from the show, in the same realm as Ahsoka Tano in Clone Wars, Ezra Bridger in Rebels or Grogu in The Mandalorian. I'm sure more details about her origin will be revealed in time, and look for her to play a bigger role in future episodes.
The first episode concludes with Crosshair separating from the others in the Bad Batch, and giving himself over to further genetic modification, under the strong suggestion of Admiral Tarkin, to enhance the capabilities of his inhibitor chip. I figure Crosshair is being set up as a steady antagonist to the Bad Batch, though he does not turn up in the show's second episode. 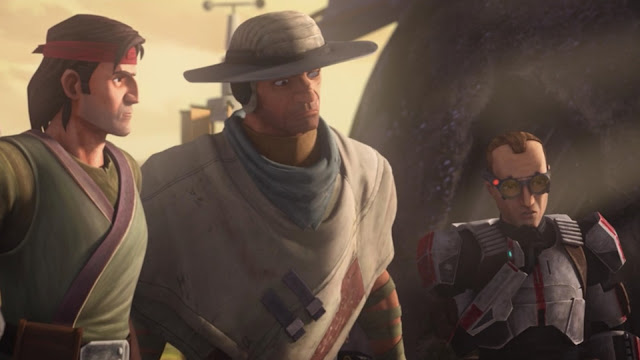 In the second episode, the Bad Batch (now consisting of Hunter, Tech, Wrecker, Echo and Omega) head to Saleucami in search of allies. There, they find former clonetrooper Cut, who left the Grand Army of the Republic and became a farmer back in the Clone Wars Season 2 episode The Deserter. After leaving the army, Cut got married and adopted two kids, adapting quite nicely to life as a farmer. The show explores the life choices presented to clones in a post-Clone Wars setting, setting up some nice philosophical discussions.
We also see the quick work of the new Empire, who mandates chain codes for every citizen if that citizen wants to convert their Republic credits over to Imperial credits. Chain codes were first introduced by Boba Fett late in Season 2 of The Mandalorian, so here, we see the origin of the concept.
Family is a strong recurring theme in all of Star Wars, but particularly in Rebels. That theme is carried through in the second episode, one which has a softer touch than the first. Omega is invited to become part of Cut's family, a choice she declines in order to remain with the Bad Batch, despite Hunter's encouragement to join the escaping family.
I'll be back every week from here on out with weekly recaps of the show, a show I am very excited for. I have loved everything Dave Filoni has helmed for the franchise thus far, and the quality of the animation, lighting and settings in The Bad Batch is just off the charts. The time period this is set in is also my favorite of all eras of Star Wars. The galaxy underwent a sudden and severe change with the transition to an Empire. How does that change affect every day citizens? Clonetroopers, who have lost a sense of purpose with the end of the war? There's a lot of great themes to mine in this setting, through these characters, and it should be an awesome ride.
Brad Monastiere
I live in Michigan and have been an unconditional fan of Star Wars and Indiana Jones for decades. Follow me on twitter @bmonastiere
The Bearded Trio - The Site For Steven Spielberg, George Lucas, John Williams and a whole lot more.