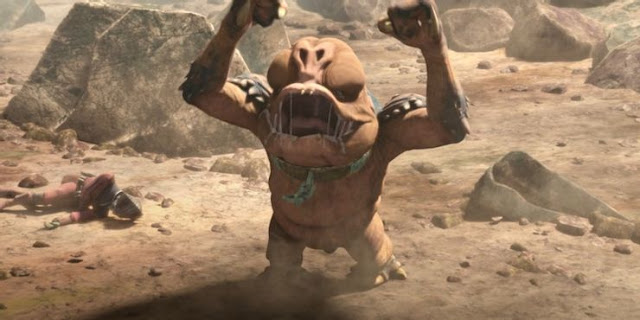 It's all connected.
That's been a popular phrase among large-scale franchises like Star Wars and the Marvel Cinematic Universe in recent years. And in the latest episode of The Bad Batch, it is 100 percent true.
Very direct call-backs and call-aheads are found throughout this fun romp of an episode.
The season's fifth episode, Rampage, hit Disney Plus Friday morning and was a welcomed tangible step forward in the story, especially relative to last week's episode, Cornered.
Omega is presented with her own comlink device as the episode opens, while we return to the story thread of Wrecker complaining about headaches. This comes in just one small part of a scene, but it's a reminder of something potentially tragic happening with Wrecker relative to his inhibitor chip down the road.

Still short on resources, but curious about who hired Fennec Shand to hunt them down, the group travels to Ord Mantell, on Echo's recommendation, to locate an old Jedi contact Cid, who may have information on Shand.
Cid is voiced by Cheers alum Rhea Pearlman, making her the second member of that cast to have a Star Wars connection, after John Ratzenberger (Cliff Clavin) played Major Derlin in Empire Strikes Back. Cid is a female Trandoshan with a distinct New York accent and a gruff attitude. She agrees to help the group dig more into Shand's employer, but naturally, asks for a favor first, retaining the group to locate a child named Muchi.
This is the first appearance of Ord Mantell in animated form, and the animation team did an extraordinary job of detailing out the environment. Ord Mantell, referenced by Han Solo early on in Empire, has a desert-like terrain. This part of the planet houses a slave camp run by Zygerrians, last season in Season 5 of The Clone Wars. 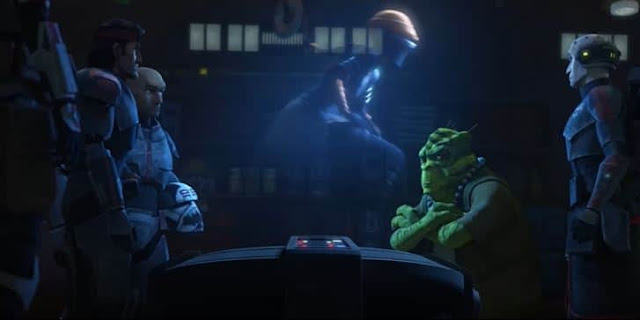 The group is captured and stripped of their helmets and weapons by the Zygerrians, when Omega, who stayed behind on the ship, ventures out into the camp to find them. She lets a monster loose from an enclosed cage. Turns out, this monster is the "child" Muchi, an adolescent female Rancor. This is who Cid wanted the group to rescue.
Muchi, resembling a rampaging Hulk, lays waste to the camp and the Zygerrians until Wrecker finally subdues her, bringing her back to Cid's shop. Waiting for them at the shop are two Gamorrean Guards and Bib Fortuna, creating a direct link to Jabba the Hutt. This leads to the natural question of...is Muchi the same Rancor Luke Skywalker kills in Return of the Jedi? Just in watching this episode alone, the viewer can easily make that deduction. However, in the novel Aftermath, Jabba's pet Rancor's name is revealed to be Pateesa, a male. 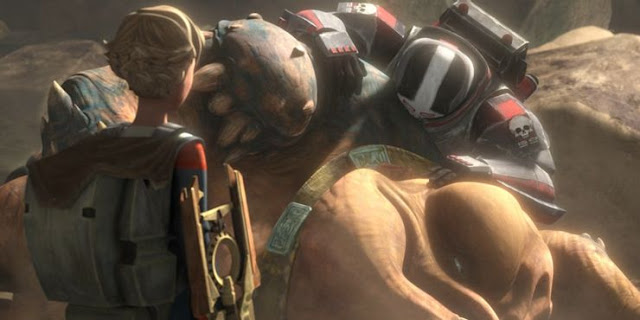 But if The Bad Batch show were to contradict a canon-published story, well, it wouldn't be the first time that's happened. See the season premier, where elements of that episode contradicted the same people and events shown in the Kanan comic. So, like with so many things in life, the beauty is in the eye of the beholder.
Anyway, Muchi is returned to Bib and the guards, while Cid pays the group for their work, leaving the door open for further work, should either side find the need.
This establishes the Bad Batch as mercenaries for hire for intergalactic gangster Jabba the Hutt, a far different role in the galaxy than what the group had when the series opened, when they were a specialized clonetrooper unit for the Galactic Republic. This new status could establish what the group does going forward. Carrying out mercenary jobs across the galaxy while trying to stay well-funded and out of sight of the Empire.
This was my second-favorite episode of the season, fitting snugly within already established Star Wars lore in stories that came both before and after it in the timeline.
Brad Monastiere
I live in Michigan and have been an unconditional fan of Star Wars and Indiana Jones for decades. Follow me on twitter @bmonastiere
The Bearded Trio - The Site For Steven Spielberg, George Lucas, John Williams and a whole lot more.