We are now at the quarter pole of season one of Star Wars: The Bad Batch, with Friday's premier of the fourth episode, Cornered.
This was basically a chase episode that served one primary function: the introduction of Fennec Shand into the series. We first met Shand, played by Ming-Na Wen, back in the fifth episode of season 1 of The Mandalorian, when she was hunting down The Child and Din Djarin on Tatooine.
Here, we meet a version of Shand that is around 28 years younger than the one we see in The Mandalorian. She is introduced fairly early on, when the Bad Batch have to stop for a supply run. They head to the planet Pantora, referenced early in The Clone Wars and home world of Baron Papanoidia, the on-screen character played by George Lucas in Revenge of the Sith.
I do like the premise of the group now having to scrounge around for basics like food and money, because they are now outlaws of the ruling government of the galaxy. Their supplies don't just materialize out of nowhere, as they often do on shows like this. 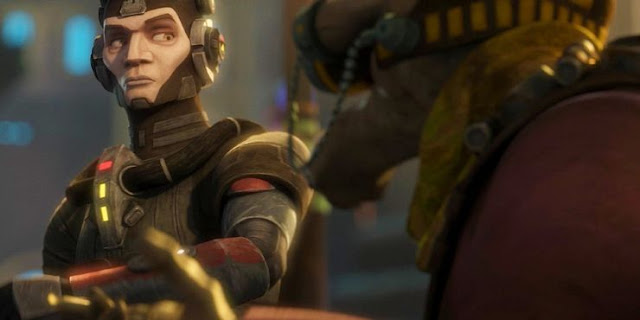 Hunter, Echo and Omega head out into town to fetch supplies, and of course, trouble occurs. A vendor that resembles Ree Yees sees Echo, with a helmet on, and assumes he's a droid and offers to purchase him from the group. Echo agrees to the transaction, assuring the group he'll find a way to escape.
Meanwhile Omega has again separated herself, having found, then lost a Clonetrooper doll that looks similar to Jyn Erso's stormtrooper doll from Rogue One. We see Fennec Shand focus in on Omega as a target, which makes one think she is there most likely on assignment from the new Empire, or perhaps the Kaminoans to retrieve Omega.
A chase ensues, and after several close calls, Hunter picks up Omega and Echo - money from Echo's "sale" intact - and they escape aboard the Havoc Marauder.
Fennec Shand reports back to an unknown party that Omega escaped, but she will stay on the trail. This is an open question as the episode concludes, who Shand is working for.
Like the season's second episode, we don't spend any time with Crosshair or the Empire back on Kamino. This episode focuses fully on the squad trying to make ends meet. It's a good storytelling element, to illustrate the struggles of our protagonists.
People had speculated on Wrecker constantly complaining about headaches in the third episode, perhaps foreshadowing an inhibitor chip issue, but that isn't brought up in this episode.
It feels to me like we are settling in for a deliberate and evenly paced journey, especially after the roaring start the series got off to with Aftermath.
Brad Monastiere
I live in Michigan and have been an unconditional fan of Star Wars and Indiana Jones for decades. Follow me on twitter @bmonastiere
The Bearded Trio - The Site For Steven Spielberg, George Lucas, John Williams and a whole lot more.