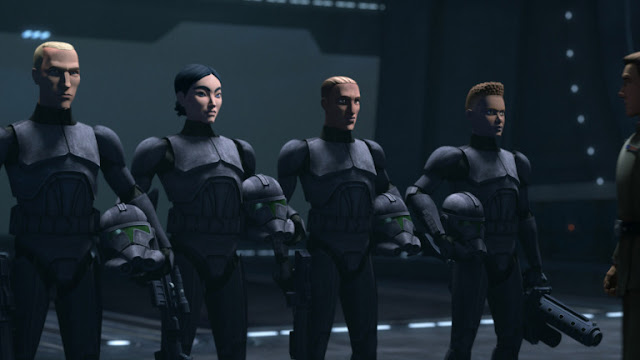 Friday saw the third episode of Star Wars: The Bad Batch roll out on Disney Plus. The characters we meet expands a bit from the first two episodes.
As the episode opens, the group's shuttle, the Havoc Marauder, is malfunctioning in hyperspace. The shuttle gets knocked out of hyperspace, and has to crash land on a remote moon.
Omega takes center stage again, as she pesters the group to be a bigger part of the action, another consistent theme established in the first two episodes. They discover an essential part of the ship, a capacitor, needs replacing. Omega and Hunter venture out into the moon's darkness to fix the capacitor, but naturally, they are not alone,
Meanwhile, we pick up the story on Kamino, where Crosshair is continuing to undergo medical procedures to enhance his inhibitor chip. The effects have clearly made him a more brutal soldier, something we see throughout the episode.
Admiral Tarkin reappears, continuing his campaign to replace the clone army with conscripted soldiers. He designs a test for the Kaminoan leaders, selecting four soldiers in dark grey clone armor to join Crosshair on a mission to take out a band of Saw Gerrera's rebel cell. Crosshair is pegged as the group's commander.
We are also introduced to Rampart, an Imperial first introduced to the world through his release as a Hasbro Black Series action figure back on May 4. He was an unknown to Star Wars collectors then, but he makes his on-screen debut here.
Crosshair and the Elite Clone Squad (also first introduced in six-inch action figure form), make their way to Gererra's camp, only they are unable to locate Gererra himself. The group debates on what to do with the remaining civilians at the camp location. Crosshair wantrs to eliminate them, while one of the soldiers protests, saying they are not there to be an execution squad. Crosshair promptly kills this soldier, then the group brutally eliminates the campers, carrying out, word for word, Tarkin's orders.

They return to Kamino, where Tarkin is clearly pleased that this group accomplished a mission the Bad Batch did not, back in the first episode. He departs, leaving Rampart in charge of the operation on Kamino, to continue to move in the direction of clones training conscripted soldiers for battle. The final shot of this sequence is Crosshair, back in the Bad Batch's residence, sitting quietly by himself, seemingly conflicted.
Back on the moon, we get a real Alien vibe as Omega and Hunter find their capacitor missing. Eggs growing out of the ground pays homage to imagery in Alien, but also the Season 2 Mandalorian episode The Heiress. Hunter gets knocked out by the small dragon that appears to feed off electricity, the kind generated by the capacitor. Omega then takes his pistol and flashlight and dives down into the ground in search of the capacitor. 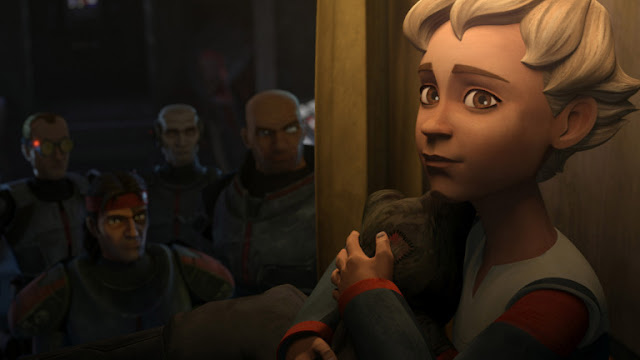 She is obviously in a dangerous situation, but manages to escape harm from the dragon, successfully returning the capacitor to the ship. When she returns to the Havoc Marauder, she finds that Wrecker has built her own room for her, again playing on the themes of home and family this show has set up through the first two episodes.
On the "soft" scale, Replacements falls somewhere between the first two episodes of the season. Omega continues to be a centerpiece of the show, and her dynamic, especially with Hunter, gets deeper with each episode. But the soft scale is thrown out of whack by the time we spend with Crosshair, who is quickly becoming the most brutal cone we have yet encountered. I was intrigued by the final shot of Crosshair sitting on his bunk. There's a lot that can be read into it, whether he feels conflict about what he is becoming, or further hardened by all the medial treatments he's undergoing. Stay tuned.
Brad Monastiere
I live in Michigan and have been an unconditional fan of Star Wars and Indiana Jones for decades. Follow me on twitter @bmonastiere
The Bearded Trio - The Site For Steven Spielberg, George Lucas, John Williams and a whole lot more.