Behind The Scenes - Star Wars: The Empire Strikes Back. The Cloud City Gantry Shot 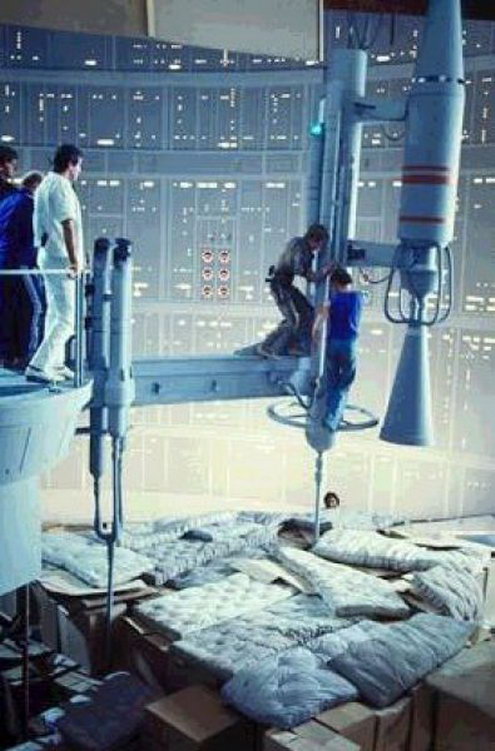 Iconic Moment From The Empire Strikes Back - The Gantry Shot.

Okay, it might not be the bottomless pit of the movie but that's still a bit of a jump!  Let's hope those boxes and mattresses are soft enough to take a young Mark Hamill. 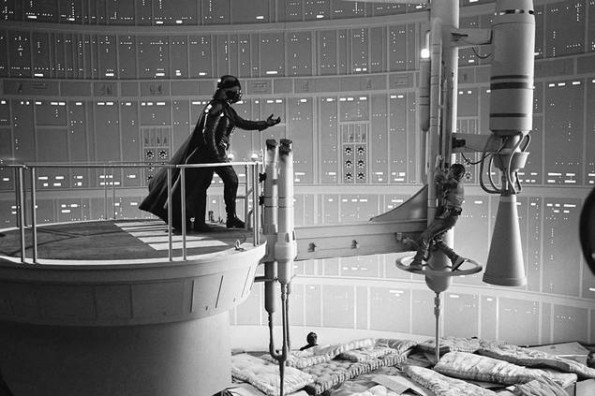 Of course, this shot is the dramatic climax to The Empire Strikes Back where (spoiler) we find out that Darth Vader is Luke's father.  Often misquoted as "Luke, I am your father" the actual line in the movie is  "No, I am your father."
This big reveal was kept secret especially to Darth Vader actor, David Prowse who had a reputation of spilling the beans about the plot to media.  To prevent the actor knowing and others, they replaced the actual lines with placeholder dialogue.   Mark Hamill Tweeted what the original line was on set and the agony of not being able to tell anyone:
"The cast & crew first learned of it when they saw the finished film. When we shot it, Vader's line was "You don't know the truth, Obi-Wan killed your father." Only Irvin Kershner, George Lucas & I knew what would be dubbed in later. Agony keeping that secret for over a year!"
It wouldn't be until moments before the shot that Mark Hamill would be told the actual plot twist.
"Irvin Kershner pulled me aside and, and said, ‘Look, I’m going to tell you something, and I know it and George knows it, so if it leaks, we’ll know it was you.… We’re going to dub in 'I am your father.' I thought, ‘Oh my God, I was as shocked as the audience would later be. This is so primal, nothing could top Darth Vader being your father." Hamill recalls. Screenwriter Lawrence Kasdan told EW the importance of this scene from The Empire Strikes Back and how the whole movie led to this one point:
“All this energy and all this storytelling that proceeded it was aimed at this tiny spot,” Kasdan says of the scene. “It’s like if you were trying to get to Mars and you were one degree off, you wouldn’t get there. That’s what the scene was like for all of us. How do we get there at the perfect time, the perfect place, and have it just absolutely blow people’s minds? It was just extraordinary the size of the picture and the expectations people had for it. The filmmakers are focused the entire time on this one revelation, which we not only want to pull off in the best way possible, but we want to keep it hidden from the world to the release.” 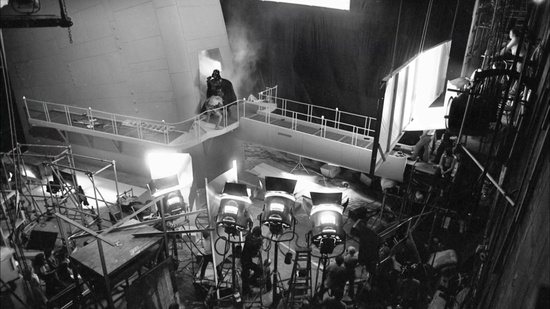 The actual scene was a bit of a challenge for Mark Hamill as there were huge wind machines placed around the set causing the actor to struggle to hear David Prowse say his (all-be-it fake) lines.
And it was a good thing that the fake lines were used as it turned out the actual fake plot was leaked to a tabloid newspaper.  The newspapers were so desperate for Star Wars news that they were offering thousands of pounds in rewards.  I wonder who leaked that fake plot?
Thankfully, these were the days before the Internet and social media so the secret was kept until opening day.  Even Harrison Ford was surprised.   Hamill recalls Ford turning to him at the premiere and saying "Hey, you didn’t f—ing tell me that." 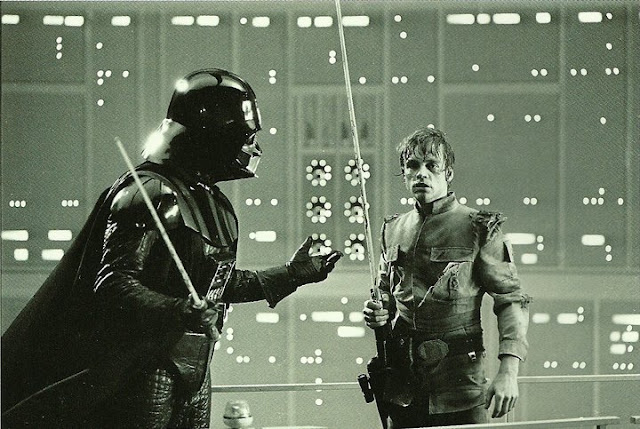