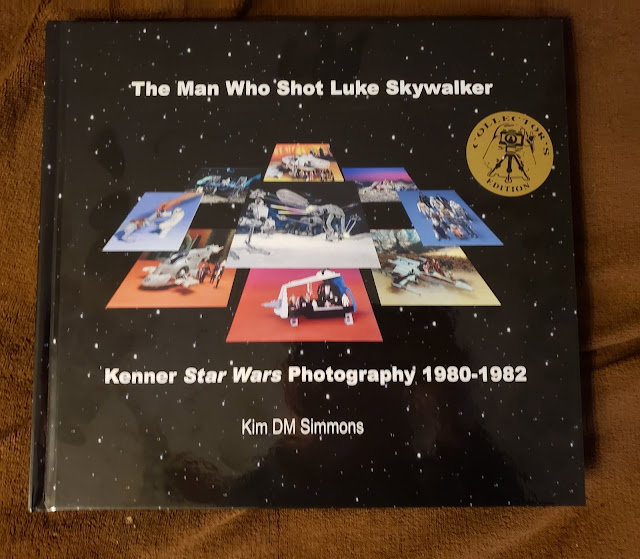 Christmas is just under a month away, but I received a most merry early Christmas gift Tuesday night.

I received my copy of The Man Who Shot Luke Skywalker - Volume 2. This book is the end result of a Kickstarter project that began earlier this year, and details the photography of the vintage Kenner Empire Strikes Back toy line. The first volume details photography for the original Star Wars toy line, covering the years 1977, 1978 and 1979.
This volume covers 1980, 1981 and 1982, the three years of the Empire Strikes Back line. The book was compiled by former Kenner photographer Kim DM Simmons. 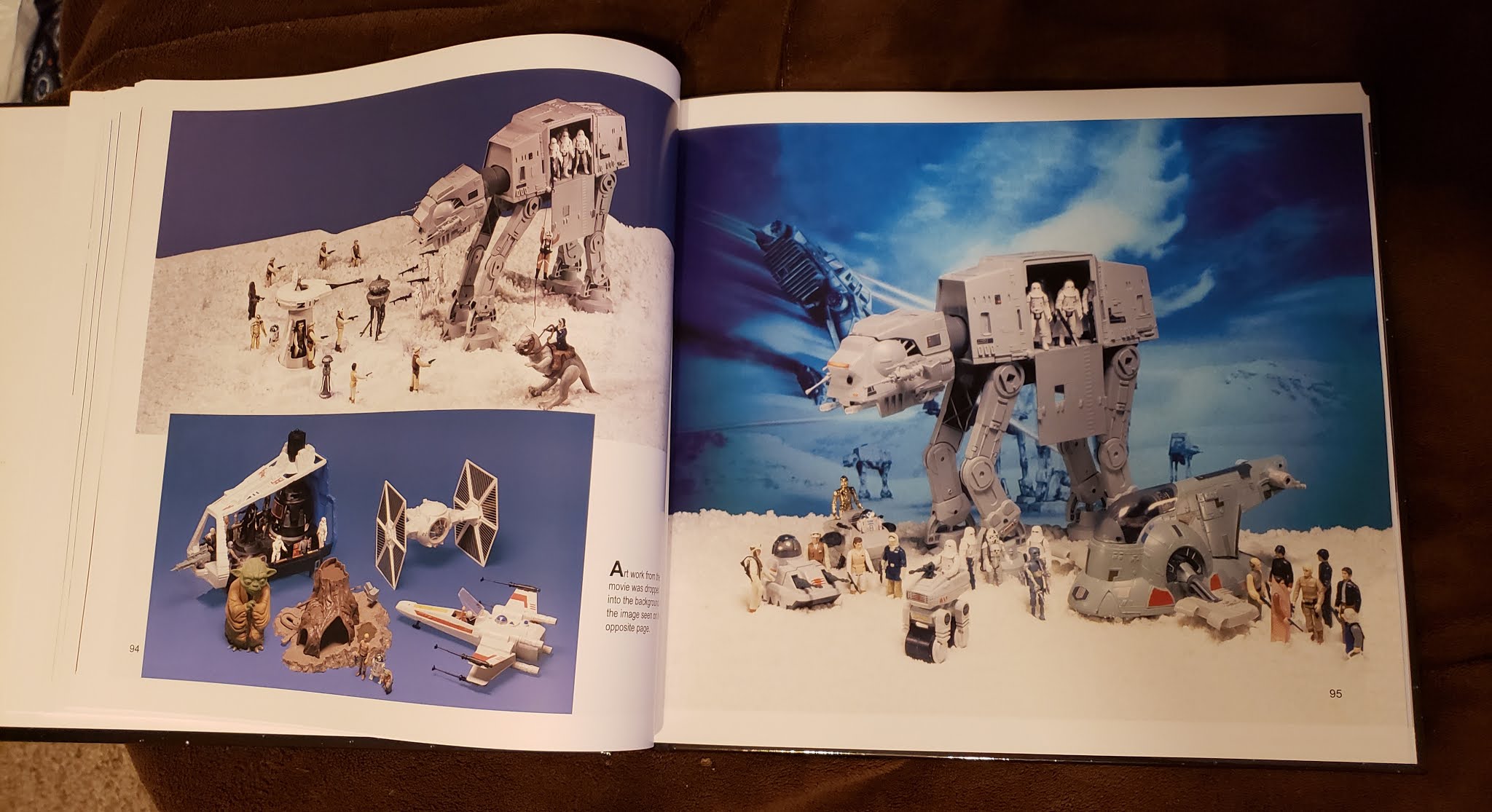 The book is light on text, but text isn't really the purpose of a book like this. The purpose is to show off the photography that made up the slideshow of the childhood of people of my generation, children of the late 1970s and early 1980s.
I was fortunate to be in the position to support this Kickstarter project at the Collector's Edition tier. My book includes an entire section on the famous but short-lived Micro Collection. More on that in a moment.
Page after page of this book is filled with crisp, nostalgia-filled Kenner Star Wars goodness. Simmons is as thorough as one can be at sharing his photographs of the Empire Strikes Back line of action figures, ships, mini-rigs and everything in between. Many photos contrast his original shots with the ones eventually used for the box art on the toy packaging. It's interesting to see the difference in many of these photos. Many were airbrushed from the original prints to either re-emphasize, or de-emphasize background elements, like the cold purple sky of Hoth or the dreamy orange landscape of Cloud City. 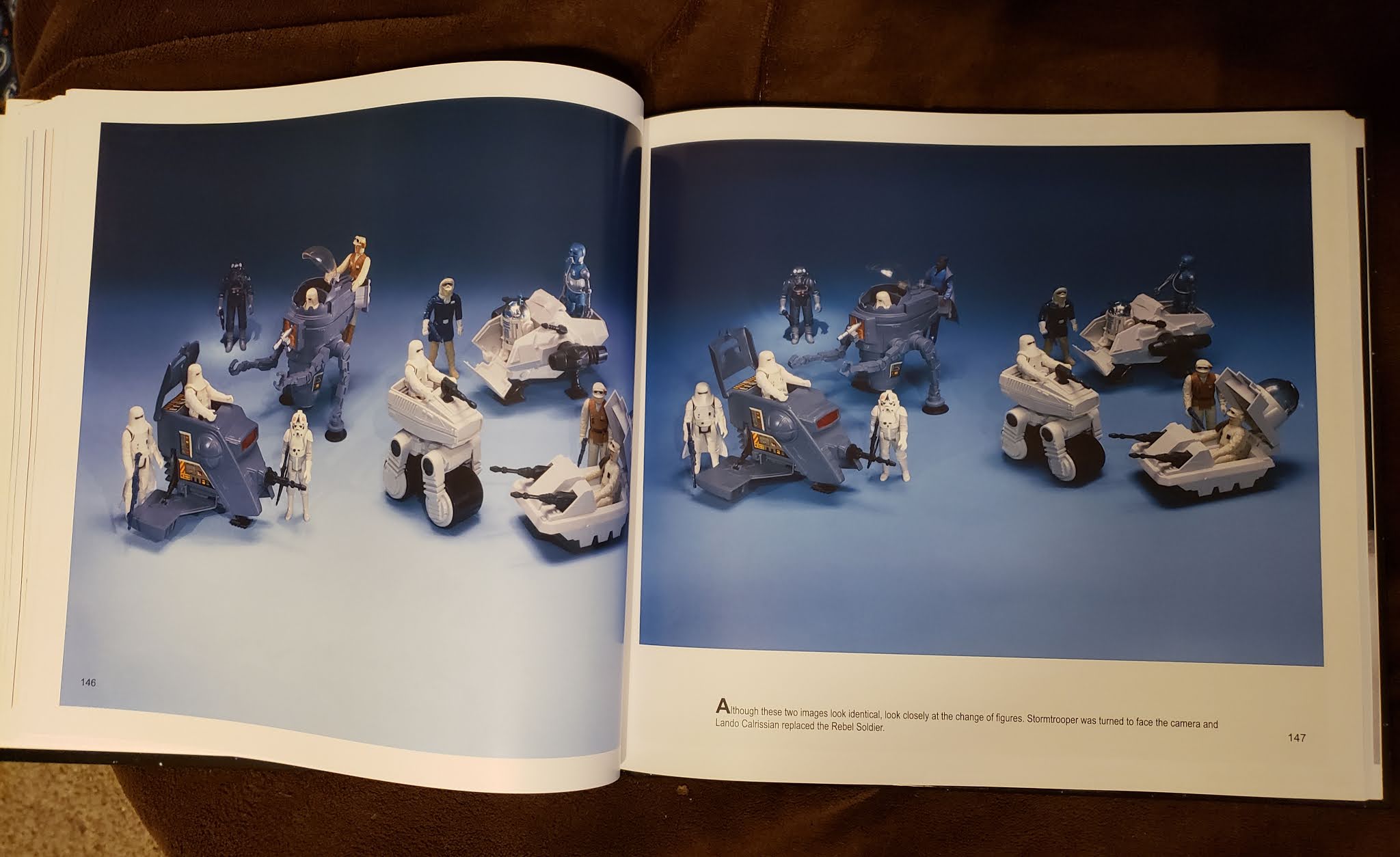 Simmons not only shares the familiar box art photography, but many variations of that same box art. One swapped figure here, or a re-posed vehicle there, and you get good insight into the creative process of how complex this photography can really be. An example of this is in the spread pictured above. The CAP-2 mini-rig on the left has a Hoth Rebel Soldier in the rear. In the photo on the right, Lando Calrissian occupies that space.
Another treat contained in the book are photos of rarely seen toy prototypes. The AT-AT Walker, the largest toy in the Kenner line to date, is remarkably plain in its appearance. No weathering, no detail on the side panels or the cockpit head. It's plain, gray plastic. The Imperial Attack Base, another toy with tons of play value, is a richly detailed piece. But in this book, we see it in its prototype form. A solid white piece of plastic, with none of the carved-into-ice texture that made this such a standout.
Up-close photos of the heart of the line, the action figures, also highlight the book. What's noteworthy about many of these are the paint variations from the figures we've all come to know so well. The tan paint on 4-LOM (now known as Zuckuss) is a solid shade darker. The front of the hood on Han Solo - Hoth has white highlights, far different from the final version of the figure. The sculpted-in lightsaber on the leg of Luke Skywalker - Bespin Fatigues, is fully painted, with the gray hilt and black handgrip. In the final version, it's all black. 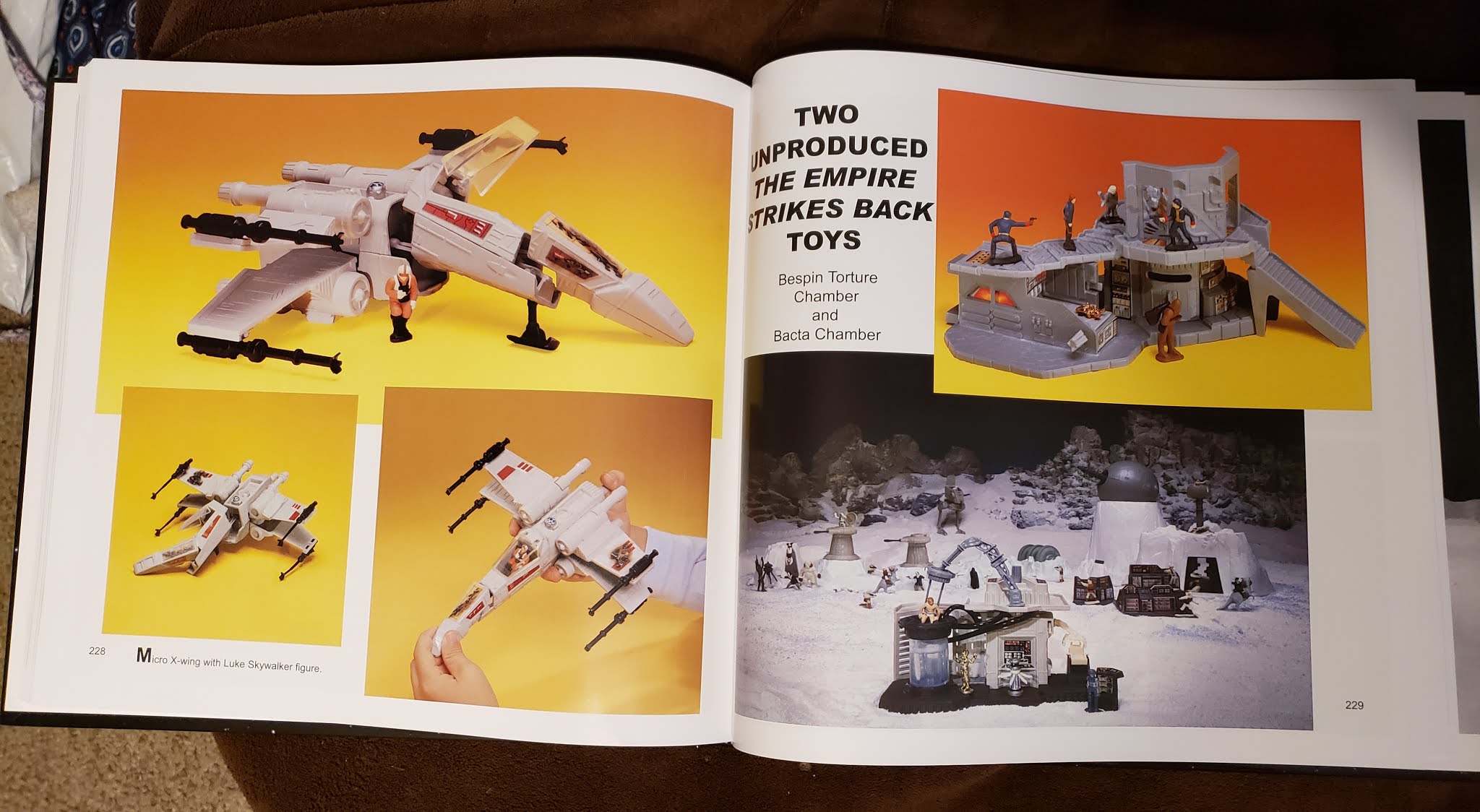 Amidst all the fun in this book, a true joy for me is the section on the Micro Collection. As far as I know, this book gives the largest page count and most photographic detail to this mini-line than any book that came before it.
The Micro Collection was unveiled in 1982 as a smaller, lower-cost alternative to the basic line. There were ships and playsets, packed with die cast figures that naturally went with their respective vehicle or environment. Three main sets - Death Star, Hoth and Bespin - all had sets that could connect to one another that could make up a "World." I remember being sick for a week when I was in fifth grade and I spent nearly all of those days experimenting with the Hoth World, recreating the rumored-but-never-seen Wampa attack on Echo Base. Close-up, detailed photos of that beloved Micro Collection strongly populate this book.
There are even photos of prototype Micro Collection sets, like the Hoth Medical Center, that were never released. Unreleased prototypes of 12-inch figures like Bespin Luke, Hoth Han and Bespin Leia are also pictured here, in greater detail than I had seen previously. These pictures light another spark to the imagination - pictures of the toys that could have been.
Kudos all around, to not only Simmons, but Justin Berger, who was a key figure in this book's development. A total of 424 people signed up for this Kickstarter. The book publishers just announced (Wednesday evening in the USA) that 50 additional copies of the book would be made available on the book's website, www.themanwhoshotlukeskywalker.com starting at 1 p.m. EST Friday in the USA.
Simmons has already hinted at a Volume 3, which presumably would cover the Return of the Jedi toy line. Indeed, a small reference to Volume 3 is made in this book, and I cannot wait to enjoy that volume as well.
The Man Who Shot Luke Skywalker - Volume 2 hits every nostalgic beat possible for those who obsessed over collecting the toys back in that magical vintage era. We don't have to rely on that aging, fuzzying memory to remember these toys that we spent so much time with back then. This book, along with Volume 1 and the promised Volume 3, combine to preserve those memories for us for all times.
Brad Monastiere
I live in Michigan and have been an unconditional fan of Star Wars and Indiana Jones for decades. Follow me on twitter @bmonastiere
The Bearded Trio - The Site For Steven Spielberg, George Lucas, John Williams and a whole lot more.