SPOILER REVIEW: Season 2, Chapter 9 of The Mandalorian: The Marshal

I'M WARNING YOU RIGHT NOW, SPOILERS FOR THE SEASON 2 PREMIER OF THE MANDALORIAN ARE BELOW. I SHIELD YOU FROM NOTHING!
OK, YOU'RE WARNED!
IF YOU HAVEN'T WATCHED THE EPISODE YET, STOP HERE, GO WATCH IT AND COME BACK FOR MY REVIEW.
WE GOOD?
OK, those are the formalities officially out of the way. Each week, I'll be posting a quick recap/review of each new episode of The Mandalorian. I'll give a basic play-by-play with some thoughts and speculation about how each episode could figure into the larger picture of this season, and Star Wars as a whole.
So let's get after it.
SEASON 2: CHAPTER 9: "THE MARSHAL"
EPISODE PREMIERS ON OCTOBER 30, 2020
DIRECTOR: JON FAVREAU
EPISODE LENGTH: 55 MINUTES
OVERVIEW:
The Mandalorian was a smash hit a year ago when it headlined the debut of Disney Plus, the entertainment giant's new streaming service. Friday saw the first chapter in the highly anticipated new season, and that chapter did not disappoint.
We start by following Dinu Djarin (The Mandalorian) and The Child into a boxing arena, where two Gamorrean Guards are battling with vibro axes. The fight is the backdrop as Djarin speaks with a cyclops character named Gor Karesh. Djarin believes he has information on the whereabouts of other Mandalorians, the object of Djarin's search. There is a brief cameo of a character that looks much like the hyped, but invisible-from-the-film Constable Zuvio from The Force Awakens.
Of course Karesh betrays Djarin, and he, and several other thugs turn their weapons on Djarin. But Djarin being Djarin, he dispatches of all these thugs rather easily. Karesh gives up the location of the Mandalorian Djarin is looking for: Tatooine.
Upon returning to Tatooine, Djarin leaves the Razor Crest to season 1 returnee Peli Motto. Interestingly, she and Tusken Raiders are the only characters from season 1 to appear in this episode (besides Djarin and The Child). Director and Showrunner Jon Favreau does a nice job of nudging us into the second season without relying too much on season 1 characters.
But first, can we talk about the beloved original trilogy character who returns? Are you ready?
R5-D4 is back, baby! There's even a shot of his burned out bad motivator that we all remember from the purchase of the droids scene in A New Hope.
R5 displays a map that shows Djarin where Mos Pelgo - the location of the Tatooine-based Mandalorian is.

Djarin makes his way into a cantina in Mos Pelgo. There's he's greeted by a man clearly wearing Boba Fett's armor. It turns out to be Cobb Vanth, the town marshal. They at first appear to square off as adversaries, but quickly come to be aligned when a Krayt Dragon rumbles under the sandy earth, terrorizing the citizens of Mos Pelgo. Being practical, Vanth and Djarin come to an agreement: Djarin will help rid the town of the dragon and Vanth will give Boba Fett's armor to Djarin. But they'll need help.
Djarin and Vanth mount speeder bikes to locate the Tusken Raider camp for that help. Djarin is on a conventional bike, but Vanth is riding one that appears to have been constructed from parts of Anakin Skywalker's podracer from The Phantom Menace. It is a single-engine speeder bike, but the yellow flaps and fuselage are clearly lifted from Anakin's pod. For the record, Anakin's pod was sold after he won the Boonta Eve Classic just outside Mos Espa during the events of TPM. Clearly, some remnants of that pod made their way to Vanth. This isn't the last call-back to TPM I detected in this episode.
During their ride, Vanth tells Djarin of the state of his town, and how Mining Collective soldiers took over the town the same day the second Death Star was blown up. The guild members clearly felt emboldened by the elimination of the Empire. It's a nice way of illustrating how lawless parts of the Outer Rim became upon the Empire's downfall, an element lurking in the background of the show. Vanth escaped from the Collective's attack, wandered the desert, and was picked up by Jawas. Contained within that Sandcrawler was the remnants of Fett's armor, presumably scavenged near the Sarlacc Pit, as seen in Return of the Jedi.
Another prequel-era character pops up, and that's the massif, a cross between a raging dog and a mini-dragon, seen on Tatooine as part of the Tusken camp in Attack of the Clones when Anakin is searching for Shmi. Djarin successfully communicates friendliness to the massifs, which leads to the Tuskens cordially welcoming Djarin back to their territory.
Djarin's skills at speaking Tusken, shown in the show's first season, come in handy here as he helps plan and translate with the Raiders on taking down the dragon. Vanth and Djarin return to Mos Pelgo to convince the natives to cooperate with the Tuskens in this plan.

This scene was very reminiscent of The Phantom Menace when the Naboo and Gungans, previously adversaries, join forces to defeat the Trade Federation.
"Mom you say the biggest problem in this universe is that nobody helps each other," - Anakin Skywalker to his mother Shmi in The Phantom Menace. That theme is explored deeply in this episode.
The Tuskens, villagers, Vanth and Djarin eventually slay the Krayt Dragon, giving the villagers and Tuskens peace and the Fett armor to Djarin.
As Djarin rides off into the double sunset with the armor, we get an over-the-shoulder shot of an observer of Djarin on his speeder. The person, armed with gaffi sticks (preferred weapons of the Tuskens), then turns around to camera to be revealed as Boba Fett himself, played by Temura Morrison, the same actor who played Jango Fett in Attack of the Clones and clonetroopers in AOTC and Revenge of the Sith. 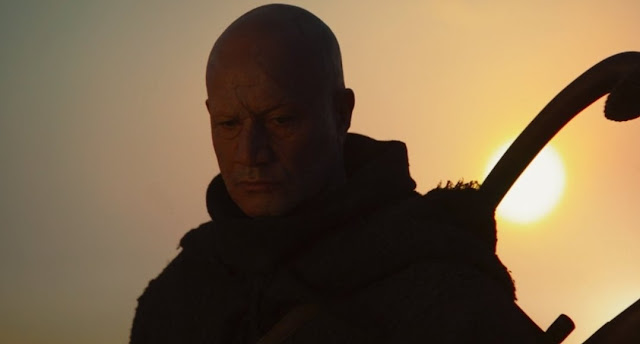 WHAT DOES IT ALL MEAN?
Boba Fett's reveal kind of takes over this episode. It was the very last shot of the show, but portends bigger events to come in this season. It is reasonable to assume that he remained on Tatooine in the intervening years from when he fell into the pit until we see him in this episode. He's bald and dressed very much like a Tusken. His presence raises all kinds of fun questions this season might answer.
The Tusken Raiders are portrayed very differently in this episode as well. Hardly the "vicious, mindless monsters" Cliegg Lars called them in AOTC. Perhaps the Tuskens have evolved in the years since the prequel era? They are shown as thoughtful, mechanically skilled and deeply caring of their Banthas. 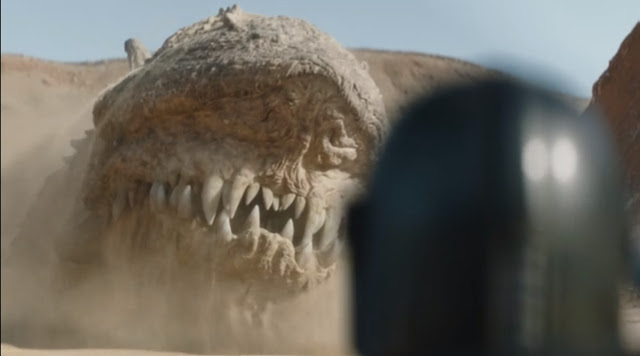 Djarin is much more vocal in this episode than he was in the first episode of the first season. He's becoming a leader, a unifier. More active in the interests of those besides himself. His goals in the beginning of the first season were entirely selfish. We now see his selflessness extending out even beyond The Child.
Overall it was a strong opening to a season that has fairly high expectations. This episode, more than any other in the series, is steeped both narratively and symbolically, within the Star Wars mythology. It feels like a more significant piece to the larger puzzle than any of the season 1 episodes did, and that's not a criticism of the first season. The new ride has just begun, so let's enjoy it!
Brad Monastiere
I live in Michigan and worked in athletics.
Been an unconditional fan of Star Wars and Indiana Jones for decades.
Follow me on twitter @bmonastiere
The Bearded Trio - The Site For Steven Spielberg, George Lucas, John Williams and a whole lot more.