John Williams Music To Help You During Lockdown - Fawkes The Phoenix 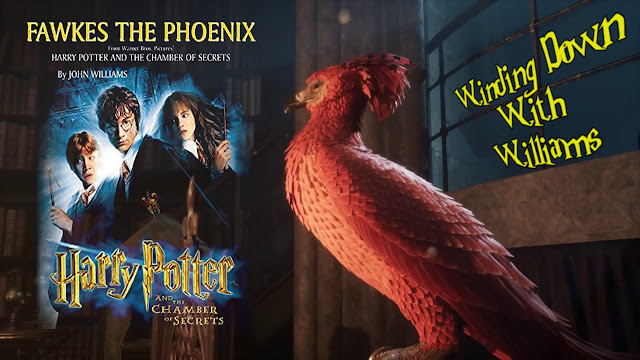 Winding Down With Williams - Fawkes The Phoenix

If there is one thing you can rely on with John Williams is how you can easily find a piece of his music that will invigorate and uplift you.  Of course with the current world situation and most of us either still in lockdown or about to enter a second restriction, this is something we really need right now.
My first choice to help you wind down with Williams is one of my favourite pieces from the composer as it evokes feelings of magic and wonder.  It is Fawkes the Phoenix from Harry Potter and the Chamber of Secrets.
Fawkes the Phoenix in the world of Harry Potter is the pet and defender of Professor Dumbledore and a graceful, magical creature that was instrumental in defeating Salazar Slytherin's basilisk in the Chamber of Secrets.  John Williams captures that gracefulness and magic of the creature in the theme and it is one of my go to pieces for making me feel calm and relaxed.
In the Harry Potter movies the melody will often be played whenever the Phoenix is shown.  The piece will start off calmly but by the end you will be swept into the magic of the Harry Potter world with a moving fast, uplifting pace thanks to the staccato notes used throughout.  A beautiful piece that will leave you feeling happy and warm.
Fawkes the Phoenix is John Williams at his best with similarities to E.T. The Extra-Terrestrial and Across the Stars from Star Wars: Episode II - Attack of the Clones (which may be featured in a future recommendation.)
If you are on Spotify then you can listen to this and other relaxing John Williams pieces in our playlist "Winding Down With Williams."  I plan on covering other pieces to listen to during lockdown so feel free to suggest a track that I should include.
Stay Safe and well.
Rob Wainfur
The Bearded Trio - The Site For Steven Spielberg, George Lucas, John Williams and a whole lot more.