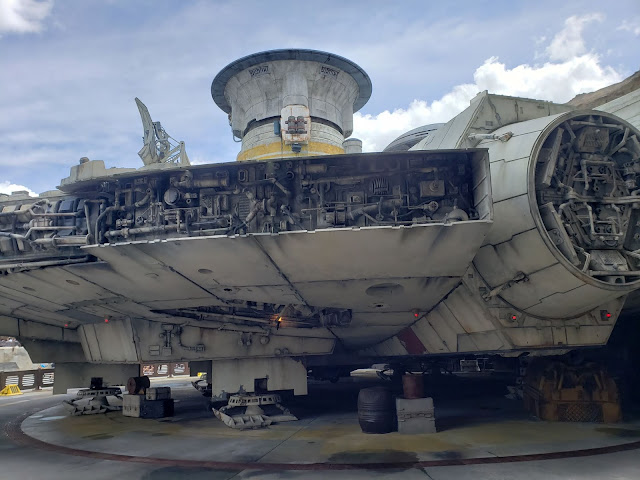 I was able to wander through Star Wars: Galaxy's Edge for the first time on August 28 and September 3. In my last post I wrote about my general impressions of the land. Here, I will go into detail about my experiences on Millennium Falcon: Smuggler's Run and Rise of the Resistance.
Rise has gained quite a reputation in its short life as a vexing attraction. The ride experiences frequent breakdowns, and infamously, was recently and literally struck by lightning.
RISE OF THE RESISTANCE
First off, here's how you get your spot in the virtual queue: Get into Disney's Hollywood Studios by 10 a.m., or "rope drop." Be sure you are inside the park entrance by this time. Have the My Disney Experience app open on your phone. Scroll down a bit on the app to find the Rise of Resistance section. At precisely 10 a.m., hit the "JOIN" button. Like, do it the first second you're able to. And don't be on the park's Wi-Fi. Just be on whatever network you subscribe to. You'll get faster linking that way. Click any additional people to add to your party. Then wait. Hope. Pray. Get lucky. Maybe you'll be assigned a boarding group. Maybe you won't. It's a total crapshoot.
I did all this within 3 seconds of 10 a.m. on our first day there and I got assigned boarding group 32. You could hear cheers from people around us who also had the good fortune of landing in a boarding group. You will get a message if you were successful in obtaining a boarding group. You will then see a five-section progress bar with an R5 droid atop of it, estimating your wait time to get in line. Mine was initially 150 minutes.
The day I was there, Rise was down for around 90 minutes in the middle of the day. It was ultimately around 4:25 p.m. when boarding group 32 was eligible to get in line, more than six hours after the park opened. 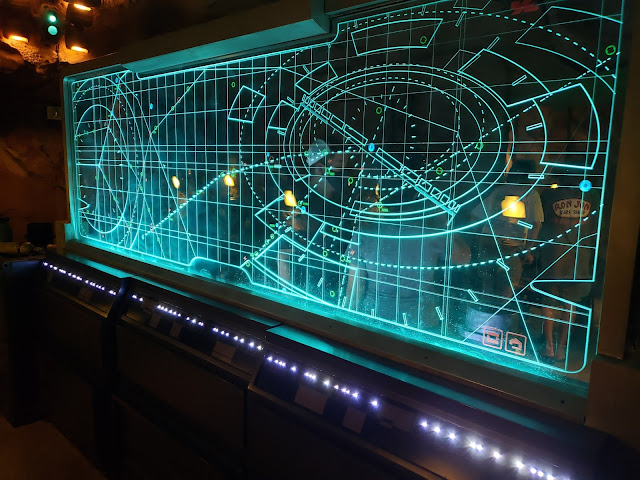 The line through the queue moved slowly, but steadily. And for a Star Wars nut like me, it was a fascinating line to move through. The line environment really gives you the feel of walking through a rebel base, especially the one featured in The Force Awakens and Rise of Skywalker, set among trees, bushes and stone. The decor, lighting and overall mood really reflects those environments effectively. It complements my overall impression of the land in that it's so immersive.
As you move through the line, you see view screens like the one pictured above, and lockers that contain flight suits, weapons and helmets. It's a fascinating walk, through this queue, one I thoroughly enjoyed.
The first part of the experience is you're taken to a meeting room where you see BB-8, followed by a hologram Rey detailing your mission. Poe and others also appear on view screens in this area. I gotta say, the Rey hologram looks amazing in person. It was like technology George Lucas envisioned 45 years ago was right there in front of me.
You're then taken to a hold out area, where you are assigned a numbered circle to stand in. You then move inside the transport to that same numbered circle, where you "take off" on your mission. It's a bit of a bumpy ride until the transport is captured by First Order forces.
You then board a FO Star Destroyer, which is amazingly detailed. Watch the sequence early in The Force Awakens when a captured Poe is being taken to his interrogation room to get an idea of what it looks like. There's a full-sized FO TIE Fighter embedded in the wall, just like in that scene.
Disney Cast Members are not only dressed up like FO officers, they act the part, interrogating people in line. As an adult I found it a tad amusing, but as a kid, enmeshed in that environment, I can see it being intimidating for those 10 and under.
You're guided into a triangular-shaped "cell" awaiting interrogation by Kylo Ren or more FO officers. You then see a square being cut on the left side of the room. That means you are being broken out by Resistance personnel.
You then board a small transport as the "ride" part of the attraction begins. You are advised to take off your hat if you're wearing one (I was) because there's a sharp drop late in the ride.
More interiors of the Star Destroyer are present and awe-inspiring as your transport whips about in an escape attempt. Two full size FO AT-ATs can be seen among the many impressive sights. Your transport passes under massive cannons and through the interior of the Star Destroyer until you are finally guided to the end.
The construction is incredibly well-detailed and the characters you encounter are completely realistic. My guess is you are engaged in the attraction, from start to finish, around 25 minutes, depending on how quickly your line moves.
MILLENNIUM FALCON: SMUGGLER'S RUN
Your My Disney Experience app should show you consistent and accurate wait times for this attraction. When I was there, it generally moved between 25 and 45 minutes. 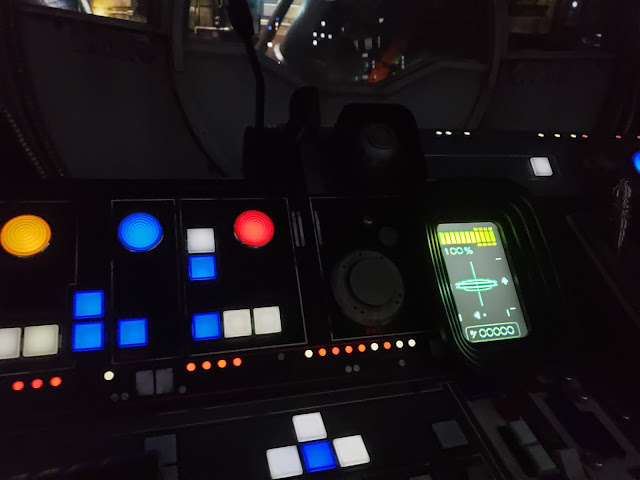 This line queue is shorter and a bit less detailed than the one for Rise. But man, nothing can replicate walking through the hold of the Millennium Falcon. I've seen many people get photos taken at the Dejarik table, but my line was moving pretty steadily, and my guess is because of COVID, Cast Members didn't want people sitting down in that area. My walk through this area was memorable, but far too short.
My wife and I were the only ones to go into the cockpit for our turn on the ride. I also attribute this to COVID, because from all I've read, you go in as a crew of four or six, and assume different aspects of the ship as you fly through your mission area. I assumed the left pilot position, so I was in charge of "moving" the ship horizontally. Hondo Ohnaka shouts commands at you through the ride. You'll see flashes on the screen in front of you if you "hit" something, but you don't crash at any point.
The experience of flying the Falcon is akin to a more intense and interactive version of Star Tours. You get the 3D effect, but it's closer, bigger and louder. It is loads of fun, if again, a bit short.
Overall, I'd say these two attractions rate very close to one another, if not even. Rise is portrayed as the higher-premium experience, but I had just as much fun with Smuggler's Run. There is no reason to not have these experiences if you're ever in Galaxy's Edge. Highly, highly recommended.
In the third part of this mini-series, I'll write about the overall Disney World experience in the era of COVID.
Brad Monastiere
I live in Michigan and worked in higher education. Been an unconditional fan of Star Wars and Indiana Jones for decades. Follow me on twitter @bmonastiere