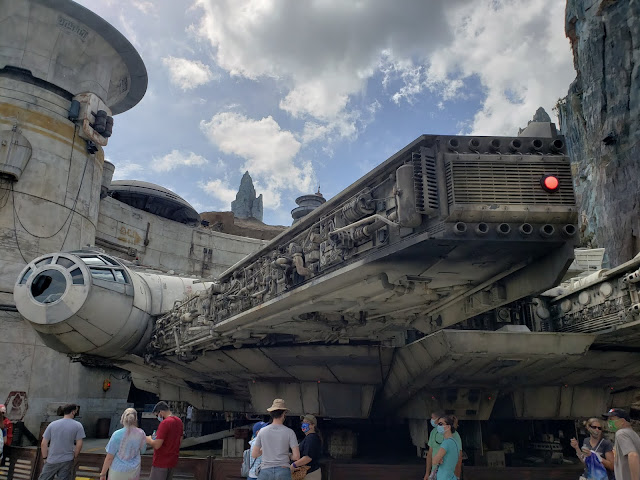 Something good had to happen in 2020, right?
This year has been an unimaginable challenge for so many of us. But a bright spot emerged for me last week when I was fortunate enough to make a week-long trip to Walt Disney World in Orlando for an overdue but welcome vacation.
The highlight of that vacation was my first-ever visit to Star Wars: Galaxy's Edge.
I'll be going over the details of my trip in two parts. Today's first part takes a general approach to what I discovered in my first impressions of the land. Part two, publishing later this week, looks at Galaxy's Edge, and Disney through the prism of COVID, an unavoidable aspect of this particular trip for my wife and I.
A couple of left turns get you to the concrete entrance to Galaxy's Edge, once you enter Disney's Hollywood Studios. There, you walk through a short tunnel which opens up into the land. If the Disney Imagineers succeeded at anything with GE (Galaxy's Edge) - and they succeeded in quite a lot - it was creating an immersive environment. Within a few seconds of walking through that tunnel, I had no hint I was walking through an outdoor amusement park. Instead, I found myself actually on a Star Wars planet, one that just so happened to be equally hot and humid as Florida in late August.
Sights and sounds are the biggest parts of that immersion. As you look up, you see Tatooine-like buildings all around in addition to the black spires, where Black Spire Outpost takes its name from. No hints of anything else besides the world, is in sight.
The area I started walking through is located closest to the Rise of the Resistance ride. There is more plant life in that part of the land, and there's a continual stream of alien animal sounds and shrieks coming from the bushes and trees. But they aren't enough to overwhelm the senses. They are just loud enough that you notice them, but not so loud that they evolve into anything beyond a pleasing ambiance. 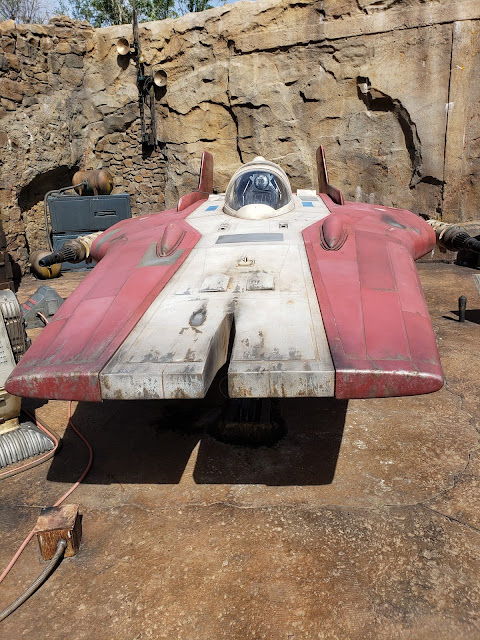 On my right I saw one of several parked starfighters, this one the A-Wing, which was first seen in Return of the Jedi. For its inclusion in GE, the sequel-era model of the A-Wing was used, which featured a slightly larger and longer nose than the one seen in the original trilogy. The barrier around the fighter was set so that you couldn't reach out and touch the ship, but you could get fairly close. Another fun detail was that you can hear radio chatter coming from the A-Wing cockpit, like it was picking up current communication from Resistance envoys scattered through the galaxy as you walk by.
I took as much time as I could to drink in the details of the buildings, walkways, shops, sounds and characters as I could as I walked through GE. The building's designs fit in perfectly with the Star Wars aesthetic. I am one who tends to look for flaws in anything that seems overly popular, no matter what the subject is. And even though my Star Wars fandom is close to my heart, I looked at everything in GE with a critical eye. And I was still blown away by the attention to detail.
There's a shuttle parked on top of a building that has its rear engine lights on, and the sound of a starting and failing engine, can be heard anytime you walk by. It plays into that used universe style that has made Star Wars so distinct, going back to 1977. 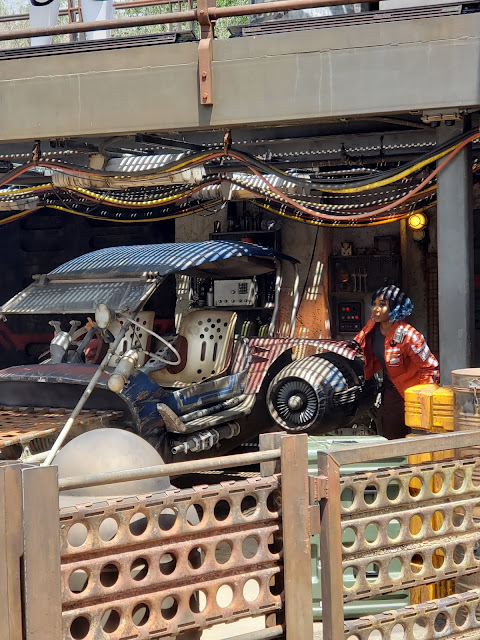 Costumed characters weren't common, but I did see several during my two trips last week. A pair of First Order Stormtroopers were the most common. They were spotted on top of the speeder garage, surveying the crowd for Resistance spies and having general banter back and forth with one another. Apparently, unnoticed by them, was the most prominent spy, the character known as Vi Morandi. She has distinct purple and white hair and a hard-not-to-notice orange resistance jacket. She was sneaking around the lower level of the garage, hoping to not be noticed by the aforementioned troopers. Word is, she will interact with guests once in a while, hoping they will held keep her concealed from the First Order, through I only saw her walking around the garage.
The stormtroopers also popped up in the First Order corner of the land, highlighted by the TIE Echelon, belonging to Kylo Ren. The ship sits on a stage in one corner of the land, next to a First Order shop. I did see Ren with his troopers stalking about the stage, expressing his frustration at not finding more Resistance spies among the crowd. The TIE Echelon is a well-designed ship and fits into the family of TIE fighters perfectly.
One of the more comfortable - by that I mean covered in shade - areas of GE is the marketplace. Shops line both sides of the street with a netted covering over top of the area. The shops contain more kid-oriented items like plush toys of creatures like the tauntaun, loth-cats and other furry types. I wouldn't say there was much in terms of higher-end type of merchandise outside of the legacy lightsabers. 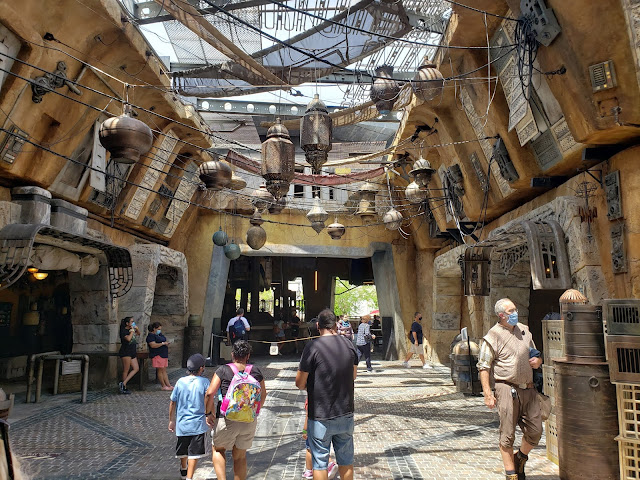 This represents one of the first COVID-mandated changes in GE. Previously, legacy lightsabers - those modeled after the ones used by characters like Luke Skywalker, Darth Maul, Obi-Wan Kenobi, Mace Windu and Rey - were available to view and purchase inside Dok Ondar's Den of Antiquities. Now, you can only view the sabers in a display case in Dok's. To make a purchase, you are directed to Savi's Workshop, which is just around the corner from Dok's.
But be careful how loudly you tell the Cast Member working at Savi's you wish to purchase a lightsaber. He'll shush you so as to not alert the ever-patrolling stormtroopers in the area.But once inside, you go down a small flight of stairs into a small alcove with a long table in the center. This is where the lightsaber building experience had been located, but again, because of COVID, that experience has been shelved for the time being. Instead, you're asked to select which lightsaber you want, and you get to examine it up close and hold it in your hand before deciding on a purchase. I settled on the Anakin-Luke-Rey lightsaber because it represents all eras of Star Wars and was wielded by main characters in all three trilogies.
A word here for the Disney Cast Members working at GE. They were all terrific. But if you haven't been there, understand that they aren't your typical Cast Members working in the parks. They are intended to act as part of the world you're in. They are Black Spire Outpost workers and residents, and will interact with you as such. Helpful to know, if any of their conversations seem odd to you.
The next post will detail my experiences on the land's two primary attractions: Millennium Falcon Smuggler's Run and Rise of the Resistance. 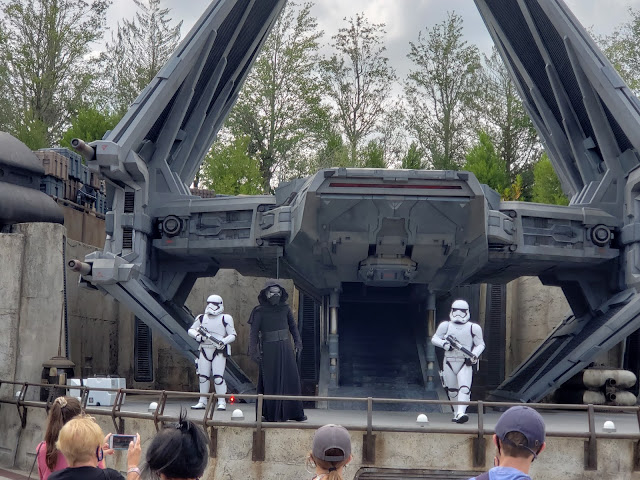