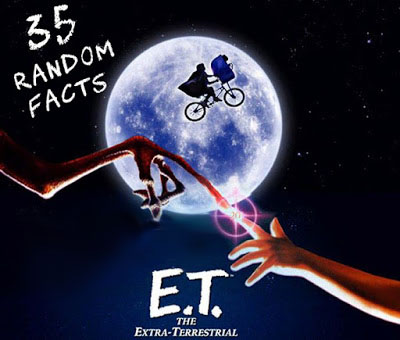 35 random facts on the 1982 classic, E.T. The Extra Terrestrial which was directed by Steven Spielberg.

1 - The original idea for the. E.T. movie was Night Skies, a semi-sequel to Close Encounters of the
Third Kind and had a whole darker story.  The aliens were set to terrorise  the people of Earth.  The evil aliens would communicate with various animals including chickens and cows to see who was sentient.

2 - $700,000 was spent on the animatronics effects for Night Skies by horror effects wizard, Rick Baker.

3 - The movie was changed to the more tranquil story we know today after Spielberg decided he wanted a change of pace after filming Raiders of the Lost ark which had explosions and evil Nazis. 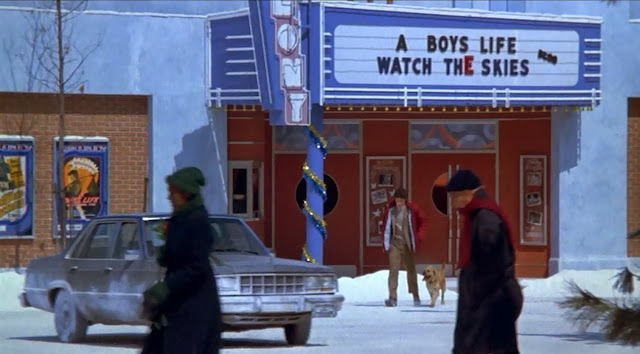 5 - The movie held the record for highest grossing movie until another Steven Spielberg came along in 1993, that movie was Jurassic Park.

6 - Carlo Rambaldi, who designed the aliens for Close Encounters of the Third Kind, was hired to design the animatronics of E.T. Rambaldi's own painting Donne del Delta (Women of Delta) led him to give the creature a unique, extendable neck. 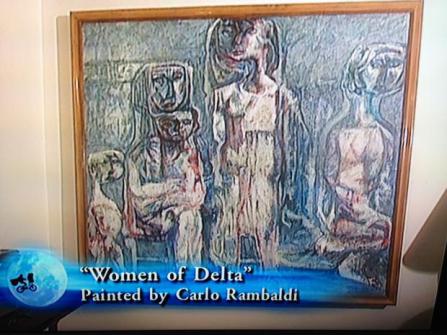 7 - E.T's face was inspired by those of Carl Sandburg, Albert Einstein and Ernest Hemingway
8 - It's unusual for a director of a movie to change the edited sequences to suit the music but Steven Spielberg loved the music to the final chase so much that he edited the sequence to suit it.  The music of course was by John Williams.

9 - The late and great Michael Jackson owned one of the E.T. puppets 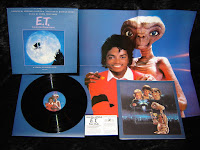 11 - Steven Spielberg shot most of the movie from the eye level of a child in order to connect audiences with Elliot and E.T.  Apart from Elliot's mother (Dee Wallace) we don't get to see the top half of an adult until the second half of the movie.  "I wanted to suggest them like in a Tom and Jerry cartoon where, when the Mom comes in you only see her from the waist down" said the director.

12 - Steven Spielberg worked on both E.T. The Extra Terrestrial and Tobe Hooper's Poltergeist at the same time.

13 - Pat Welsh, an elderly woman from Marin County, Calif., provided the voice of E.T. Sound effects creator Ben Burtt found that her gravelly voice, coarsened by nearly two packs of cigarettes a day, was perfect for the part. Welsh earned $380 for her nine-and-a-half hours of recording work.

14 - John Roesch was the Foley Artist for E.T. The Extra Terrestrial.  He said to create the noise of E.T's waddling walk he filled a wet T-shirt with jelly (jello.)

15 - Cory Feldman was originally set for a role in E.T. The Extra Terrestrial but due to a script re-write (probably to the more tranquil version) his role was no longer required.  Steven Spielberg felt so sorry for Feldman that he promised him a part in a future movie.  Subsequently we see Feldman in Gremlins (1984.)

UPDATE - Thanks to a comment from James Cole over on the excellent EveryThing E.T. Facebook Group, Feldman would have likely played the character of Lance, a friend of Elliott's but an all-around pain who is too nosey. He exists in the book but was thankfully cut from the final shooting script before shooting began.

16 - Steven Spielberg screened E.T. The Extra Terrestrial to the President of the United States at the
White House on June 27th, 1982.

17 - Yoda from Star Wars appears in the movie. George Lucas said  "I hadn't seen the movie and when it was completed, we had a screening for ILM which I attended.  Steven warned me there was something special in the movie for me.  So we are watching and suddenly Yoda showed up in the film.  Everybody in the audience cheered, of course, being it was an ILM screening.  I was amazed and flattered.  It was a very funny moment."

18 - E.T's species makes an appearance in Star Wars: The Phantom Menace.  The name of these species in the Star Wars Universe are Grebleips which is Spielberg backwards.

20 - In the original script the boys are playing Dungeons and Dragons but this had to be cut when the production company was not allowed to use the name.

21 - Spielberg explains ET is more plant than anything else.  "He's not a mammal, or bird, or fish.  I think he's a vegetable."  He also mentions how they decided to make his insides when they glow to look more like a plant.

22 - Some scenes that never made the final version includes E.T. healing J.R. from Dallas after watching him get shot on TV.  Harvey the dog being healed after being hit by a car, E.T. going into a fox's den and seeing several cubs and their mother, and of course the famous one featuring Harrison Ford as Elliot's school principal.

23 - Another scene that was cut featured the film's screenwriter, Melissa Mathison who was playing a nurse. 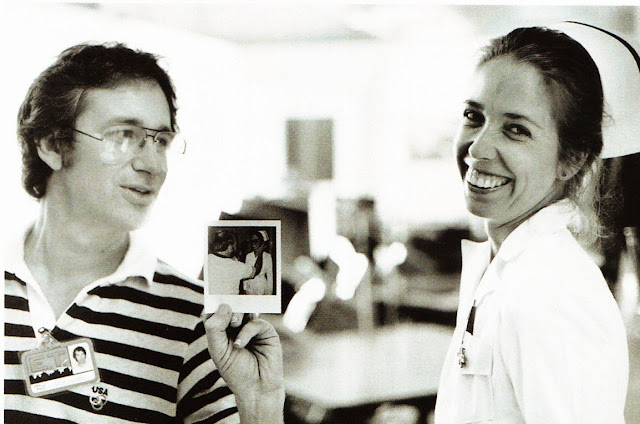 24 - According to the novel, E.T. is over ten million years old.

26 - E.T's spaceship was designed by the legendary Ralph McQuarrie.  McQuarrie said he wanted the ship to have a Jules Vern Victorian look.

27 - This was Steven Spielberg's first feature film that was shot in the 1.85:1 aspect ratio.

28 - Henry Thomas would have another encounter with aliens 11 years later as he played Grey Hayes in the alien abduction thriller, Fire in the Sky based on Travis Walton.

29 - Sarah Michelle Gellar auditioned for the part of Gertie.

30 - A sequel was penned called E.T. II Nocturnal Fears by Spielberg and E.T. writer Melissa Mathison.  The sequel that never was, was going to, more or less pick up straight away from the end of the first movie and with one distinct feature.  The E.T's are evil.  Steven Spielberg said himself in a past interview "I think a sequel to E.T. would do nothing but rob the original of its virginity. People only remember the latest episode, while the pilot tarnishes."  You can read the script here.

31 - Elliot's last name is never mentioned in the film,

32 - At the auditions Henry Thomas thought about the day his dog died to help with his expression of sadness.  Steven Spielberg was watching and so impressed with the performance he offered him the job on the spot.

34 - The film was nominated for 9 Oscars at the 55th Academy Awards including best picture.  It lost that category to Gandhi which was directed by Sir Richard Attenborough.  He would later appear in Steven Spielberg's Jurassic Park as John Hammond.