This morning, Entertainment Weekly published its Fall TV preview, highlighted by the forthcoming second season of The Mandalorian. Check out EW's coverage here.
Season two debuts on Friday, October 30 on Disney Plus, continuing the wildly popular series that headlined Disney's streaming service when it began on November 12, 2019.
The preview featured alternate covers, with Din Djarin and The Child.
There wasn't much in terms of speculation or reveals for the second season. There have been plenty of rumors about casting and character appearances. The article does reference the scope of the show expanding a bit, which makes a lot of sense. Season one was a fairly tight story in terms of the environments and scope in relation to the larger Star Wars universe. Logic would dictate the second season "swims to a deeper end of the pool" in this regard. 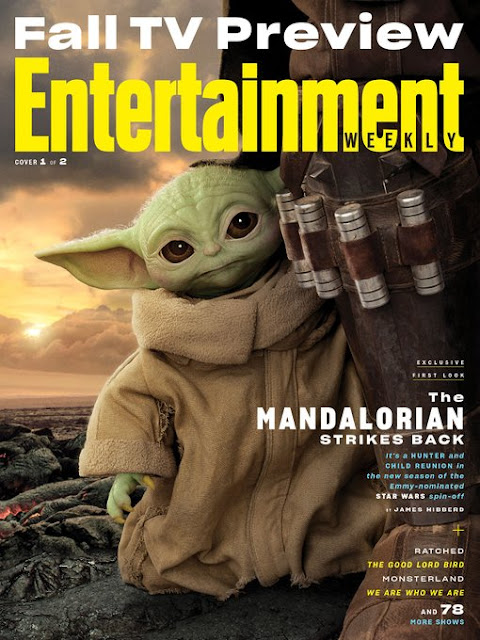 Gina Carano, who plays Cara Dune, was coy about some of the casting and character rumors for inclusion in season two. "Some are true, some are not," she told EW. Whether the rumors, or Gina's assertion are true, remains to be seen.
One actor who has been visible with his comments regarding season two is Giancarlo Esposito, who plays the enigmatic Moff Gideon.
"He has access to all this great technology at his fingertips and he knows how to use it," he told EW.
Gideon is a character I am most anxious to learn more about. The show is set five years after the events of Return of the Jedi, after the defeat of the Galactic Empire. Gideon's presence, along with his phalanx of stormtroopers and death troopers seen in Episodes 7 and 8 of Season one, show that clearly the Empire has a remnant that is still active and effective. How did Gideon survive the fall of the Empire? Where did he go? And for me most chillingly, how did he come to possess the Darksaber. The Darksaber was last seen - within the timeline of Star Wars - in the hands of Bo Katan in the fourth season of Star Wars: Rebels. Bo Katan was a Mandalorian, so there's clearly background to the Gideon vs. Mandalorians prior to the events of The Mandalorian show. Fun stuff to imagine here.
One other thing I'm curious to observe is the use of The Child, a.k.a. Baby Yoda. He took the audience by complete surprise last fall and has gone on to become a phenomenon, especially in the realm of consumer products. But more about that in my forthcoming Galaxy's Edge post later this week.
Is there a rise of over-exposure for The Child? The less-is-more approach was clearly effective for the show during its first season. He rarely occupied the center of the action or the plot, but was enough of a presence to move it along extremely well. Will that formula hold in the second season?
Dave Filoni, in my view, is a very detailed, but disciplined storyteller. He knows how far is too far, and in 11 combined seasons of Clone Wars and Rebels, toed that line brilliantly. Is Jon Favreau equally as disciplined?
A Season three has already been confirmed by Favreau, so we know season two is not the completion of this story, just another piece of the puzzle. I can't wait to continue this journey.
Brad Monastiere
I live in Michigan and worked in higher education. Been an unconditional fan of Star Wars and Indiana Jones for decades. Follow me on twitter @bmonastiere