EXPLORING DISNEY WORLD IN THE ERA OF COVID-19 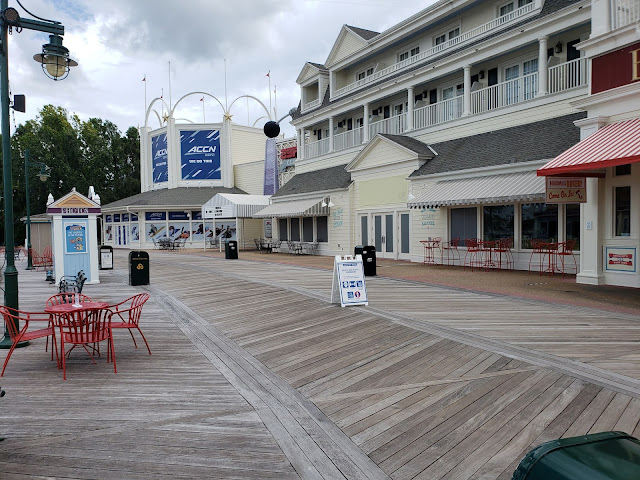 This is the third part of impressions from my trip to Disney World at the end of August/early September. This part is probably the most widely relevant, talking about what it was like to explore Disney during this awful pandemic.
I must stress first of all, that I have been back from Disney for more than two weeks and am perfectly healthy. Dealing with the spread of the virus in the state of Florida, which from a state government standpoint has done a poor job at mitigating it, was a huge concern of mine. So my wife and I took an abundance of precautions, like packing more hand sanitizer than we needed, wearing masks all the time, etc. It has been a source of relief that we both got home fully healthy.
Now, a distinction should be made between the state of Florida and Disney property. They very much are two different jurisdictions. From when Disney shut down on March 31 until its reopen on July, it put its best minds to work on how to reopen, but safely.
Test passed. With flying colors.
We attended Hollywood Studios twice, Epcot twice and Magic Kingdom once. At all three resorts, two new things were immediately evident: hand sanitizer stations everywhere - and I mean everywhere. And second, stickers placed on the ground in six feet margins, for every line to every attraction. For the most part, people were paying attention to those ground stickers. They were a handy way for people or parties to be mindful of where they were in line. There were exceptions of course, with the common element typically being lost in looking at one's phone. When we did run into those "wanderers," we made it a point to create distance ourselves. Paranoid? Maybe. Smart and safe? Absolutely.
Being in Florida in late August means one thing and that's humidity. And boy was it humid while we were there. The heat index was over 100 at some point, every day we were there. Wearing the mask was an added challenge. If you're torn about what kind of mask to wear in the heat, I strongly recommend a paper mask, the one that is light blue on the outside and white on the inside. These aren't normally made with strong strings to go over your ears, but they are considerably more comfortable than the cloth masks. It was a pain, but our approach was, we love being at Disney, and this is just a reality we have to accept at this point in time. 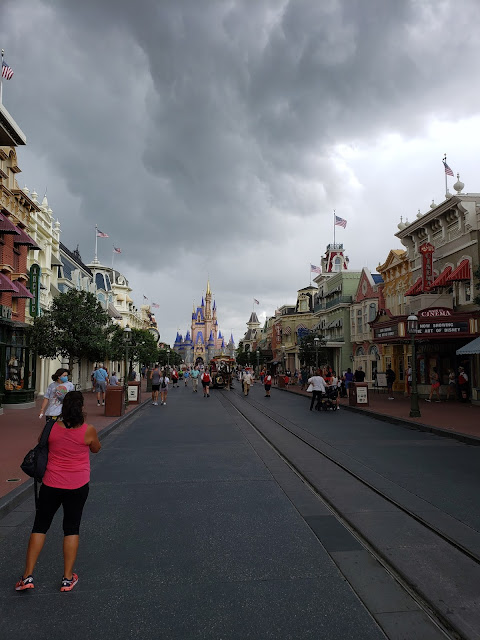 There's a good side to all this. If you've been to Disney more than once, a mountain to climb is always the crowds. There were very few people anywhere on property while we were there. The photo at the top of this post is one I took the day we arrived on The Boardwalk in the middle of the afternoon on a Thursday. A photo like that taken in conventional times would show bundles of people walking around, enjoying the sun and atmosphere.
Having the parks, almost to yourself, was surreal. At Epcot, we didn't wait in a line for anything. The time it took us from approaching an attraction to getting onto it was only the time we spent walking through the queue.
Take a look at that photo two paragraphs above. That's Main Street USA in Magic Kingdom in the middle of the day. Normally, you'd see wall-to-wall people just about any time of day in that location. It was almost spooky how empty it was. 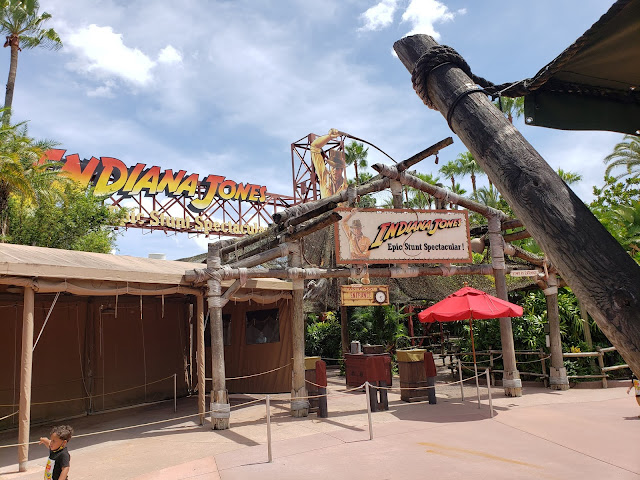 There was a downside to all this elbow room. Many restaurants and attractions I enjoyed were closed. The Indiana Jones Stunt Spectacular, the Star Wars Launch Bay and the Star Wars: Secrets of the Empire Virtual Reality experience in Disney Springs were two in particular that I missed. In the era of COVID, it's understandable why those two in particular would be closed. The stunt show typically has a packed audience inside its arena, and for good reason. It's an awesome show. In the Secrets of the Empire attraction, guests have to put on helmets and backpacks in order to participate in the show. Not things you can have right now. The Launch Bay was my favorite retail spot for my Star Wars collecting hobby. The building was repurposed to be a rest area for people looking to retreat from the sun and heat and not wear a mask. There was nothing to replace the Launch Bay in terms of higher-end collectibles, even at Galaxy's Edge.
So it was a very mixed bag. The lack of crowds and lines were a luxury I never expected to experience at Disney. The masks were a pain, but masks are simply a necessity right now. But I give Disney all the credit in the world for being able to put together a plan to do its best to ensure the safety of its guests.
But if it's a choice between no crowds and no virus ravaging our world, put me on #TeamCrowds.
Brad Monastiere
I live in Michigan and worked in higher education. Been an unconditional fan of Star Wars and Indiana Jones for decades. Follow me on twitter @bmonastiere