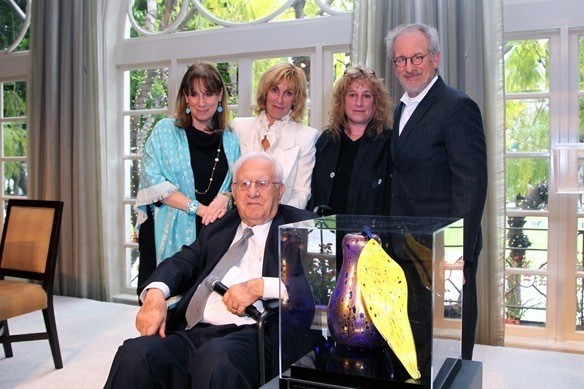 Sad news as we learn Steven Spielberg's father, Arnold Spielberg has died at the age of 103 from natural courses.  According to a statement, Steven was with his father when he died.  Steven said about his father, “You are our hearth. You are our home...When I see a PlayStation, when I look at a cell phone — from the smallest calculator to an iPad — I look at my dad and I say, ‘My dad and a team of geniuses started that.’”

Variety tells us:
In addition to Steven, he had three daughters, Anne, Nancy and Sue. In a joint statement, Spielberg’s children said their father taught them to “love to research, expand their mind, keep their feet on the ground, but reach for the stars [and] look up.”

Due to the circumstances and safety precautions around the ongoing pandemic, a celebration of life will be held at a later date, tentatively set for fall of 2021 and aligned with the Jewish tradition of unveiling the headstone. The Spielberg family has asked that in lieu of flowers, donations be made to the National World War II Museum in New Orleans or the Jewish War Veterans of the United States of America.

Arnold Spielberg helped revolutionise computing when he designed the GE-225 mainframe computer in the late 1950s. The machine allowed a team of Dartmouth University students and researchers to develop the BASIC programming language, an easy-to-use coding tool that quickly spread and ushered in the era of personal computers. Bill Gates, Paul Allen, Steve Wozniak and Steve Jobs all used the language when they started building their digital empires.


Back in 2016 we brought an exlusive clip of Arnold Spielberg talking about the Cold War and how he remembers this period and flying for his country. The clip being part of a DVD extra for Bridge of Spies.
From everyone here at The Bearded Trio we would like to offer our most sincere condolences to Steven, family and friends during these difficult times.