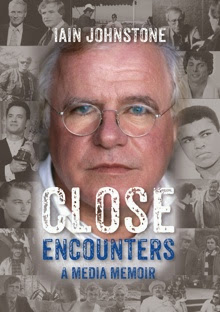 I was lucky enough to have been sent a copy of the superb book, 'Close Encounters' - A Media Memoir by Iain Johnstone published by Spellbinding Media.

Author and broadcaster Iain Johnstone is the former presenter of Film ’82 and Sunday Times film critic. He co-wrote the screenplay for the film Fierce Creatures with John Cleese and has filmed eight documentaries with Steven Spielberg.

It was this last fact that particularly peaked my interest and was looking forward to finding out in the book what Johnstone had to say about the movie director and if he had any interesting stories to tell. I wasn't disappointed. In fact there is a whole chapter on Steven Spielberg. Here are just some of the interesting facts I found out about Steven Spielberg:

Although Steven makes daredevil adventure movies, he freely admits he is still a bit of a wimp himself when it comes to physical challenges. At the opening of the Jurassic Park water ride at Universal, he made a point of getting out of the tourist raft before it made its near-vertical 85-foot drop into the tropical lagoon.

At the same event, Spielberg kept passing notes to Kate Capshaw via Iain. He admits he couldn't resist looking at a couple of the notes. One said 'will you star in my next film?' and another back to Spielberg said 'I might.' Of course this didn't happen but she did become his wife.

Steven told Iain Johnstone that Temple of Doom had a couple of strong swear words and at the Royal Premiere he had been instructed to cough loudly in Princess Diana's ear when they were said.

At Martha's vineyard during the filming of Jaws Spielberg and Dreyfuss, both bachelors, had some fun in the evenings with the sun-kissed girls who were holidaying on the island. Richard told me Steven lost his virginity that summer, Steven maintains that this was untrue and that Richard was just pissed off because he stole his girlfriend. The debate remains unresolved.

I can't recommend this book enough. But don't take my word for it. Spielberg himself recommends the book too. “Get Iain Johnstone!” – Steven Spielberg.

Its packed with inside stories on Steven Spielberg, Tom Hanks, Marlon Brando, Monty Python and the set of Superman to name a few. For any Spielberg fan this has to be in your collection.

Iain Johnstone has enjoyed a career unlike any other and his revealing and affectionate memoir is a superbly engaging look at a life spent in journalism, television and documentary filmmaking. A captivating account of his role in many of the seminal films and TV shows of the 20th century, during his five decades as a TV director and interviewer he met and knew the most popular movie stars, actors and celebrities of the 20th Century. Close Encounters is as funny and engaging as it is insightful.

From lunches with Clint Eastwood to sailing on John Wayne’s heavily armed motor torpedo boat, Johnstone’s enviable access and keen sense of detail illuminates the world behind screen stardom and exposes the trials and tribulations behind a career that witnessed and created great changes.